SMOD Tactical has been quiet lately, But Delta 6 soldiers on toward a release this year. New screenshots and information included.

We apologize for the delay in bringing this news update. There were several issues that had to be addressed before we could bring another update to you.

Thanks to feedback from the last update, weapon balance and animation has continued to be tweaked extensively for the best possible shooting experience. Since Delta 6 promises to introduce a large number of sweeping changes, there are some changes in Delta 6 players should be aware of.

The SMOD Menu System: This has been mentioned in past updates, but the configuration map has been tossed aside for the ability to change several settings from the main menu. Because of this new system's impact on certain gameplay and graphical elements, it is important that you configure these settings before entering gameplay or you will not have the intended experience.

Cheat Weapons: As you might be aware, Delta 5.5(6) has a number of "Cheat Weapons". Which are mostly over-the-top action movie weapons like Dual Pistols/SMGs/Shotguns, A Minigun, C4, A Revolver and the Desert Eagle. While the Revolver and Desert Eagle have been kept, The rest of these weapons have been cut. Please be aware that this decision was not made lightly. And was only done after asking for the opinions of our players at the SMOD Tactical Forums. Which were found to be mostly in-favor of the cuts. We understand some might be saddened by this, but please understand that these cuts were made in the best interests of gameplay. Due to SMOD's weapon limit, some of Delta 6's new weapons would not have been possible to add without these cuts. These cuts do not affect the arsenal of SMOD's own cheat weapons (Shovel, Strider Cannon, etc) which remain in Delta 6, but officially are unsupported and not part of the intended gameplay experience. 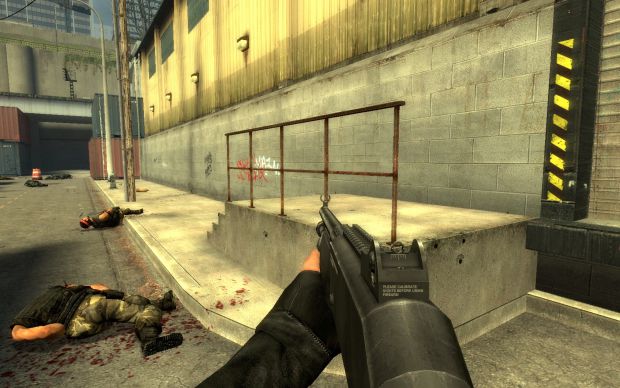 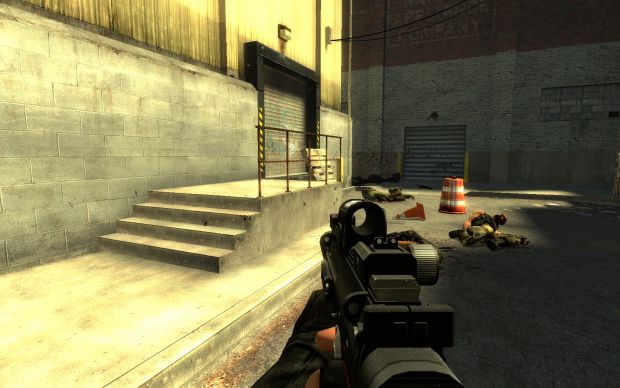 Aside from those pieces of information, we have two new screenshots of community-made models implemented as weapon in Delta 6: The Benelli M1014 Shotgun and the MP7 PDW.

We know it has been a long wait for Delta 6. But the end is nearing: Delta 6 is expected to release this Summer! I am confidant that Delta 6 will reach this release date this time. Further news updates are being planned to be released here every two months until Delta 6's release.

This made my day, thank you!

D: NO MORE MINIGUN?? THIS IS MADNESS!

in delta 5 the minigun was cool

i think if you wont zombies, you need play zombie games this is a tactical one...

That minigun made my game crash with over-the-top-ness anyway, so yeah.

can we please make this multiplayer?

SMOD (and thus SMOD:T) is strictly built off the single-player base and since it's not open-source, it's impossible for anybody but The Author to make huge changes like that. He's already got this request countless times before, too.

It sucks, I know.

There was an SMOD Tactical multiplayer mod called SMOD Damage/Close Contact, but it's been dead for quite a while.

The C4 would have been nice to keep, i loved the counter strike styled gameplay where you would have to infiltrate and plant the bomb

Looks great! I don't care about the cut, if I wanted a large number of over exaggerated weapons I would just play SMOD Redux(Version 8!).

Anything got irons on it this time around rather than eotechs?

Sweet, glad to see this isn't dead after all.

It's been quite some time since I last played SMOD Tactical, but it's an experience that can't be forgotten. I too am in favor of ditching the "action" based weapons for ones that much better fit the over all gameplay design aesthetics.

I'm sorry to hear that HL Deathmatch will no longer be supported, but am more than happy to hear of the integration of more CS maps. Smart thinking that more than makes up for the other loss.

This mod's IN rock solid good hands. And I'm looking forward to the next release.

Onemanshow and at least one other SMOD:T member (Useful aka "Business") are working on mapadds for the release itself.

There's also a project underway by other SMOD:T members to make a "expansion pack" that will add several new missions, all randomized a fair deal each time you play 'em. It's all good, man. Just give us time, eh? :P

I support all those changes and look forward to the next release, this is one awesome mod!

You guys are still going strong.

this using new version of smod?

If you mean SMOD 2.x for the Orange Box engine, hell no. It lacks features like the custom weapon system that play a big part in making SMOD:T what it is.

i don't think this hl2 single is a good idea. btw any chanse of making a coop or multiplayer out of smod?

read above, it is not possible until "the author" makes it so.

Glad to hear these news!

I can't wait! Thanks for the great update :D

Finally they removed the Minigun... it make SMOD:T crash and it's very unrealistic...

BTW the only think that i miss are the SMGs...

I think you've made some truly practical decisions in respect of the integrity of the game play experience, and I commend that.

Some of the " cheat weapons " will be sorely missed from the fun factor, but I'd much rather have that sacrifice in favor of truly useful in-game weaponry ( which are some of the best to date ! ).

Also, thanks for staying true to the HL2 atmosphere in the " Half-Life 2 Campaign ". It's half the fun of the game play experience for us true fans of the HL universe.

Amazing work from all of you in the group ! Looking forward to Delta 6 !

One Man Show is doing everything right. In a future release at least add ridiculous action movie weapons again as optional.

However, SMOD: Tactical is meant to be a realistic, single mission mod.

I downloaded your mod, but Im having troubles. None of the weapons seem to work. If I go to console and type in "give weapon_custom10" or "exec all_tactical" it tells me theres no such weapons. All that happens is a load of ammo drops around me and I get a line of error messages stating those weapons dont exist.