Much like the other recent devlogs, Defragmented has made a huge amount of progress in the past month or so. I've had time to touch upon nearly every aspect of the game and improve it for the better. 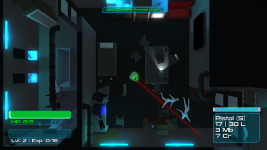 This screenshot shows the current visual state of the game. As compared to the last update, a great deal of things were improved upon. Some of the most apparent things are the numerous new camera and lighting effects in the scene. This greatly aids in setting the mood of each level right from the start. 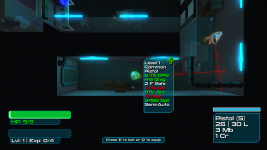 One major rework this update pertains to the item and loot system. As an ongoing effort, I am constantly balancing drops and the procedural loot algorithms to provide an engaging experience without becoming too easy. The coloration and new comparison symbols on item tooltips allow the player to quickly see what stats will be changed by equipping a new item. 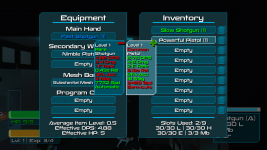 These stat comparisons are especially helpful in organizing equipment in the inventory. Upon selecting an item and mousing over another, the user can immediately see what stats they will gain or lose for each item. The game even provides a simplified comparison based on overall DPS in the form of the plus/minus symbols. If the player is simply going for the highest damage per second, they can follow the symbols and skip reading stats altogether. Players who desire more specialized stats in certain categories also have the option to read through each item tooltip. 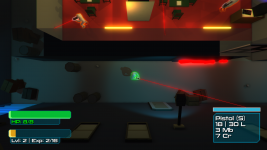 Another large addition since the last update is the second level. This level is a combined outdoor/indoor level of a restaurant and the surrounding alleys. The players are given many more options in this level as compared to the first. Some may decide to bust straight through the front doors, guns blazing. Others may prefer to sneak around the back and attract less attention. 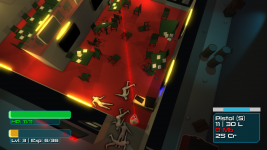 Above is an example of a player storming the front door and making it out alive. Enemies and AI have had numerous improvements, allowing them to act in groups, search for the player, respond to nearby noises, and even aid each other in combat. These features, along with everything else, were thoroughly tested in our first two public demo event for Defragmented. 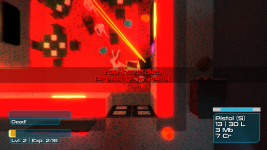 Over the past two weeks, we've been able to bring the game out to two live demo events and have a wide array of players go through the two available levels. The wild shouting and cheerful behavior of many players was a great sight to see. Regardless of their countless deaths, most players did finish both levels of the demo.

Overall, the game received incredibly positive reviews. Many players were thirsty for more. While they were enjoying the game, I had the time to watch the numerous gameplay patterns that emerged from new players. This helps me better balance and fine tune the items and levels to provide a more enjoyable experience.

There's plenty more on the way in addition to the massive amount of recent changes. One thing I did not explicitly mention was the upgrade from Unity 4 to 5. While this does entail many unique features, the most noticeable is the overall increase in quality seen in lighting and environments of the screenshots above. Feel free to reach out to me on twitter or even leave a comment here if you have any feedback or questions!