It's been a little while since Defragmented was initially announced. The main reason for this is because I was participating in both the 7DFPS and Procjam game jams. We ended up creating a procedurally-generated ocean exploration and survival game named Nauticalith. Since then, we have decided to continue development on Nauticalith and make it in to a full game. If you'd like to keep track of the progress on that project, check out it's IndieDB page for dev logs, screenshots, and more.

Now that I'm done devoting all of my time to a game jam, Defragmented development is back in full swing. The most recent updates focus mainly on the stuff that drives most Action RPGs - loot! The most straightforward loot that you'd expect to see is a form of money. In this game, money comes in the form of Credits. Given that paper cash is a thing of the past, a sleek new currency design was in order. You'll see credits drop often, and sometimes even get multiple credit drops from one enemy. 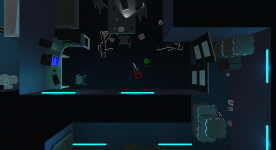 As you can see in the image above, drops are colored by rarity. This may be familiar to many RPG players. It's just a simple way to see how rare (and powerful) the item is at a glance. The rarity scale goes (from least to most rare) white, green, blue, purple, orange. Right now items are simply outlined and shaded in their appropriate color. This may change later on - perhaps a glow effect will be added.

As for the section everyone's eager to hear: guns! There are almost endless possible combinations of gun stats that can be applied to any weapon drop. To break things down, there are 5 gun types: Pistol, SMG, Shotgun, Rifle, and Energy Weapon. There are a number of stats that vary based on gun level, type, rarity, and a few other factors. These include things such as: Reload Speed, Damage, Fire Rate, Magazine Size, Bullet Speed, and more.

Guns share total ammunition between 3 types: Light, Heavy, and Energy. Pistols and SMGs use Light ammo, Shotguns and Rifles use Heavy ammo, and Energy Weapons use Energy ammo. This allows the player to hold a variety of weapons for different situations without having to worry about ammo for every last one. Enemies will drop weapons and ammunition on death just as they do with Credits.

I'll go more in-depth on some of these systems as time goes on. That's all for now!