Many people have been worried by the lack of updates recently. No, we haven't got lazy, in fact quite the contrary :) We've been awfully busy at work. In this newpost we'll talk about new features like deferred lighting and detail textures.

In the past months, I've been wondering how to approach the problem of lighting inside hangars and on ship hulls. So far, I had only been using a single directional light: the sun. The majority of older games pre compute lighting into textures (called lightmaps) but clearly this couldn't work well in the context of a procedural game, where content is generated dynamically at run time. Plus, even if it did.. Imagine the amount of texture memory needed to store all the lighting information coming from surfaces of kilometers-long battleship!

Fortunately InfinityAdmin found a solution to this problem: deferred lighting. If you want to know all about this lighting technique and how it's implemented in the I-novae engine, make sure to check out the latest article on the Infinity website. 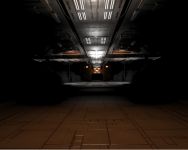 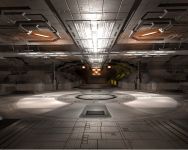 Many more things have been worked on in the last months. InfinityAdmin has implemented a detail textures feature in the engine. Again great progress has been made on the infamous terrain engine, and while it's still not finished it's getting closer everyday. At the moment it's on hold, as he wants to progress a bit on the gameplay and server side. We'll probably come back on it with a dedicated journal and more details once it's complete. Furthermore the dev team has been working on recreating the Earth ingame and there has been some focus on networking security, both things we can't talk a lot about for obvious reasons.

Really impressive how these features keep getting piled on. Really nice work!

Hell, it's about time for an update from you guys.

The second screenshot is awesome. Looks so complicated and beautiful.

It's remarkable the amount of detail you put on this, I mean, this an MMO, right ?

Looks brilliant as always... the addition of Deferred lighting with Instant radiosity is superb, and the detail texture with its normal is excellent.. very nice progress...

That lighting is just pure awesome!

ID called, they said stop making their games obsolete before they're out :D

I'd imagine this is what Doom4's interiors would look like.. Impressive stuff as always guys.