A new server update plus an insight of our next beta.

Build 2.5d for dedicated servers not only brings some important fixes and gameplay changes, it also adds some features meant for competitive play and clan matches. There isn't needed any client update to enjoy this version, just an updated server.

- notoriety restart after each round
- cvar fof_notorietyrate allows to customize how much notoriety gives each action (a multiplier for each action, actually), setting it to 0 disables any increase. Only works if tournament mode is enabled.
- Starting notoriety can be customized more freely (15-75 range)
- no maximum notoriety limit
- no random objectives


Regarding future updates, we are preparing several things, still soon to talk about them. For the moment check this amazing horse model made by Brad Myers, the same artist who brought to life our mexican bandit. There was horse poo in some maps and no horses around, odd isn't it? Problem fixed! Note that horses will be just animated props, and there is no plan to do other thing with them unless some major change of plans happens. 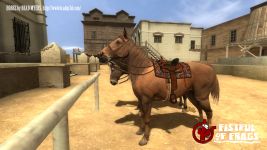 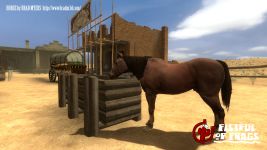 It'll be interesting to see how horses are implemented. Models are excellent!

props=static props or dynamic props....you cant ride it or anything...its just like a train wich is standing there during the eternity

Yeah, just realized that. I must be tired. lol.

I added some more info after you posted, to avoid confusions :D

Haha! Nice! You guys deserve to be on Steam, hope you get the opportunity! So are the horses animated? And as horrible as this sounds, can they become collateral damage?

Yes,they already have some basic animations, more to come. They cannot be hurt. There's however an interesting possibility if they are implemented as NPC's. Damaging a horse would result in FF penalty (horses won't be killed in any case), and they could kick players if someone stays in the wrong place and horse gets nervous heheh. Yeah, perhaps adding them as some sort of static NPC makes more sense.

LOL! Yes, players getting kicked in the *** if they stand behind too long would be genius :D

cool!
Nice ryell, Will be nice to see it in motion

Really nice horse model but I was hoping that you could be able to ride them aswell, for perhaps a special gamemode or something. Still, I hope that you can kill them. :U

wow those horse models look incredible!!!
Its a shame you cant use them, though I understand that it would make a huge change on the gameplay.
Nice work, keep it up!

Amazing horse models guys, really liking where your game is headed lately, keep it up!

AWESOME! I wanna ride them horses :(

Mighty fine lookin' horse you have there.

I'm glad you guys dig the horse model. I can't wait to see it in game for myself. Thanks a lot for the plug R_Yell!