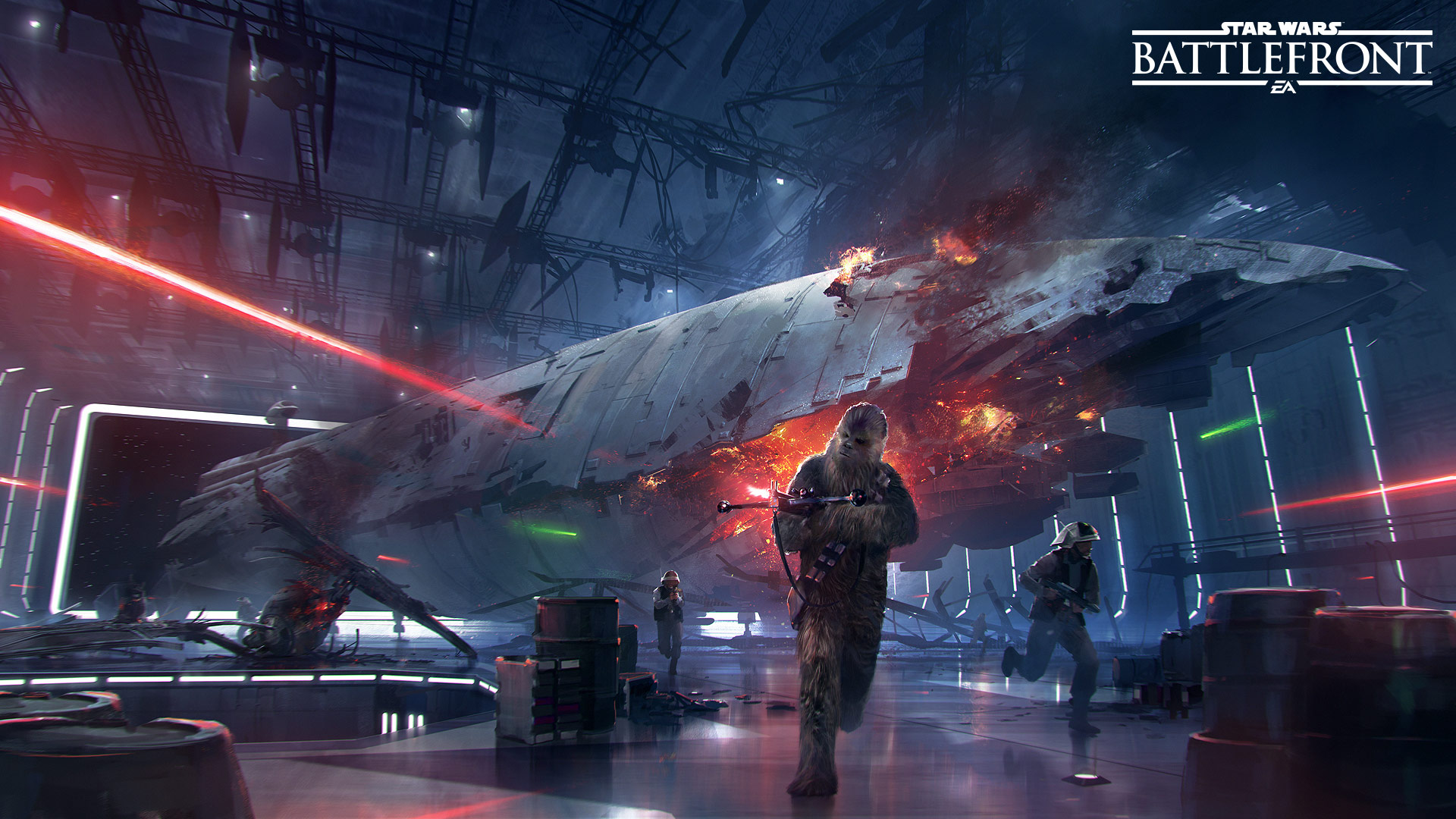 Everyone’s favorite Wookiee, Chewbacca, and the Trandoshan hunter Bossk make their debut on the battlefront as two new playable heroes in the Death Star digital expansion. Both were designed around the pillar of “mayhem” with the hope that hero encounters in the otherwise orderly Death Star are more dynamic than they have ever been. Here are some key details on these iconic characters to make sure you are ready to board one of the deadliest battle stations in the galaxy, the Death Star. 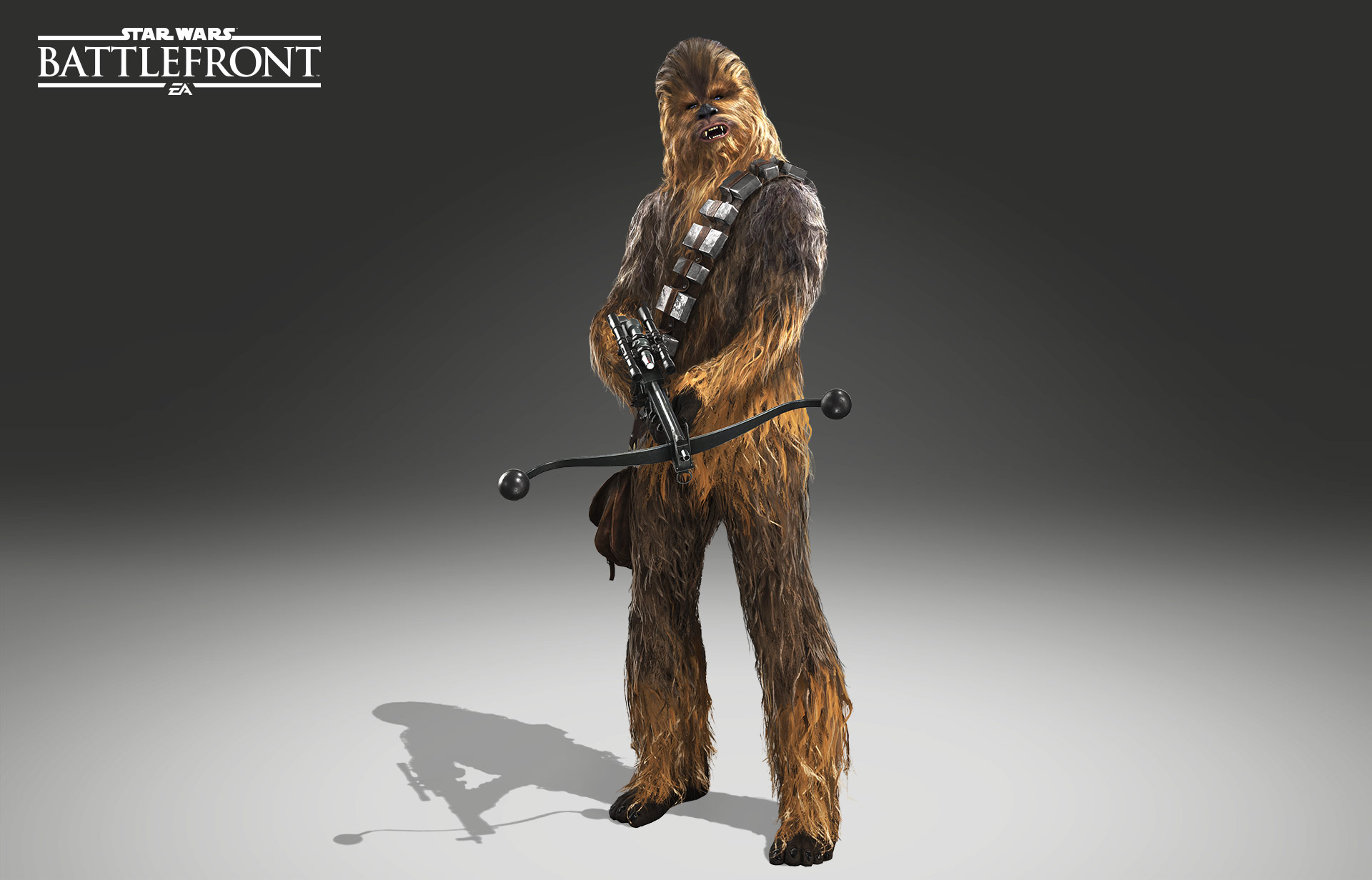 Defining Chewbacca in the game was both scary and exciting. He is such a great character to work on and there is such passion around him! He has to be strong, supportive, skilled with a blaster and a great technician. I loved trying to translate his character into the game abilities and hope you have a lot of fun playing him.

I remember playing the Star Wars™ roleplaying game many years ago and Wookiees could somehow withstand lightsaber attacks without taking much damage, which always lead to fun situations. That is of course not what we tried to aim for in the Death Star expansion, but Chewbacca has more health than most heroes and a small amount of armor that allows him be the much-needed Rebel tank. Chewbacca may not move as fast as the other Rebel heroes, but his damage absorption more than makes up for it!

Armed with his signature bowcaster, Chewbacca can deal out even more damage than he can take. You will find his bowcaster even more powerful than the troopers Star Card as it initially only shoots one explosive bolt and doesn’t have a hold and release behavior…but it does have its own tricks.

Chewbacca's trait is tied directly to his iconic weapon. For each trait level, he will shoot one extra bolt to a total of 4 explosive bolts. Combine this trait with his first power, Multi-Bolts, to total 8 destructive bolts per shot. The furious firing brings some of the “mayhem” we talked about to the Rebel side with a great area-of-effect damage ability that has yet to be seen for that faction.

The Multi-Bolts ability will, for a short time, double the amount of bolts per shot fired by Chewbacca. This ability complements his trait and should be used at the opportune moment for maximum effect.

Chewbacca's bowcaster is so symbolic of his character that we really wanted to make it the center of his abilities in the game. This is also our first ability and weapon where you can modify the area of damage, so we're very excited to see how players will utilize that ability.

Developer Tip: Sometimes you’ll need to use your multi-bolt ability before you’ve charged it to its maximum capacity. Still, try and charge it as much as you can because at full power it forms a wall of death that will strike fear into your opponents’ hearts, especially if you’re close to a villain and manage to land several bolts on them.

Chewbacca will be able to improve himself and all allies around him on the battlefield. With a Mighty Roar, he will inspire rebel soldiers and give them the level three Berserker effect and very high armor for a limited time. Chewbacca will also be affected by the roar and gain armor and damage. Inspired Heroes will get the armor effect but not the damage increase.

Chewbacca is a loyal partner, the companion you want at your side in the heat of battle. We really wanted to transcribe that into one of his abilities. Just as Leia’s leadership skills translate to her deployment of Honor Guards, we felt that Chewbacca’s roar is just the thing that would strengthen troop morale and allow close Rebel troops a second wind in their fight against the Empire.

Developer Tip: Try to synchronize with your team, just when you're about to do a push: Roar and launch your attack.

Chewbacca displays his strength by smashing the ground and damaging all enemies in a large area.

We wanted to show Chewbacca's strength but also compensate for his low speed. This ability will give him some extra reach and increase his area of effectiveness. We also didn't have any area of damage ability similar to this in the game yet, so it felt like a perfect fit to add this power to the game.

Developer Tip: Jump down from a ledge and activate Ground Slam to surprise your enemies. 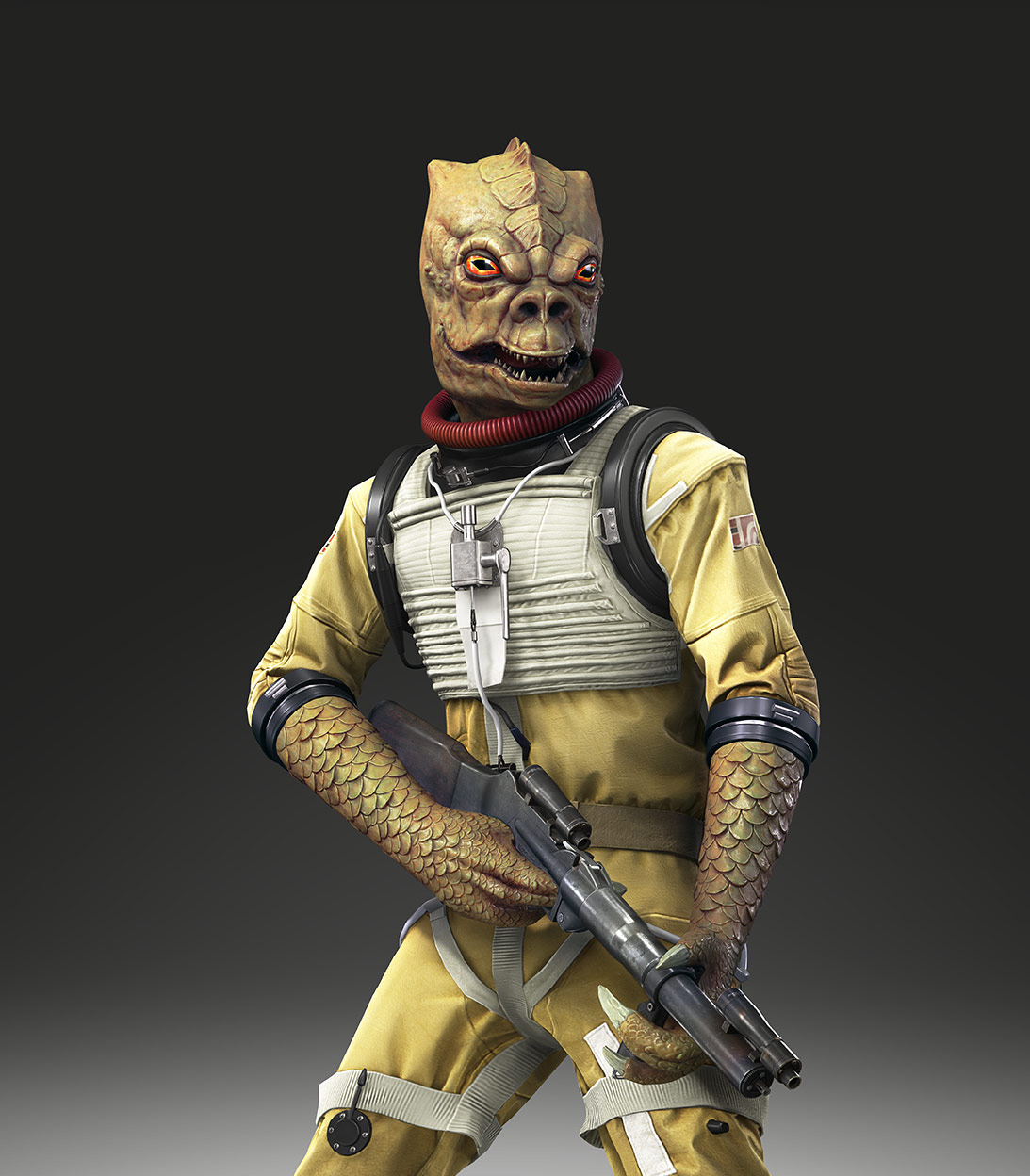 Bossk is one of my favorite characters in Star Wars, definitely my favorite bounty hunter. I was so happy to get the Trandoshan-Wookie face-off in the game. We took a lot of inspiration from Trandoshan lore, particularly the Clone Wars animated series, which was a great feeling to bring to life in Battlefront. I wanted Bossk to feel like a destructive and nasty opponent who would also have the skills to escape dangerous situations. He is an enemy that you just can't get rid of and his sustainability on the battlefront is higher than most.

Bossk will be using his classic Relby-v10, it's improved from the soldier version to have a bit more punch to it.

Bossk will regenerate a percentage of his health with each soldier kill or high damage to a hero. The health regenerated will increase with your trait.

Of course, a Trandoshan needs a regeneration power! We wanted Bossk to feel like the enemy you can't get rid of, the one you have to finish to make sure he is out of the picture for good otherwise he will come running back at you.

With this trait, Bossk is forced to hunt enemy troops in order to regenerate his health. Thankfully, his Predatory Instincts will help him find targets to get back in the fight.

Bossk can switch his Relby-v10 to a Micro-Grenade mode. Each shot will shoot a micro explosive that will detonate after a short time. The grenades will also explode if they come into contact with an enemy.

As we stated earlier, mayhem was a guiding word for both heroes and we wanted Bossk to bring fear to the battle. With his versatile weapon he’ll be able to clear packs of enemies or threaten heroes into retreat and panic. The cooldown is quite long, but that is where you use your Predatory instincts.

Bossk can enhance his hunter skills at will. When this power is active, Bossk will have heat vision, faster cooldowns, increased damage and increased sprinting speed.

We wanted Bossk to feel like a predator, a hunter. Giving him a snake-like heat vision was a lot of fun, but it also tends to blend Rebels and Imperials together as a downside. This is why we decided that while Chewbacca is enhancing his friends, Bossk will only enhance himself while his vision is active. Bossk chooses to enhance himself greatly while his vision is active at the expense of some team unity, in stark contrast to the noble Chewbacca’s inspiring roar. This ability is our first ability with no cooldown, you decide when you want it on or off. We feel like this gives Bossk a lot more character and versatility.

Developer Tip: This tip will be for people fighting Bossk: flash grenades are your friend. While his Predatory Instincts are active, Bossk will be more affected by flash grenades than any other character.

Upon using his Toxic Escape, Bossk will leap in the air in the direction he was moving and drop a highly toxic Dioxis Grenade on the spot he was a second before.

Bossk's last power is leveraging a nasty weapon: the Dioxis grenade. Though, Bossk's Dioxis is much stronger and larger than any previous grenade. We wanted him to have an escape move to survive dangerous situations. However, it felt like Bossk wouldn't just leave like that, he would make sure you couldn't follow.

Developer Tip : The area of the grenade is really large and the damage high, even heroes going through your grenade will be highly damaged. Use this mostly to get out of close quarters and put yourself in an advantageous position.