Today we show off the render of our Polikarpov Po-2 biplane, the most produced bi-plane of all time.

Today we have a render of one of the most produced aircraft of all time, the Polikarpov Po-2. 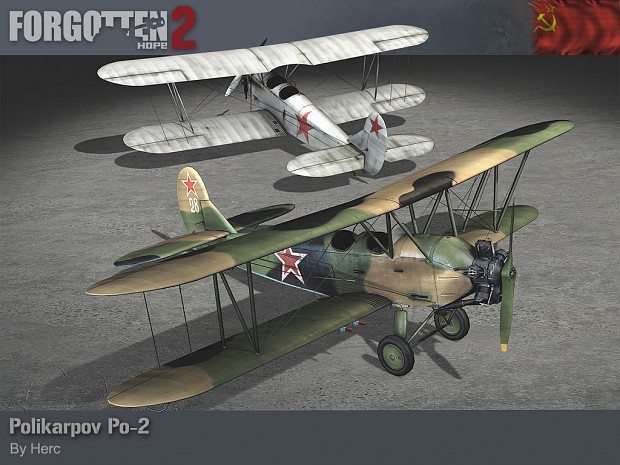 Originally known as the U-2, the aircraft was designed in the late 1920s by Nikolai Polikarpov as a replacement for the U-1. It saw extensive use by civilians and the military. Its application as a crop duster gave it the nickname Kukuruznik, derived from the word for maize. At the start of the war, the Soviet Air Force was using the Po-2 for all kinds of work, including liaison, medivac, reconnaissance and general supply.

Its most famous use was as a night bomber. With a machinegun added to the observer's cockpit and space for up to 350 kg of bombs or RS-82 rockets beneath the wings, it was used in daring low level attacks. The distinctive engine sound, and the near silence of the gliding bombing runs in the dead of night gave these missions a psychological effect in excess of any material damage caused. Perhaps the most notorious pilots were the all female 588th Night Bomber Regiment - the so called Night Witches.

The Po-2 was hard to detect, and a challenging target for fighters to shoot down. Its simple construction could absorb many hits with little effect, the pilots flew incredibly low to the ground, and it was so slow compared to Bf 109 and Fw 190 fighters that keeping on target for any decent length of time was nearly impossible. Between 30 and 40 thousand Po-2 were assembled between 1928 and 1959, and our one was made by Herc.

Our winners for this week's screenshot competition is pizzzaman12. You can view the winning submission here.

We are now accepting entries for the week of May 13th. If you think you have the best FH2 screenshot, post them here.

I just love it! Will there be a few versions ingame or only the bomber?

So this was perhaps one of the better planes of WWII?

being slow can have its advantages

Uhh... This isn't the most produced aircraft ever.

I know, which is why I wrote "one of the most produced".

I know this is far fetched and will likely never happen, but do you think we'd ever see a Pacific Front (Japenese conflict in WW2) addition to this mod?

How much longer 'till the Eastern Front is released? I just got into FH2 a month ago and I am in love with this mod and waiting on the edge of my seat for the Ostfront! To the developers, great work and keep it up!