Take a look at the super early build of the 2D arcade survival shooter.

Death Cabin is a pixelated arcade shooter featuring a man trapped within a cabin as he takes on hordes of demonic creatures.

The player starts the game without any weapon, and thus must obtain a random weapon dropped into the cabin periodically. A key component of the gameplay is the conservation of ammunition - the constant dilemma between eliminating nearby threats immediately or saving some bullets for when things get tough should keep the player on his/her toes. Should the player run out of ammo, he/she will be left with no means of defense; at least, until the next weapon drops. 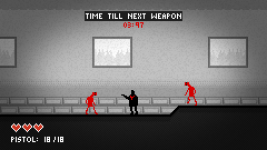 A super early build is now available for download! Any feedback will be most appreciated :)