This is about the life and the death in Zombie city. This is also about the future of zombie city.

In zombie city, there is mostly death people, but there can be som survivors. 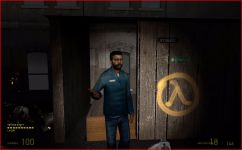 A survivor from zc, better and more detailed pictures will be added later.
I have maked Faceposer for this guy, but i got some problems. Hope some of you modders outthere can help me. Im making it correct in hammer editor, but when i runs the mod, he just stands and doing stuff with hes hands, that also what i want him to do. But... there is no sound, he's mouth are moving, and i have all the sound files in the mod folder, so please help me:)

The Future.
Im telling what to be in the mod.
I'll maybe change the name of the mod. becaus only 1 or 2 chapters is in the city.
Chapters:
1: In the city.
2: In some old bunker like underground roads...
3: In a warehouse looking for a teleporter.
4: Tele porter fails and you lands in th......