Public Beta for DCI: Last Alliance, a submod for Third Age: Total War focused on the War of the Last Alliance in the Second Age of Middle-earth.

6. Once both parts and the patch are installed, double click the 'DCI Last Alliance' icon on your desktop to launch the mod. Alternatively double click the DCILA.bat file in your mod folder.
(DCILA_NoBaiSwitcher.bat will run DCI:LA without the battle AI switcher)

6. Launch the mod by double clicking the 'DCI Last Alliance' icon on your desktop or the DCILA.bat file (DCILA_NoBaiSwitcher.bat will run DCI:LA without the battle AI switcher) 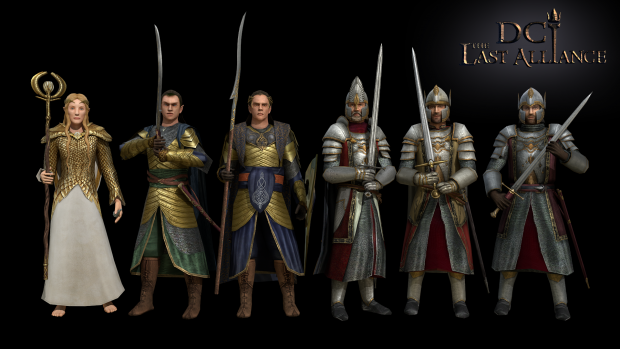 Thank you for playing our mod. If you've enjoyed the mod so far please leave a review, we appreciate it.

Congratulations to the first release!

Been playing for a few hours now, and while it needs a little more spit and polish, it's a very stable build that's very enjoyable to play.

For Frodo! For Ngugi!

I will try to help testing(linux) and reporting.

I have a question! Is possible to create "subfactions" like Rhun to Rhovanion, or make a system of allegiances for both, like first to take a settlement get the subfaction and his troops?

I'm sure it's possible with some clever modding, but it's not something we're looking to implement. That said, some factions get special units/generals if they align with certain factions/fulfill certain conditions. For example: Rhovanion can get access to a special elven unit, and the hill men of the north can get access to boldogs. To get the best out of a faction you can check the faction videos/previews for an overview of all the features.

Thanks Louis!
DCI works well on linux(wine+steam), but whats is the purpose of "cscript //nologo G5BAISwitcher.vbs", can we just use "--features.mod=mods/Third_Age_3" on steam and forget about G5BAISwitcher.vbs?
Can I upload a zip of TATW+DCI to my account on moddb?

The Battle AI switcher is a feature from Germanicu5' AI that is used in DCI. If you don't want to play with this feature you can do so and there is even a DCILA_NoBaiSwitcher.bat file specifically for that purpose. If you're interested you can read more about the G5BAI on Twcenter.net. Can't give permission concerning TATW because it's not our mod. What we might be able to do is upload a zip version of TATW and add the link to DCI's installation instructions.

Thanks again. I ask about the .bat and the .vbs because is difficult to use with linux(with steam), I will read your link thanks.

I will probably start one myself - great Galadriel model.

Massive congratulations on releasing this!

Thanks for making it.

That's strange. Which faction are you playing as?

Same thing with Lorien and Mirkwood.

That's unchanged from vanilla third age. maybe something went wrong when you installed it?

Wait, not my general, the death of an enemy general, and not the splash, the icon, the one that apear on the left. I think is the vanilla one xD. No errors during the install :D

Ah, okay. It's a boat by the way, the mast kind of looks like a cross.

Suggestions:
1 Make a "no garrison script" patch file, for those who want.
2 Eliminate the crossings of Gwathló river south of Tharbad.