2016 proved to be a somewhat intense year in almost any way you look at it. The same can be said for us here at DarkShot Studios! As we brace ourselves for a new year, and all of the goodies it will bring, here’s a look back and some of the events that happened in the lives of ragtag game developers.

Posted by LeftyMcBrandon on Jan 3rd, 2017

2016 proved to be a somewhat intense year in almost any way you look at it. The same can be said for us here at DarkShot Studios! As we brace ourselves for a new year, and all of the goodies it will bring, here’s a look back and some of the events that happened in the lives of ragtag game developers.

We became scientist at the beach 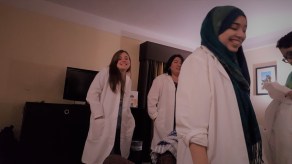 Well, in a manner of speaking. To get ready for TheGameCon in Galveston, we decided to give our ROTii booth a little personality! Seeing as the human characters in the game are scientist, we put on some lab coats, and demoed the tiny robot as if it was a mini science expo. Maybe next time, we’ll up the ante a little bit, and bring some bubbly, legally ambiguous chemicals to really push that mad scientist feel.

If playing lab wasn’t enough, we also had the chance to run two panels at TheGameCon 2016 (We only did one the previous year)! Alongside some veteran developers AND a fellow indie, we got to give a talk about the complex subject that is game dev. We managed to cover a wide range of topics, from tools to workflows. Later on that weekend, we took to the show floor for an exclusive mini panel focused solely on ROTii. Though we may have slipped into rambling about all the fun times and different forms ROTii has taken in its beta forms, it’s always fun to talk games with young people who are just as excited. 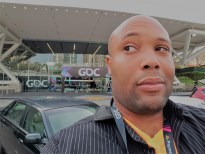 We may be newbies in the industry, but we decided to roll with the big shots for just a week. That week was the Game Developers Conference, or GDC. Located in San Francisco, this event really is the gathering point of developers from all over the world! It was nice to take a break from running a booth, and see what other developers were up to. Not surprisingly, VR was a major component of the event. There were such cool technologies, we were tempted to change our 2D puzzle game into a full fledged VR experience! To be fair though, that could still happen…

Oh, we did actual work too. 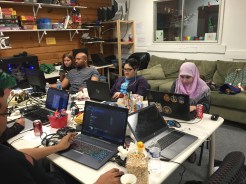 Unfortunately, we couldn’t ONLY do events. Last year saw us work harder than ever to produce our first release. ROTii may seem like a simple concept on the surface, but there were many many ideas we tossed around. There may be a compilation of some of those scrapped ideas in the future, but some were too odd to keep around. Let’s just say; our dear puzzle platformer very briefly took the form of a Mega Man like, fast paced, shooter.

This year is going to be even more crazy, imagine that

For all it’s craziness, 2017 is already set to be intense. ROTii is close to seeing the light of day, and there are some other unmentioned projects that will give us lots to talk about pretty soon! We look forward to sharing our journey with you!