With version 0.11 we have updated all of the game art. We also did a lot of adjustments on the gameplay user interface. Most importantly, we are moving up the release date of version 1.0!

The new build of the game has been released: Daring Adventure - Version 0.11. The link has changed because there were quite a few bugs appearing when the game was loaded from a save file. Instead of giving instructions for dumping the save file and making a new one, we decided to create a new flash link.

You can still access the Indiecade version at the same link: Daring Adventure - Indiecade Version

We also created new desktop standalone versions of the demo:

We decided to push up the release of version 1.0. We would like to have it released some time in July. Here are some aspects that you can expect:

Version 1.0 will basically be the same as v0.11 in terms of content. However, we are looking to clean up any bugs and give a sense of progression through winning elemental attack cards from fights. We will also be implementing more powerful attack cards that have a rare chance to drop as loot. Please let us know if you find anything that you think is a bug. Our goal is July 15th release, but we are willing to delay until the end of July to fix some more bugs.

The biggest addition in v0.11 is artwork. The cards now have a standardized look and feel to them. We decided to make the cards more about the graphics than what was written on them. Below is an example of the old and new Elven Rogue card. Before, your eyes would be drawn to the card number and name written on top. The new format clearly focuses on the rogue herself more so than anything else.

In the top left of the new card graphic, please note a little symbol that appears. That same type of symbol now appears on all of the cards, including locations, heroes, chaos beasts, monsters, and even attack cards. Your attack cards all have a blown up picture on them. You should now be able to match up what is in the picture to what element it represents. This should assist in figuring out location and elemental modifier bonuses when attacking. In the case of the Elven Rogue card, the symbol in the top left represents the wood element. The eleven elemental symbols we have are organized for you reference, below.

The element order shown in the picture is as follows:

If you remember, the element of the location gives you a +1 to attacks when using that elemental attack. In the screenshot below, the Guildhall has the wood symbol in the top left corner. This means that all wood element attacks will gain +1. When attacking enemies, your heroes need to use their preferred element to gain an elemental bonus. Again, looking at the screenshot below, the Dwarf Priest has a holy symbol in the top left. The Fleshrender Spirit monster has a dark symbol. Looking at the control/agonist chart, holy beats dark. Therefore, if your priest utilizes a holy attack against the fleshrender, he will gain +2 to his attack roll. 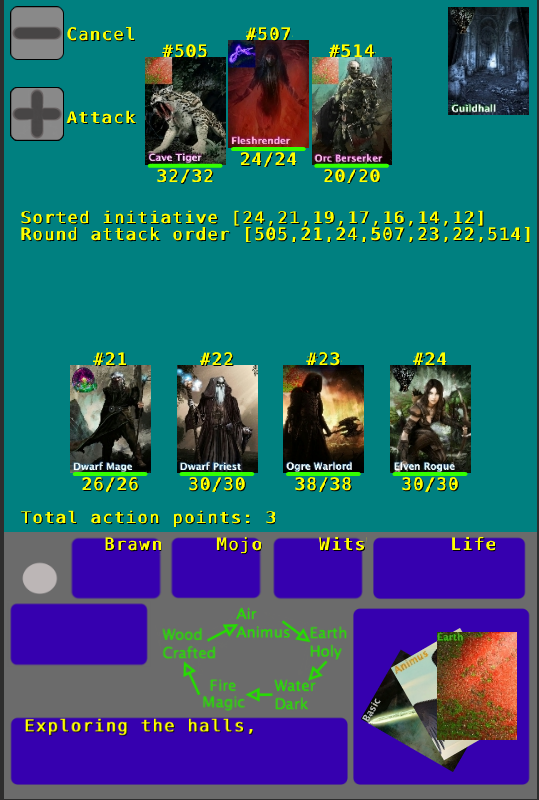 The screenshot was taken after the new card artwork was implemented in the game. While play testing, we found a few smaller changes that we wanted to also include for the release.

1. There was bug we discovered regarding clicking on location cards. If you clicked on a monster, then a location and back to a monster, all controls for the game stopped functioning. Instead of trying to figure out what was causing the bug, we changed the way location cards were reported. Right after the location card is shown, the message "Exploring the ______" appears at the bottom. This gives the game a little bit more of a storybook feel. You might see a message such as: "Exploring the halls, Rogue attacks using a basic attack on a ferocious spirit".

2. The regular backgrounds started looking a little bland compared to the new card graphics. As you can see in the screenshot above, the fantastic artwork leaves the monotone background in the dust. We decided to add in some simple background graphics. It makes the screens look a little bit more dramatic without taking away anything from the card artwork or gameplay.

3. The attributes panel at the bottom of the gameplay screen had some work done on it. The different spots were moved around and made transparent to display the new background. Also, the Brawn, Mojo, Wits and Life were shifted to make them centered inside the boxes.

4. More monsters were included in the game. The number was increased from 20 to 35. The last four monsters in the list are considered rare monsters. They have significantly higher attributes than the lower level monsters. For instance, the CR of a Goblin Horde is around 2.5 while the CR of Pale Sorcerer is around 5.0.

5. Finally, to make the game more understandable, we changed around the overall user interface for game play. Since the new card graphics did not have the card numbers on them anymore, the initiative rolls were pointless. However, we wanted you to be able to see the attack order. So we added text with the card numbers on top of the cards themselves. The hitpoint bars at the bottom did not provide adequate description of what was going on. We decided to have the current and total hitpoints below each of the cards. Lastly, we wanted to clean up the gameplay screen a little bit and removed the lists containing all of the attack rolls.