Damnation City of Death has been Greenlit!

Nuke game mode has been updated. Now it haves radio messaging, new UI, mission parts, dynamic difficulty adjusting according to the part of the mission and the most important of all it can be beaten without huge luck. This is the first update to it, so expect more changes to the game mode during next weeks. 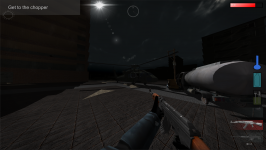 Bug fixes! Before players and zombies could walk through walls when experiencing lag, but now it's fixed. a Bug that caused the player to walk diagonally sometimes has also been fixed now. Some menu problems have been fixed.

Zombies have been updated again. Zombies will now be attracted by gunshots. Large zombies can now duck properly, when they can't fit through a doorway. Small zombies can now leap over objects.

Saved games have been updated. They now save the location of bridges and car wrecks in the world to stop some weird spawns from happening and allowing players to build bases in these areas.

New floors have been added to buildings. There are more car wrecks on the streets. Bullet particles won't fly through walls. Dirt piles have been improved. Various textures have been changed around the city. Park has been updated with new textures and better walls. 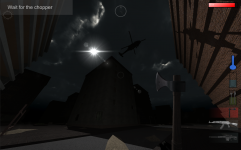