Hello, I am here today to announce a new FPS developed using the Unreal Development Kit titled "Damaged." Players are the most dangerous inmates in the world, and are placed in giant "life-like" environments and forced to fight it out using modern weaponry......

Introduction:
Hello, I am here today to announce a new FPS developed using the Unreal Development Kit titled "Damaged." Damaged is currently being developed by "Damage Studios." We are a team of 6 and we hope to bring you a rich and fun experience for free. Enjoy :).

Story:
Looking back to the Roman ages of our history a company (name pending) brings back gladiatorial games but bigger, faster, and with a purpose. Much like the movie "Gamer," contestants are the most dangerous inmates in the world, and are placed in giant "life-like" environments and forced to fight it out in various situations and styles such as: capture the objective, team deathmatch, and deathmatch using modern weaponry. Each win earns them it ems, cell luxuries, and of course eventually freedom. Damaged is an online only first-person shooter, currently being developed using UDK.

Damaged Back-Story:
Damaged began as a personal project for us, but it turned into being a school project as well once we were able to continue creating the game for our major project in our local multimedia program. The project is currently in full swing and we have a drop dead date for school of April 7, 2011 for marks etc; however, the drop dead date we have is around December 15, 2011 before we plan on going on placement. We wanted to post our progress as we go so that the community could watch and provide feedback. From placement logos to a final product you will see it all. Plus we will be releasing it at no cost using a free to play business model.

Note: This is only a look at what we want to include in Damaged and might not be in the final product but we will try our best to include as much as possible. 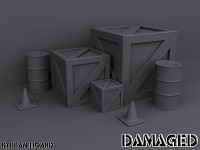 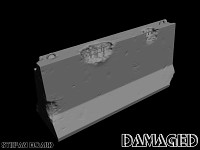 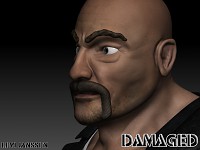 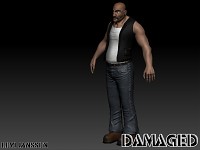 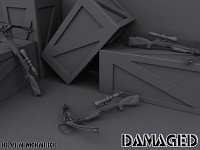 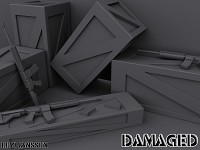 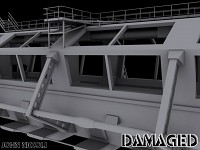 Damage Studios is a Canadian based company, created by six friends from college. Specializing in Game Art, we hope to expand our knowledge of such programs as 3DS Max, Maya, Mudbox, Zbrush, Photoshop, UDK, and other game based and 3D modeling packages. Using our education and online resources we hope to bring the community rich experiences.

sounds great so far! lets hope you'll make it through the release date!

Woah, you already have a ton of models done! :D

I have faith in this.

Thank you :). We hope to show more very soon.