Posted by TychoCelchuuu on Jun 6th, 2010

Damage types are standard and crucial in strategy games. Ie, this unit does 10 damage to armored targets, but only 7 damage to everything else. This creates much more interesting unit combinations and tactics. For example:

At this point, the combinations start to explode. What appeared to be a simple battle is now becoming something much more - we have ambushes, planning, scouting (counter-planning), etc. Where does the rabbit hole end? This emergent depth is one of the big reasons we play strategy games.

By contrast, without variable damage types (payoffs), everything just does damage and there is little maneuvering, tactics or interest. I just build more and better units and so do you. They fight, and whomever built more wins.

But there's a down-side of course - adding these damage types makes the game more difficult to learn and understand. Which targets are armored? How can I see the damage bonus at work? When my army meets your army and mine gets decimated because I didn't realize my units only do half damage to yours, I may get frustrated and leave. For this reason, and because most FPS players aren't thinking in terms of damage types (and don't want to have to read online to see why their one-shot sniper shot didn't kill their target), damage types are largely omitted in FPS games.

For a game that blends RTS and FPS like NS though, damage types are a must. The thing to remember is that damage types will bring all the depth and less of the difficulty if you strive to make them intuitive. This means checking the 'look' of creatures and weapons and trying to be faithful to how players THINK they should fare against each other. 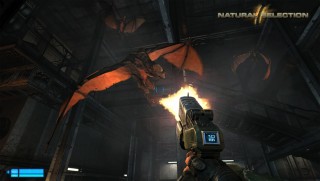 Here are some of the goals for damage types in NS2:

There are more, but these are the basics. With these in mind, here are the basic damage types that are currently in NS2 (in development, not final):

Here are some beneficial effects of these simple types:

Thinking about damage types in this way is also a good tool for evaluating a new weapon or ability. If it seems to fit the same role as another, its role needs to be re-thought.

In fact, now I see some changes that are necessary...

you forgot lizard and Spock

There better be an onos devour as an option. Onos was the best class when you could just devour someone. If people get all pissy about taking to long to be digested. Make it something as simple as, 'Wait to be rescued or press E to end the pain quickly.' The only problem with dieing quickly would be the Onos gets your HP fast but still must fully digest it's prey being the marine.

i think they said no devour in ns2... check the official site, they listed all the abilities of the onos. I think there's gore, a duck/shield/huddle ability (absorbs damage at cost of moving slowly), and stomp (which affects structures only now).

It's kind of retarded that your defenseless in the first place. You didn't loose your weapon while he ate you so you should be able to shoot your way out.

They should give you a knife or something so you can knife the onos in the struggle, maybe really make it vulnerable while devouring a marine (being stabbed from the inside isn't good whilst your in a battle against marines).

very nice, I love strategy and proper damage balance (many games fail to understand how to make weapons different and yet still relevant)

I don't really think this is really something new. Onos already do double damage against building, HMG do half damage to buildings, gas have no effect on heavy armor, etc, in NS1.

All classes are epic and are of my interest!

It's a solid idea.. should work out pretty damn well!

Would those wings look cooler if they were translucent?

Not sure why the Pistol is armor piercing but not the Rifle.

Agreed, unless the pistol is in fact a magnum. Boom baby!

Because the pistol is big, bulky, and spews giant death bullets. The rifle decided it wanted to spray moar bullets.

Obviously nobody's played NS2 yet, but I've played NS extensively, and I wanna suggestion that gas at least have a little bit of effect on heavies.

The dynamics in NS were such that aliens are obviously inferior to marines in lategame when both sides are highly skilled.

Glad you guys have a nice idea going! :D