Daedalus Space Station (DSS) is an international space station, or a habitable artificial satellite, in low Venus orbit. Its first components launched into orbit in 2089. This update is devoted to the science behind its construction.

Daedalus Space Station (DSS) is an international space station, or a habitable artificial satellite, in low Venus orbit. Its first components launched into orbit in 2089.

Daedalus serves as a research laboratory in which crewmembers conduct experiments in biology, physics, astronomy, and performs studies of the Venus’ atmosphere and surface as well as research on the Sun. The DSS is suited for the testing of spacecraft systems and equipment required for missions to Venus’ low orbit. Daedalus maintains an orbit by means of reboost maneuvers using its engines or that of visiting spacecraft. Based on the active number of research projects, Daedalus is able to maintain a range of orbits from 0 to 24.04 per day. Daedalus construction was launched decades before the United Governments emerged, by the 12th countries with the largest Space Programs.

According to the original Memorandum of Understanding between NASA, ESA, Roskosmos, CNSA, ISRO, JAXA, CSA, UKSA, CSAE, CSIRO and ISA, the Daedalus Space Station was intended to be a laboratory, observatory and factory on Venus orbit. It was also planned to provide transportation, maintenance, and act as a staging base for possible Venus terraforming and future missions to Mercury and fossil asteroids. With the United Governments formation, it become the impersonation of the union and globalization as well as the symbol of the Golden Era of humanity.

• To study the extremophiles life forms of Archean structure with СО and SO2 based metabolism in the Venus’ atmosphere.

• Terramorphing experiments and research of behavior of various genetically modified microorganisms and self-organizing nanoparticles in the Venus atmosphere and on its surface environments.

• Research of the Sun: including solar winds, sunspots, solar flares, brightness, and composition.

After UG formation in 2109, starting from Daedalus-20 mission, the main purposes was extended with:

And starting from Daedalus-22 mission in 2111 the main purposes was expended with:

• The research of Mircea Sanduloviciu plasma-structures on the Sun and their correlation with the Artifacts on Earth.

The DSS is much more bigger than our modern International Space Station (ISS): 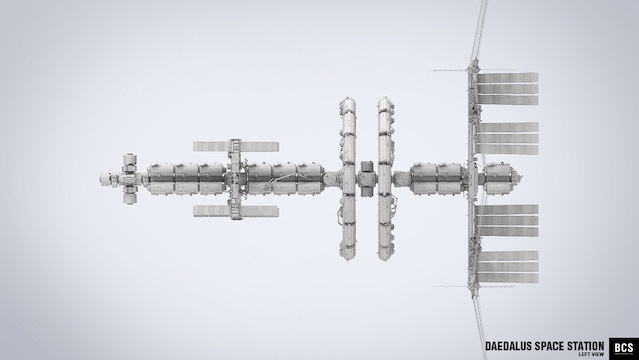 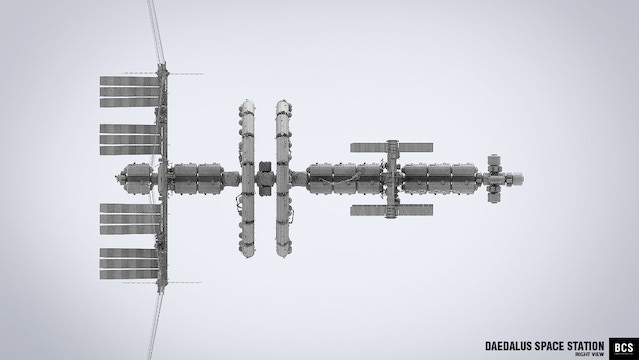 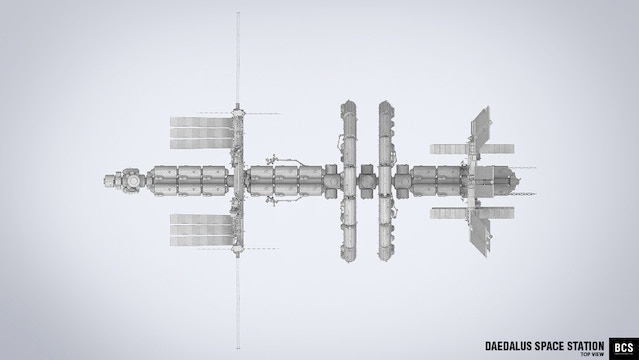 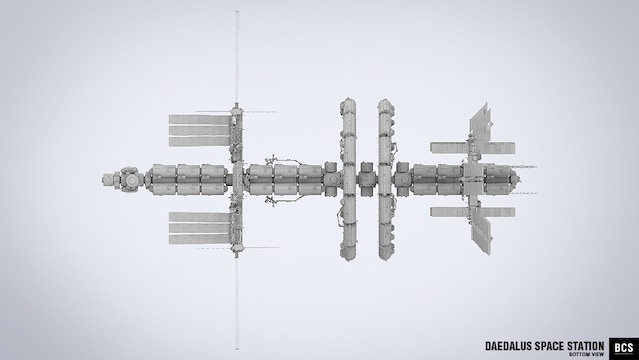 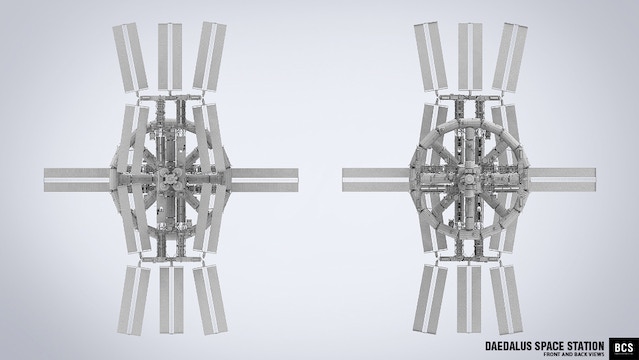 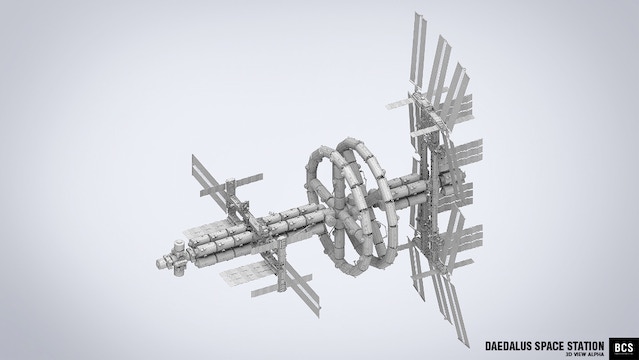 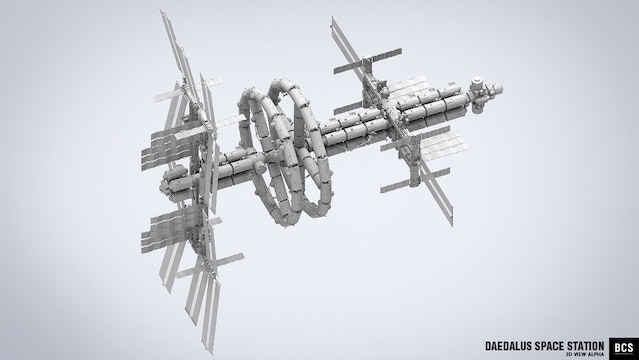 Pressured parts of the station consist of Universal Spacecraft Pressurized Nodes (USPN). Here you can get get more better realizing the size of the station through sizes comparison of USPN: 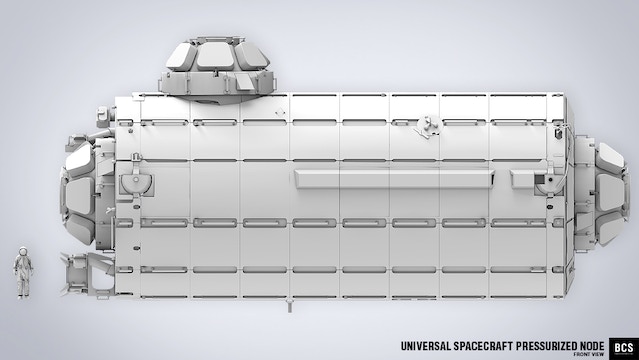 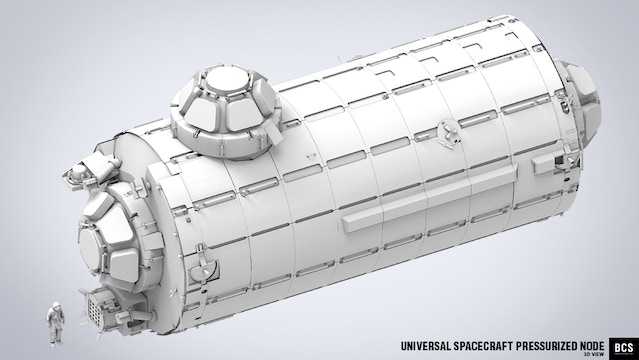 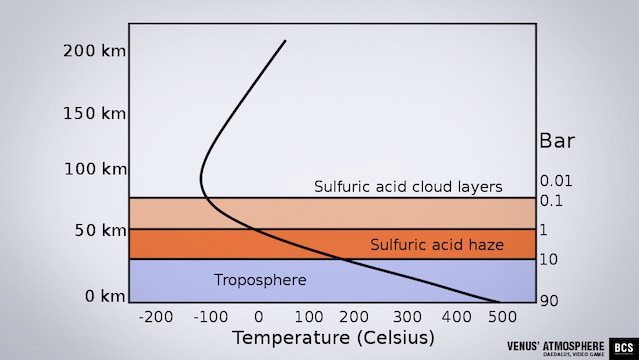 I hope you like that space station concept. Most of its architecture I've made not from point of view of a designer but as the engineer. There draft began from the purpose of the station, resources of the humanity, strengths/weaknesses/opportunities/threats of the mission, PEST factors in the world of After Reset setting by 2089-2111.

One of the major challenges were: microgravity issue, radiation issue, heat extraction, environmental control and life support system. I will write about them in further updates. Once again, much obliged to guys from NASA's reddit who helped me to sort all those things out, gave me relevant links for study and corrected my calculation.

And you, guys, who are rooting the project right now, thanks for your support! And stay tuned for more hard sci-fi and space science content coming :)

Looks awesome! Just thought I would drop my two cents in that you may have gone overboard on the solar arrays :) Depending on the station's ability to stabilise itself and its orientation in orbit you will end up blocking a large amount of them which will cause them not to work.

I would personally go for larger (longer) solar wings than more of the ISS-sized panels.

Thanks, badrobit. I am glad you've paid attention to such detail. I've received PM on Kickstarter from our fan and backer Sebastian who's an Aerospace Engineer. He pointed on that possible issue as well. I hope he will become our science consultant (aerospace engineering) for the project.

Yet do we still discuss it. The case is (why I put those solar panels right that way):

• The solar batteries are not the only power source for the station. There is a nuclear poser source as well. Though, I still study proper solution based on SAFE (Safe Affordable Fission) and Small Reactor for Deep Space Exploration (both by Los Alamos National Laboratory) with the Trickling Cooler-Radiators. Russians develop them for their Nuclear Space Engine program: Popsci.com

Those Trickling Cooler-Radiators should be ready by 2020. Here’s the patent info: Russianpatents.com

• DSS maneuvering and solar panels position. Despite each c-Ring can keep rotation separately, in normal mode they do that in “coax rotors" mode: En.wikipedia.org

So in regular mode the station is like whirligig with a still shaft. The “bottom” is always facing Venus, while the “top” – to space. Each of the engine (solar based or nuclear based) can maintain the station’s operation alone.

Here is the discussion about it I launched several months ago on NASA’s reddit: Reddit.com

Though, it is just my current studies and the issue we discuss. So, please, if you have any relevant ideas or proposals (or maybe refs), don't hesitate to share, mate.