Welcome to a small dev diary post about the quest and dialogue design in The Black Grimoire: Cursebreaker

Posted by TheBlackGrimoire on Dec 7th, 2020 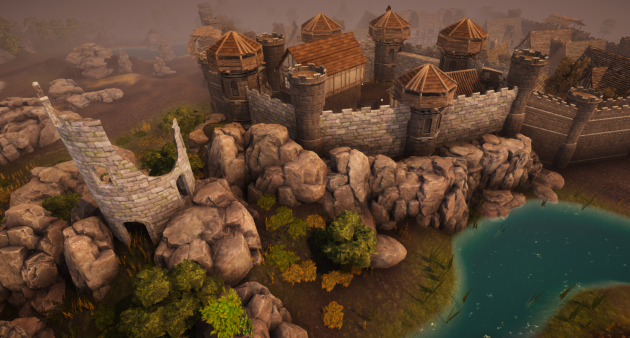 Hello and welcome to a small dev diary post about the quest and dialogue design in The Black Grimoire: Cursebreaker. Our game is designed to be an open-world solo RPG adventure; as such it will contain a single main story quest line, which is accompanied with a multitude of smaller side quests and tasks. The side quests tend to have distinct steps or phases to them, which involve navigating through dialogue, while tasks are simple objectives the player may encounter while out in the world. For example, these tasks may require killing a monster that is nearby, escorting an NPC to safety, or perhaps destroying a barrier or performing another action that involves a skill check. If the player’s path is blocked by woods and shrubbery, passing through may require a certain level of skill in woodcutting for instance.

Investigating the disappearance of a local herbalist in Thornhill

The main quest in the Black Grimoire has you play through the story of Lord Rothar Aercrest, a former ruler to the Lordship of Imberthale (names of characters and places may or may not still change). As the game starts, Lord Rothar has in fact been dead for some time and his spirit dwells in the afterlife known as the Dream, where the dead dream of moments that took place during their lives. However, Rothar’s dream is soon to be rudely interrupted, as an evil wizard known only as Gabrius uses necromancy to raise him from the dead. Rothar becomes bound by magic to serve Gabrius as his blackguard. But while Rothar is forced to roam the world carrying out Gabrius’ petty will, he may yet run into an opportunity to break free from the wizard’s command. Ultimately, however, there is only one way to end Rothar’s curse of undeath – Gabrius must die. This may prove to be more difficult than expected due to a mysterious black grimoire the dark wizard carries with him.

Started and completed quests can be found in the quest list 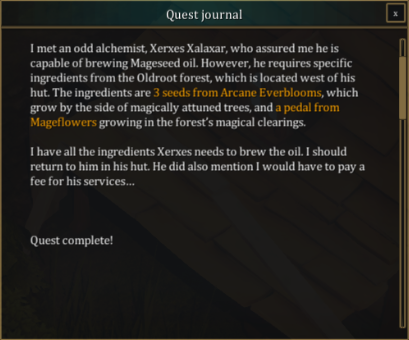 Full quest details can be found in the Quest Journal

The main story quests involve plenty of dialogue, which we’re designing to have the shortest path to skip to the end, while also having optional branches that may offer additional information about the quest or lore in general. We’re also adding small in-game cinematics to certain points as the story progresses. Of course, sometimes the dialogue options can be consequential too; it may be possible to haggle on prices, conflicts may be resolved either peacefully or through violence, and so on.

Full NPC dialogue and player responses recorded in the chatbox

Although the story itself is linear in the sense that there aren’t many different ways it can play out, we are looking for smaller ways to weave meaningful player choices into the quests. One such example is a quest reward changing based on the choices the player made during the quest. If the player takes the “evil” option they might be rewarded with an aggressive weapon, while the “kind” choice may award the player an item with certain utility, etc. Additionally, some choices may lead to rewards while others do not. And perhaps poor choices are met with punishments, such as debuffs that require dispelling.

Naturally we are sharing screenshots of our work and can’t wait to share more of our progress in the future. We wish happy Christmas times to everyone and hope you stay away from viral infections!