Details on what is coming in Daring Adventures build 0.06. Also, we are starting to think about some crowdfunding support - your input is appreciated.

Our current work on version 0.06

We are hard at work on build 0.06 of Daring Adventures. The newest addition to the game will feature an upgraded deck selection screen. The heroes will still be selected in the same fashion, since you can only own one of each hero. However, you will be able to acquire an infinite number of elemental attacks and treasure cards. As such, building your deck to suit your heroes and play style will be essential to progress.

Currently, the deck in build 0.05 (http://www.stencyl.com/game/play/30733) starts you with 1 of each element and 4 each of air, wood, magic and holy elements. It was set up that way so you can practice using the elemental modifiers - as described in the previous news release. The treasure cards have not been implemented, yet. In the finished game, you will begin with 10 basic attacks in your deck. After each battle, you will be rewarded with 1-3 bonus cards. These bonus cards will consist of either elemental attack cards (common), treasure cards (uncommon equipment and items), boosted elemental attack cards (rare), or even new heroes (extremely rare). Before going into battle, you will want to insert your new cards - or not if you do not like them - into your deck. You will do this at the deck selection screen: 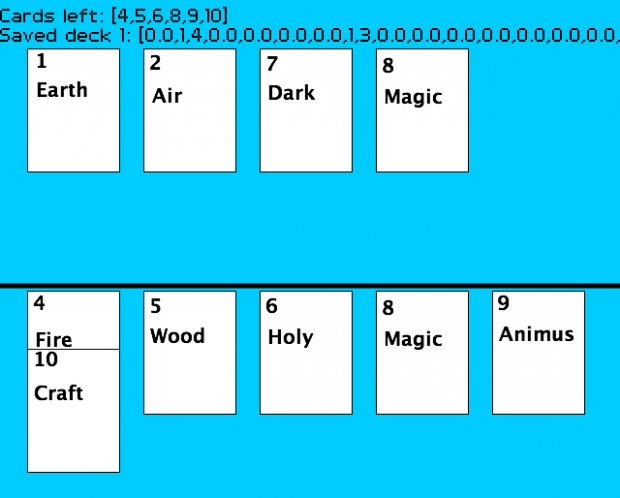 This is a screenshot of the deck selection in its early stages.

Here are some things to note In the mockup selection screen (above). We took out the water card to make sure that the cards were spawning correctly on the screen. We only own one copy of earth and dark - selecting them made them disappear from below and appear only in the built deck above. We own four copies of air. Selecting all four made it disappear as a choice below and appear only above. We also own four copies of magic. Selecting three of it makes it appear in the selected deck above, but still remain as an option below.

What this means is that you will have to carefully select your deck. We are considering giving you five saved deck slots. If you own four air cards and put all four into one of your saved decks, you will have zero air cards for the rest of the saved slots. Just like in a paper CCG, you cannot have the same card in two decks unless you take apart the first deck.

Lastly, we are considering crowdfunding the project. Right now we can only work on it in our spare time and things are moving rather slowly. If we could get crowdfunded for a couple thousands dollars, we would be able to dedicate a lot more time to the project. Here are a few possible reach goals and perks. If you have any suggestions, we would love to hear your feedback!

Reach goals:
1. Create extra expansion packs before release - right now we have two areas with 10-20 locations containing different monsters, challenges, treasures, chaos beast boss fights, and unlockable heroes.
2. Create a paper card version of the game. The paper version has already been developed, just not produced. Instead of having a party of heroes starting out, it would play more like Munchkin with a D&D combat style. We just have to figure out where/how to get printed paper cards.
3. Have online multiplayer. Currently, Stencyl does not have multiplayer implemented. If this reach goal was met, we would move to the Unreal engine for development. That would also open up possible ports to Xbox and Playstation.

Perks:
1. Designing a hero - this could be one released to the public or unique to you.
2. Designing a chaos beast
3. Designing an area - this includes locations, challenges, treasures, monsters and chaos beasts. Basically, you could work with us on designing an entire expansion pack.