Today in our first feature we look at the first official Add-On Release for Armada 3 1.1/1.2 and go into a little detail about what we can expect from this Sub mod. 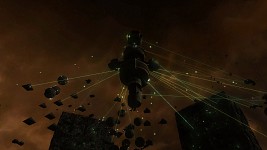 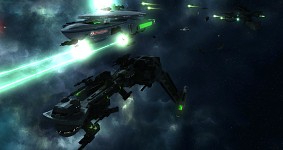 Allow me to re-introduce Draconis our first mod contributor and fellow member of the Armada 3 Dev Team, Releasing Realistic Borg an insight into how he feels a more realistic Borg should play out as a playable faction, we ask him a few questions around this latest Add-On.

Hi Draconis, Why a new Add-On for the Borg faction?
Basically we felt that some people would find the Borg more interesting if they got to play the Borg as they were in the show minus the endgame episode of course! I really felt that the fans wanted this kind of Borg but it just really would make multi player no fun for those on the receiving end, well unless you like that sort of punishment!

So what have you changed from the original CTA faction?

I basically have spent a lot of time rebalancing their research tree, for example they will now through research be faster, stronger, more ships, more capitals, discounts etc, more bonuses for research it basically emulates a collective response so similar to the bonuses that the AI gets, Though to make it fair i removed the AI bonuses for this sub mod so you don't get a 2x more powerful Borg AI ... that would be bad!

Will you be planning any other Add Ons?

I dont know but i never say never between working on Axanar and this but i suppose if the supporters of this mod have the desire for something i may take a go at trying to fulfill that where i can.

How will these upcoming add-ons effect the online multiplayer aspect?

If you and a friend have the addon you will be fine. Your unlikely to find a public game with an addon. But it is easily turned off/on via the Enabledmod.txt

Got it. Thank you.

Any estimate as to when this will be released? It already sounds pretty awesome.

its on our add-ons page right now :)

Did not notice that! Thank you :)

Why it ends in 2x more stronger, why not 10x? I still have lot of hair I can pull out

Question: Does this add-on give more Borg ships the ability to assimilate?

One thing I found a little strange is that right now if you want to assimilate a bunch of enemy ships you're probably best off playing Cardassians. The Janissary is a very effective capture ship available from the get-go, and when levelled up have two in your fleet can lead to a lot of captures.

The Borg are kind of missing this right now. In the mid-late game they get Assimilators and Assimilation Cubes, but don't seem as good at it as the Janissary.

I actually modded the Borg myself back in 1.0 - giving assimilation ability to all Borg ships and reducing their weapon damage. The results were... interesting. Half the Borg fleets comprised of neutral and pirate cruisers.

Can you share how you added the assimilation ability to all Borg ships? That sounds pretty cool.

when will this addon be released?
when i played the borg felt underpowered, and i am pretty good at the game.
so this will change the players experience when playing the borg?
in a sense that the borg gets stronger

already released on the addons section :)

ow, i didn't see that section :P
btw great mod and quite a performance that you guy
do this in your own time apart from work (and such)

thanks for your support :)

What did you change, i was looking around the mod and cannot see any difference vs vanilla.

Almost all research files got changed. Make sure you apply it correctly.

i'm not sure if something is wrong with my browser, but i cant find this add on section anywhere. that menu bar that should show things like news, screenshots, vids, downloads, i don't see it anymore.

not even on IE, that i DON'T have loaded with a dozen blockers and privacy aids lol

ah, found it, had to reload the page a few times until this stupid banner stopped perfectly covering it

Did you know, all the sections (therunder "Addons") are hidden behind an add, if you do not log in, with and without adblock...

Perhaps a bigger header-picture will place it somewhere below? xD

not much we can do about moddbs add policy :P

most unfortunate, but ok, as soon as you know it, you simply register / log in

Cheers for the great mod, keep it going!

Please don't take this as being critical of your work, I just want to throw this in as an additional idea. This addon looks awesome, I'm going to try it tomorrow.

If you were to make the Borg closer to the show/movie, wouldn't the goal to be to lessen the amount of ships? Apart from the craziness that happens in Voyager, I don't think we ever see more than a single Borg ship at a time.

My suggestion would be to have just a small amount of Borg ships with slightly above average quality. You would have a Borg scout ship for recon, the Sphere for a colony/capital, and the Assimilator for attacking and assimilating frigates and cruisers. Maybe a couple more ships like a repair ship to round out the roster, but I believe that should be pretty much IT as far as Borg ships go. Early game the Borg should focus on expansion with assimilated ships.

The Borg should have to rely on assimilated ships supported by the few ships they build for the bulk of their early expansion fleet. We've seen that the Borg never attack powerful foes with assimilated fleets, so the assimilated fleets would be used as early game expansion as well as flexibility later in the game.

The assimilated planetary defense forces alone aren't enough to win obviously. The main objective for the Borg is to build the titan - the Borg Cube, the most powerful Borg ship, the ship the Borg use to attack and subdue their prey.

The Cube should be easier to build than the other races titans since it's the only real assault ship the Borg have, they have to rely on it to destroy the enemy. It should start out relatively powerful, able to handle a small fleet, but at level 10 be ridiculously hard to destroy (Wolf 359) with the ability to assimilate capital ships. The thing is with the Borg, the longer you leave them alone, the more powerful they will become.

I think this is the best way to remain true to the Borg we've seen while giving them a very unique playstyle. Anyway, just my two cents.

It has been discussed before, I myself being a proponent of the kind of Borg that you set forth here. Even in my original review of the mod, I stated that I felt that Borg fleets were far too large. We did reduce them somewhat in later patches, but I would ultimately like to see a very limited number of larger vessels in a Borg fleet. Early game would consist mostly of interceptors, probes, and dodecas, while later game would include a limited number of spheres, pyramids, and others large vessels. Cubes, Diamonds, and other caps would be extremely expensive with high logistics cost, limiting them to maybe at most 4 in a large game. The Progenitor would still be godlike, but would be prohibitively expensive for all but the largest of Collectives.

Don't fret, there may be an add-on in the future addressing this.

Any chance of seeing an addon with the Cube as the titan, so we can relive epic massacres such as Wolf 359?

I'd have to probably say no to that one. Cubes are already powerful enough to take on 40+ starships, so I don't see how making them titans really changes much.