The biggest release of CRYENGINE in a year is out, with 3.8.1 adding OpenGL, Linux and Oculus Rift support

With other leading engines Unity and Unreal announcing VR, OpenGL and cross-platform support a while ago, CryENGINE is now keeping up with the pack with a big release of their own. Starting today, all subscribers to the engine have immediate access to these new features, which was covered in an official blog post.

Going hand in hand, a fully-featured OpenGL rendering implementation was added so Linux games can now be created in the engine (note. that you will still need Windows to use the Sandbox Editor).

Seems everyone is jumping on VR today (including us), and with Crytek announcing a VR title “Robinson: The Journey” at E3, Oculus Rift support is finally here. To help everyone get started they have included a small demonstration level, aptly titled the "VR_Demo". It showcases some information on how you can approach setting up your levels for VR, some of the implications and the immersive benefits of using VR. 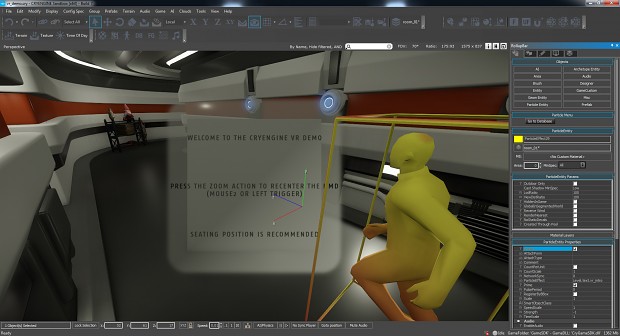 There were plenty more changes which helps Crytek maintain it's rep as the most gorgeous reputation as prettiest engine, including: Voxel-based Volumetric Fog, POM Self-Shadowing, 8-weight GPU Vertex Skinning. What does our community think? Excited about all the VR stuff lately?

Exited about VR? While VR has been the "new big thing" for the past two years it's still far too early to tell for most people. Last time I walked into the store, I didn't see any VR headsets on the shelves.

The idea is interesting enough but the only thing that really excites me is that maybe when I'm an old man I will enjoy the company of countless topless supermodels while lying on my deathbed in a personal holodeck.

I've tried a lot of the headsets and none are consumer ready yet. HOWEVER it appears that due to the insane competition whether they are ready or not all of them will be released by this time next year.

I believe it is going to be a lot more than just another "3D TV" type fad, but there is still a lot of ground to cover

The last time it had been also the big fart... and went vapour. Besides insurance companies won't be so happy with people constantly bumping into things while seeing nothing.

Thats cool :3 but i work with Unreal :o

Oh yes, OpenGL and Linux = unbelievable, or at least unexpected!
One of the best updates so far.