This week Ian talks about the implementation of weapon types, the Lich, and ranged weapons.

Hey everyone, Ian here. We've had a productive several weeks! This round of updates has done a good job of polishing some of the visuals which I think players are always happy to see. I think a little effort to make your game look cooler on its surface level can go a long way in getting people interested in your game! 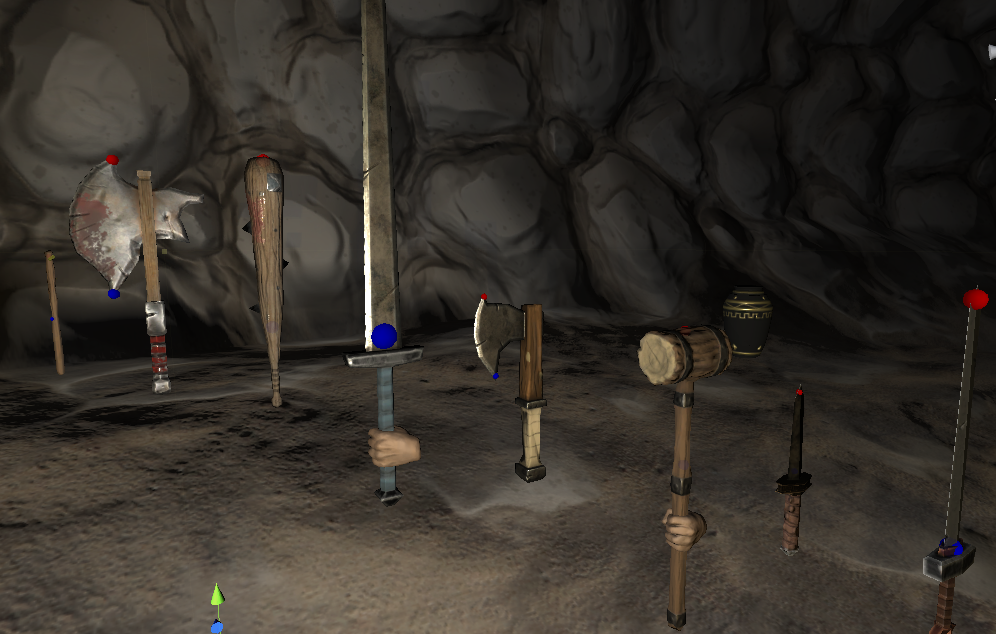 Weapon graphics! Finding new weapons in the game is now a little more meaningful. When you equip a weapon it will change the model and animation set for the first person rig. There is also an ability that comes with each weapon type that is bound to the right mouse button. We've yet to create all these different abilities in game, but we've got some good ideas for them. This also changes the weapon skill, and multiple weapon types can belong to a certain skill. A short sword (1 handed) and a great sword (2 handed) will both use the slashing skill. Skilling up will be a important decision for players as they don't know exactly what they will find in the dungeon and must decide whether when to stick with a weapon they have higher skills for vs. a weapon that does more damage that they aren't experienced with. Enemies do not spawn infinitely, so there is a limit to the amount of learning you can do across the different weapon skills by the time you reach the endgame. Weapons of course can also have stat bonuses and different attack speeds, damage, range, and animations which will affect their usefulness and it will be up to the player which weapon type syncs the best with their or their character's play style.

Getting a ranged weapon in for testing and balancing was a priority, and because I've decided the next class will be more of a magic user we settled on adding wands first. To avoid the circle strafe/endless kiting of just a straight first person shooter Ben setup the wand so that the player's movement is greatly slowed during the attack animation. I've noticed that many 3rd person games do this (Diablo, Dark Souls, MMOs) Either stopping the player's movement, or requiring the player to stop moving before performing certain actions, but it's less common in first person games, so this will probably require more testing. I also added this movement speed reduction for melee attacks, and as I stated in the video it makes the combat a little slower and more interesting, and less samey. This might be something we leave in and balance the game around, as some commenters have mentioned the "samey-ness" of the run-in-hit-run-out gameplay we had going on.

We've also made some big strides in the graphic user interface of the game. We moved the health bar and other information to the bottom center-ish of the screen. This seems to be a trend among first person PC games, and I am finding it a little more comfortable having all the important information in one place. The actual GUI art itself is a work in progress, it's an interesting task creating UI art as there is a constant struggle between aesthetic and functionality. As a game designer first, readability and functionality is my primary concern, but I think a nice looking interface can have a huge influence on the people playing or looking to buy the game. There's a lot more iterating to do, but this is certainly a start, and much better than debug text.

For the Beta the last two really big areas of the game to add to are class things (passive upgrades for leveling, additional classes) and Enemy tuning/variety. So here's a new enemy! The Lich is skeletal sorcerer that shoots dark magical bolts and is completely immune to damage. That is unless you destroy his phylactery, in this case an urn: 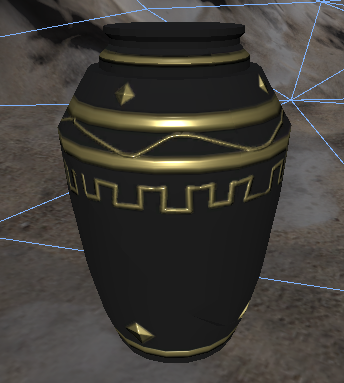 When rooms are generated a Lich and its urn will spawn at random locations. The player must deal with the Lich and other enemies while they search for its phylactery and destroy it so the Lich is rendered mortal. I have a glow map on the urn making it glow purple at the moment, but this can be turned on/off or somewhere in between to make it a little harder to find the urn, affecting difficulty.

That's about it for this update. Thanks for reading, and as always, let us know if you have any comments, critiques, or suggestions.

I think you should make the 'flame' texture of the lich purple like the urn. Maybe help with the association a bit more. Maybe also his fire attacks, but it would help make it look related.

Yeah, I'm going to change his projectile to some kind of dark purply magic type bolt that acts differently than the fire mage's bolt. Might give him some more equipment than the other mage as well, maybe a bone staff or something cool!