This is the first in a series of articles documenting the entire journey of the creation of the game "Kanchey" for iPads. This article focuses on the the initial idea of Kanchey - how the idea was fleshed out and given a final form.

Kanchey is a marble game that was released on October 15th, 2014. In this series of posts, I will try to document some of the things that were encountered in the creation of the game, as well as how the game reached its final form. Let us start with creating Kanchey. 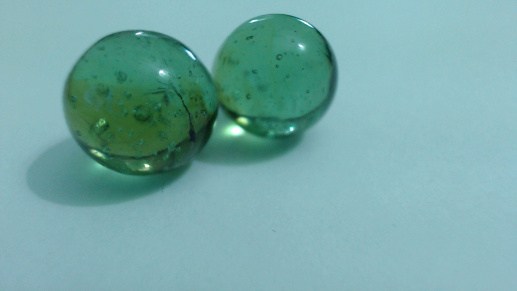 Kanchey - or as they are called in English, Marbles

Initially, I wanted to make a game that would have the following properties –

After a while. I realised that there was already a game that I wanted to play but I didn’t recall seeing being made. And thus was conceived the idea for Kanchey.

Kanchey (or Marbles, as they are called in English) is a street game played in South Asia. It has challenging mechanics, as well as depth that can be simplified or expanded upon depending on the scope of the game. The street game consists of shooting marbles into holes with a player's own striker marble (a little bit like snooker, but on the floor). Additional mechanics, such as players would put their marble collection as entry fees for competing were also considered to raise the stakes and make it more exciting.

Kanchey did not require complex shapes – after all, it was a game about rolling balls into holes dug into the ground. But like every good idea – it was a simple concept that could be fun to play if executed properly. This also allowed me to cover for my lacking art skills.

The game was planned as a series of layers. The prototype would involve an inner core that had the basic mechanics of swiping the striker, rolling, falling etc. and the rest of the game would be built in layers on top of that. This had some of the following advantages -

Core of the game -

The initial plan was to have a basic prototype. This would have -

The objective was to use the striker to get the non striker marbles into the holes without getting the striker to fall. Upon successful completion of the task, the player would progress to the next level.

Middle layer of the game -

This part would include local multiplayer. This would involve alternating turns between two striker marbles, as well as score maintenance. Since the inner core would already have been implemented, this would involve having two players with customizable appearances. The customizability of the striker Kancha allowed an avatar of sorts - you could chose the colour and pattern for your striker to give it some personality. This layer would use whatever has already been built, and make additions as required.

The final and most challenging layer would be online multiplayer. This would take the game built in the previous layer, and add online component to it. However, it would also have to account for matchmaking, issues with connectivity etc. which would come with an online game. This was the outermost layer as it involved many challenges, and required all the components made previously to work in unison to be functional.

Some final polish, such as level selector, striker designer (used for maintaining customized Kanchey), saving player data etc. would require to be implemented before the game shipped, irrespective of which layer was completed.

In subsequent posts, I will go into further details into how the concept of the final game was fleshed out - how some ideas were rejected, and how other things which were not initially a part of the design were found and added – and how things were implemented.