Creating the illusion of depth is one of the best things you can do to improve 2D levels. See how we did it for Demons with Shotguns.

I’ve been putting off doing any serious level design in Demons with Shotguns for a long time now. There were lots of more important core features and mechanics that needed to be worked on, and I believe level design need to serve the game’s core mechanics, so it was in my best interest to hold off until everything was completed.

I feel that the time has finally come to start tackling level design, which remains to be the last pillar of the game before I can consider it full beta, and we sprint towards the finish line, focusing on polishing and bug fixes. With that, I decided to spruce up the two main prototype/demo levels I’ve been developing with. The one thing about them that’s always bugged me was their lack of depth.Lets look at one of the first cemetery themed levels, oh so creatively called Cemetery01. This is one of the first iterations of it.

Dreadful. But don’t blame me, it was meant for development purposes at the time so it would have been wasteful to put much energy into it. As the game’s development progressed, I started to iterate on it more. This is a more recent iteration. 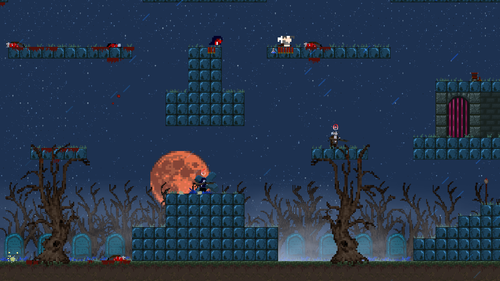 Better, but not great. Firstly, I’m mix-matching pixel sizes, I know. I’m currently working without a pixel artist, using open licensed assets from sites like opengameart.org, so this is going to be inevitable right now. But I digress, we’re talking about creating a sense of depth.

In the screen shot above, we have two large trees in in the foreground; they will hide the player if they step in front of it. And we have a row of smaller trees in the middle layer, in front of the stars background; note the middle and background layer are parallax scrolling.

The size of the trees are also the same. More variation is needed. Also, the background trees are all on the same parallax layer, along with the moon, so they scroll at the same speed, creating the sense that there’s only one background layer. Here’s the latest iteration. 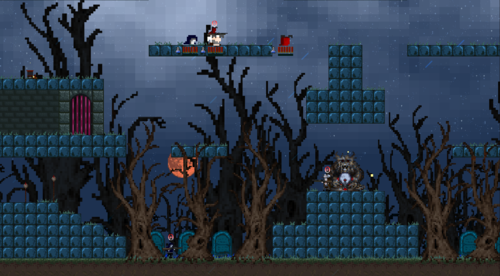 Much better! Trees are shaded appropriately based on how far back they are meant to appear, more variation in size to give greater sense of a looming, dead forest, an additional parallax layer has three total layers scrolling at different speeds, all adding to a greater sense of depth between layers.

All that said, I’ll admit this is far from perfect. Again those pixel size mismatching is killing me! There could be much more environmental pieces than just reusing the same three tree sprites at different scales, and the trees themselves are a bit more detailed than they need to be for background layers. But it’s still an improvement and a pixel artist will help me make this even better; I'm in contact with some potentially interested artists so hopefully I'll have another team member to help out soon!

The game’s backlog is getting smaller and smaller each day. I have a few more game modes to implement (next up is Last Soul Standing) and once I get a pixel artist on board, I’ll be focusing purely on level design. The idea is to have four separate themes (one for each character) with a minimum of 5 levels each. So Demons with Shotguns is looking to ship with 20 levels. My work is cut out for me! Stay tuned as I hope to dev log the entire level design process.