Crawle 0.5.5 has been released! There were 2 main focuses this patch: fixing up multiplayer and improving the tutorial functionality. Work on 0.6.0, a massive content patch, will also be starting soon.

Crawle 0.5.5 has been released! There were 2 main focuses this patch: fixing up multiplayer and improving the tutorial functionality. I'd also like to mention that we will be starting on 0.6.0 soon. 0.6.0 will be a massive content patch and therefore it may take a while to get out, but don't worry, we'll continue to post updates on a regular basis! Make sure to keep up to date with all the development news and blogs here: Sleepystudios.com

Rivers are now generated in place of water. They're a lot rarer so it'll be a bit more difficult to top up your thirst bar now. We've also (finally) added swimming. 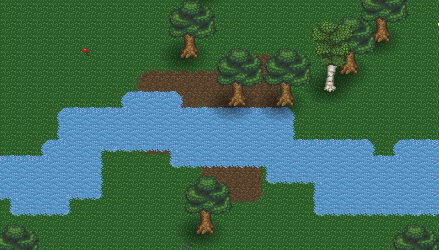 Tutorial worlds and the large tutorials have been merged into a new Tips system. These Tips will appear based on several conditions (however a few basic ones will pop up at the start), you can choose whether or not to enable them with each new world.

Finally, we've made a ton of multiplayer improvements. Hopefully it should be a lot more stabler now and the additional functionality should be useful. As always you can report bugs here.

This update introduces a new updater. After updating go to your Crawle folder and open "Patcher.exe". From then on you can play as normal (from a shortcut or whatever you usually launch Crawle from). The Patcher just needs to be "installed" first for future updates.

The server will also be need to be run as admin!