Finally, the early game crash problem is fixed. And here's a new exciting map for the mod too!

The early game Crash has finally been solved, thanks to HighwayHoss, who fixed the faulty ArtDefines causing it. The Patch is downloadable here on ModDB now. Apply it to not have to worry about those early game crashes anymore.

Also, here's a new map for you. This one was designed by Antaine and depicts the European view of the World during the Middle Ages. I have only applied the Fairy Tale nations to it, to create a really odd and extremely fun map to play! You play as any of the Medieval European Kingdoms as you discover the World how it looked during the Middle Ages - or rather, how they believed it looked. Massive fun is promised! Downloadable on ModDB too! 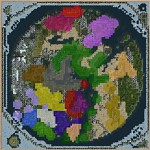