As we did last week, we summarize the tasks we've been carrying out lately in order to finish up Breaking Fast.

Hi! One more week has passed, and we’ve continued our assigned tasks. Let's get started!

Francisco (Programmer): I started a settings manager and I integrated the localization manager (that I had finished the previous week) with it. In order to test this manager, I prototyped a simple settings screen, as you can see in the video below. Now, the game detects at start time whether it’s the first launch, and sets the default settings if that’s the case. Otherwise (if it’s been launched before), it reads a settings file. This is the kind of boring stuff that nobody sees or appreciates, but that it’s necessary!

Oliver (Musician): this week I’ve continued tweaking the mixture of the songs I’d already composed and I’m quite satisfied with the sound. I used Super Mario Kart as a reference for the composition and instrumentation, and Mario Kart 8 as a reference of the sound, which has a classic inspiration and a modern sound. Also, I’m composing the new songs for the last levels. For example, for the Parisian café stage I took the typical French vals-musset as a reference, although I’ve kept the instrumentation of the previous songs of the game to keep it cohesive. I’m still on it… hope you enjoy it!

David (Online programmer): this week I've been focused on two aspects of the online mode, firstly I've been polishing the current flow of searching games and joining them (this also includes friendly invites). Most of the changes are to handle error cases such as games becoming full as you were about to join them and similar errors, nothing too exciting but definitely needed! Secondly I've been handling the case where players disconnect from the online game, either the server or a remote client. So hopefully now the game knows what to do when someone disconnect, specially during level load! (Because otherwise the race would never start, as we need to wait for all the players to load the level to start at the same time!) 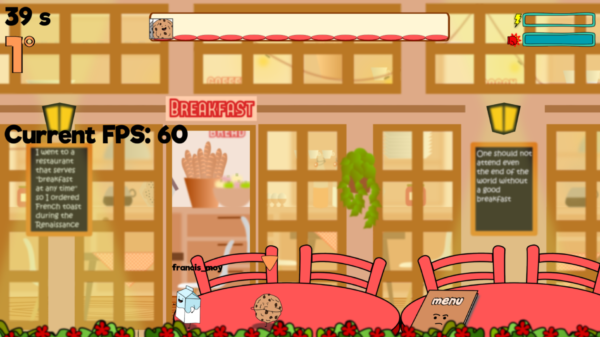