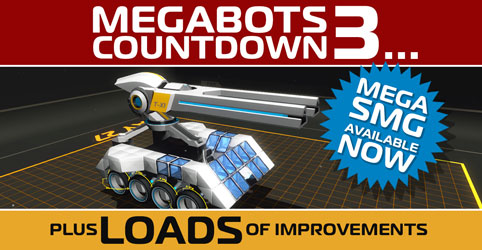 Yes, we are on the countdown to Megabots. On the 3 releases leading up to their launch we are going to allow you to field test the Mega TX-1 components.

First up is the Mega SMG, it is available NOW! and set to shake up T10 forever.

100 MEGA KILLS
The great TX-1 SMG field testing exercise will soon begin!Starting from next week’s update (COUNTDOWN TO MEGABOTS 2…), player kills made with the TX-1 SMG will be tracked on our database. Any player who has scored 100 kills or more with the TX-1 SMG before the megabots full release will earn themselves a special visually different variant of the TX-1 SMG.

Please remember that kills with the TX-1 SMG made this week WILL NOT be counted towards this quota. The one week grace period before the event begins allows recent T10 players to earn the TP and RP needed to purchase the TX-1 SMG and take part.

LOADS and LOADS OF IMPROVEMENTS