Our designer Ville a.k.a. GV shares some thoughts on our core ideas and values on designing an engaging couch co-op.

Posted by VasaraEntertainment on Nov 15th, 2014

Booyah! Got your attention! Now have this wall of text!

Ville here, Lead Designer and Technical Artist extraordinaire, also known as GV in some parts of the internet. As you may have noticed, we already have a couple of posts up explaining WHAT our game is. I'm here to focus on WHY, and through that perhaps also offer a new perspective on what you can expect from Stardust Galaxy Warriors in the future.

One of our primary design guidelines is the concept of 'fun'. Now, you might be saying, "but GV, 'fun' is highly subjective and not a clear design guideline at all" - and you would be absolutely right. However, it can still be a very useful tool in evaluating various mechanics. Whenever we implement a feature, we test it and we iterate until we think it's fun. This might seem an obvious approach, but when you really think about it, there are a lot of things that us gamers take for granted in games that might not actually be all that 'fun' for a lot of people. One of such things is difficulty, as implemented in a lot of modern games. We believe that 'difficulty' doesn't need to mean that it takes a long time to beat a challenge. Furthermore, we also believe that 'difficulty' should never, EVER become frustrating. If you want to be challenged to the point of frustration, to be defeated over and over, pushing forward to improve, gritting your teeth, swearing, punching your table in frustration, just to get that triumphant rush as you finally win after the grind, then there are already games out there that do that much better than our small, independent team could do. We're here to entertain, not to challenge.

One of my personal mottos in regards to this project has been "don't think of it as a game, think of it as a form of entertainment". Obviously we're still very much making a game, but we're trying to find fresh points of view; taking a step back to look at the bigger picture if you will. 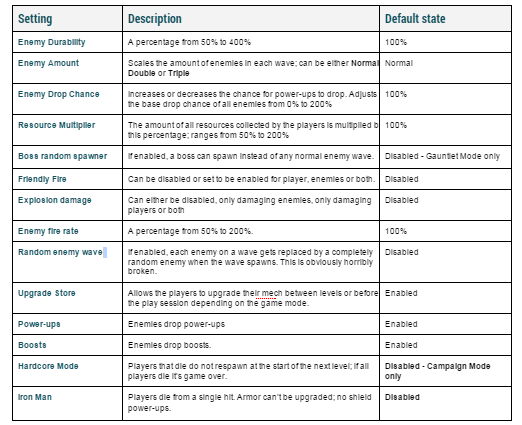 One of the potential scenarios we've had in mind for Stardust Galaxy Warriors is for a family to play it together, they way they would usually watch a movie or possibly play a board game. Another possible scenario is a group of friends, gathering to head out for the night. They have an hour before the bars open; most games and movies will last much longer than that. In our game, we aim to allow any length of a play session, and we aim to allow the players to customize their experience in various ways. You can double or triple the amount of enemies, you can increase or decrease the amount of resources or powerups you get, you can toggle on friendly fire for players or enemies or even both. You can play as an enemy unit. You can double the fire rate of all weapons. A lot of these options can 'break' the game in the sense that it becomes ridiculously difficult or easy. We aim to make the game enjoyable challenging with the default setting we offer, and after that everything is up to the player. In one sense, what we are making here is a type of a sandbox game, where the fun of discovery, the fun of poking at things and seeing what happens is what drives you to play rather than the promise of a reward or the rush of beating a challenge - though we do have a challenge mode with fixed gameplay settings for the more challenge-oriented gamers out there. 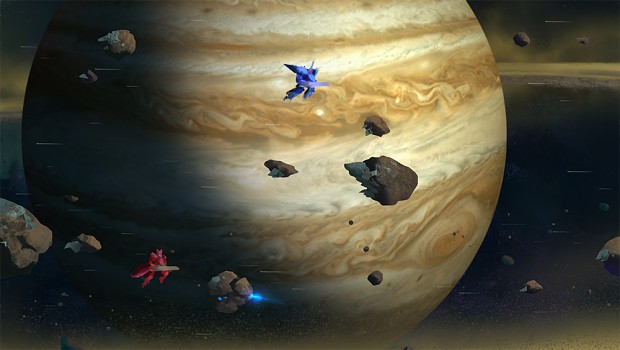 For me personally, some of my favourite gaming memories in my childhood revolve around breaking the games, tweaking them, making them do things they were not supposed to do. For example, there was this Finnish game called 'Liero', a fairly simple split-screen shooter where two players play as earthworms and aim to kill each other, a little bit like real-time version worms. That game had a setting for reload speeds of all weapons, defaulting to 100%.

For the vast majority of the games we played, that setting was at the minimum of 1% or 0% - I can’t remember which it was, but I’m sure you get the point: it was horribly broken and silly.

It was also crazy fun.

We tested through all the different weapons to find which ones were the most broken. We got into fights on screen-peeking, on whether some tactics or weapons were cheap and should be banned. We had FUN, a type of fun that you don't see in many games these days, and while I'm obviously looking at it through the rose-tinted glasses of nostalgia, I still believe that there was something there that you don't easily find in modern games, that magical feeling of turning the game into your own personal playground. That is something we want to recreate, and we want to recreate it in a way where you can not only enjoy it with your friends, but potentially with your parents, with your non-gamer girl- or boyfriends, with your children.

Let's have fun together, shall we?