We talk about what the Foxhole dev team is working on including the Construction Vehicle, Gun Nests, Campaigns and more! 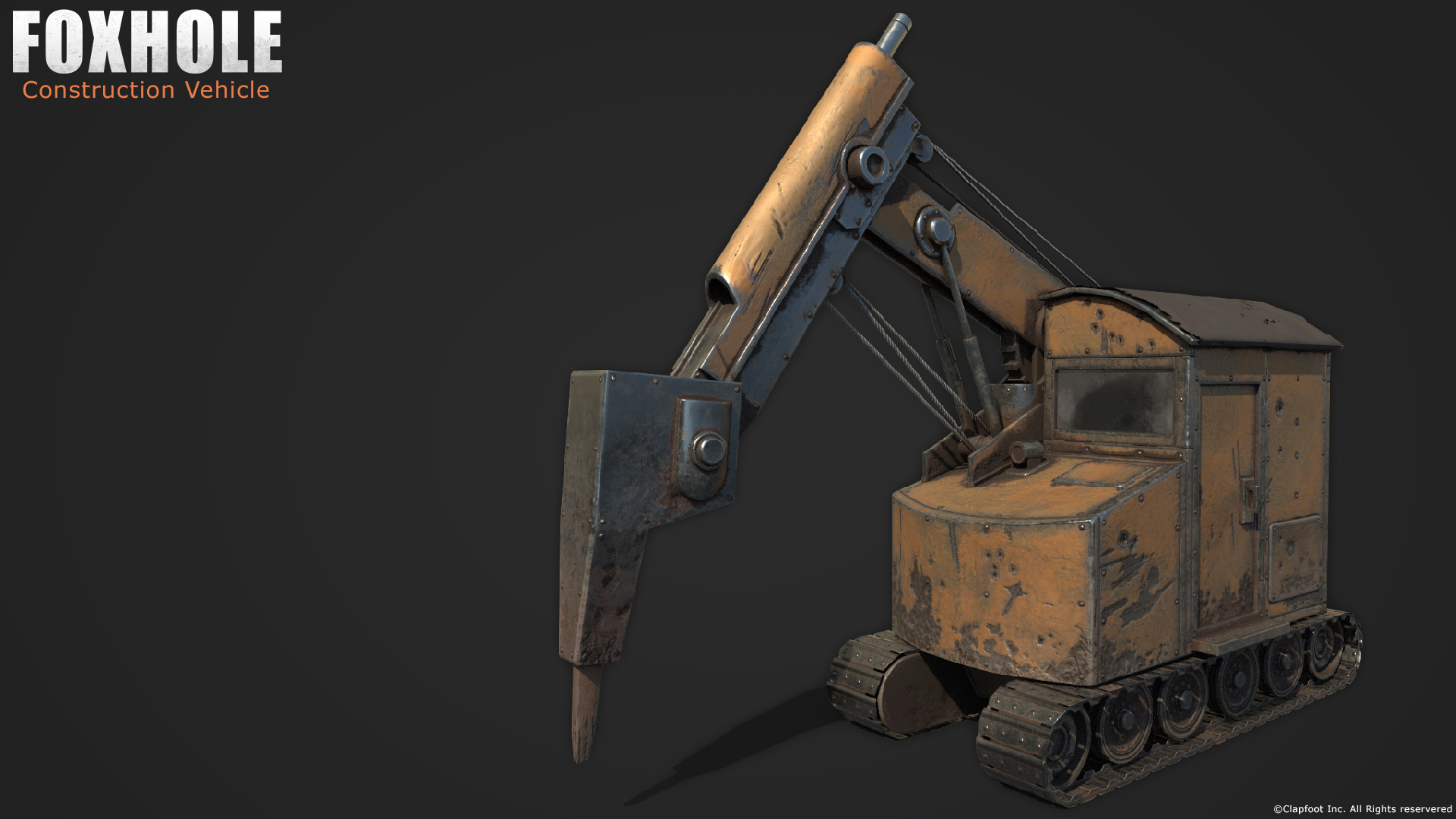 The goal for the Construction Vehicle is to ensure that players fully secure an area (and supply lines leading into the area) before claiming it with a Town Hall or Outpost. Right now, we feel that it's far too easy for a couple of players to sneak behind enemy lines to claim territory. This vehicle will be slow moving, easy to disable, but hard to destroy. Players will only be able to safely bring this into an area after all enemy presence has been cleared out. This change is part of the series of big gameplay iterations we've been making over the last few updates. 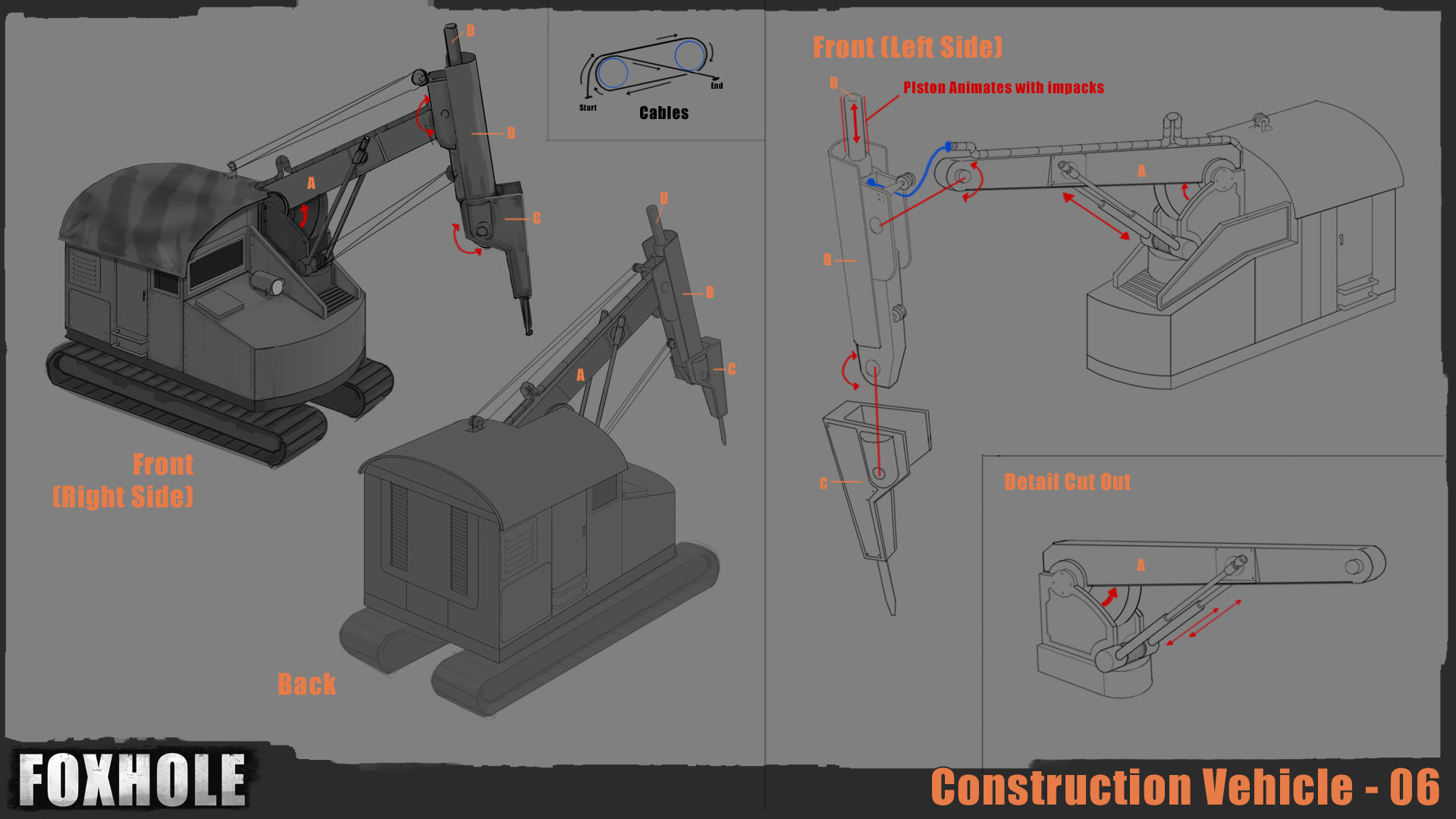 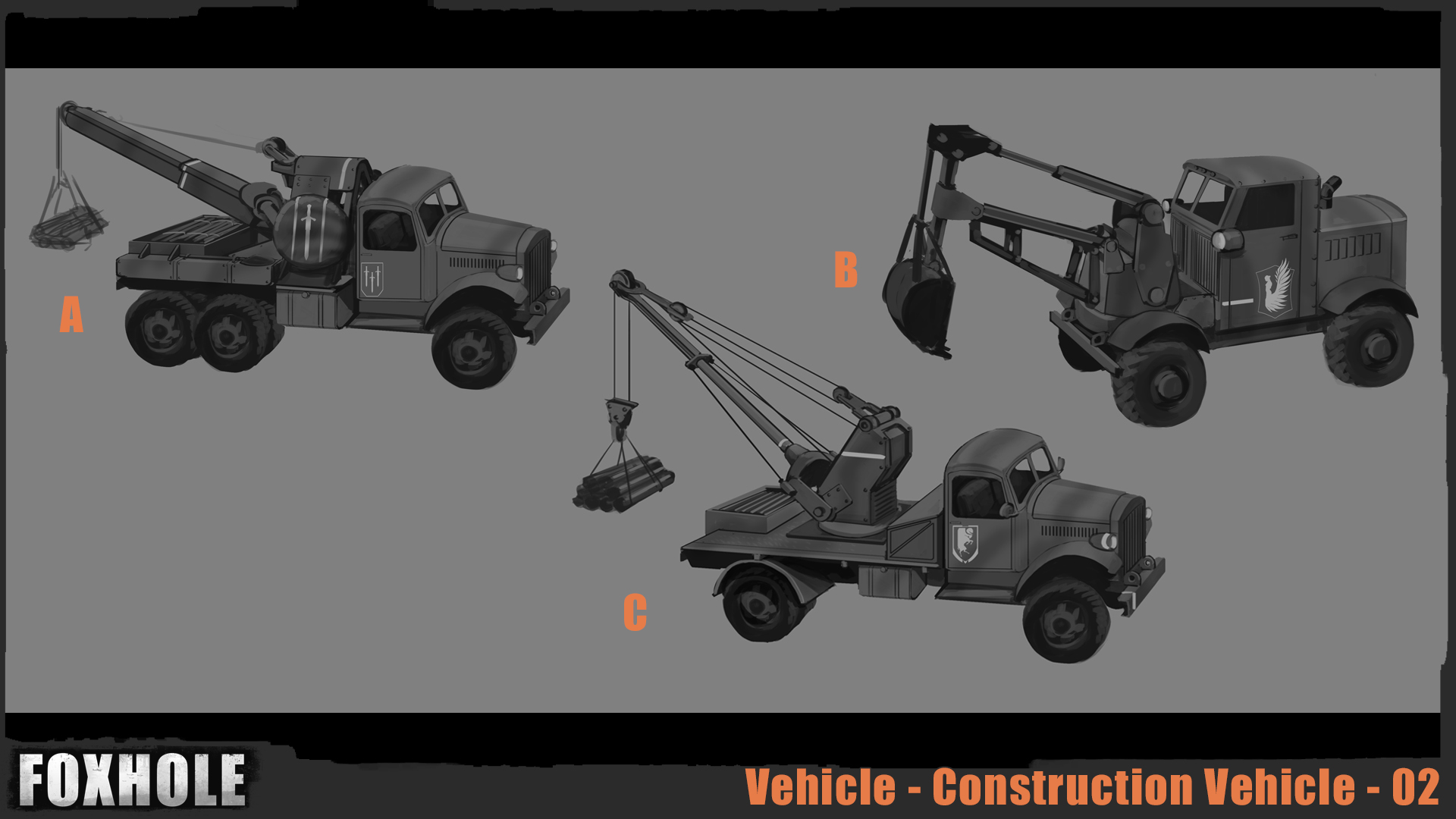 Original concepts for the Construction Vehicle from months ago

This feature has has been sitting in the wings for a long time, but we've held off on including it in our last couple of updates since we've focusing so much already on passive defense structures lately. The Gun Nest isn't technically a new structure, but is an upgrade of the Foxhole.

One of our goals with Gun Nests is to allow players to further fortify an area in the mid to late game without having to add clutter/Foxhole spam to their already crowded bases. We also wanted to extend the structure upgrade system beyond just walls. The Gun Nest will not only have a faster rate of gun fire than the Foxhole, but it will also lob Frag Grenades at enemies. 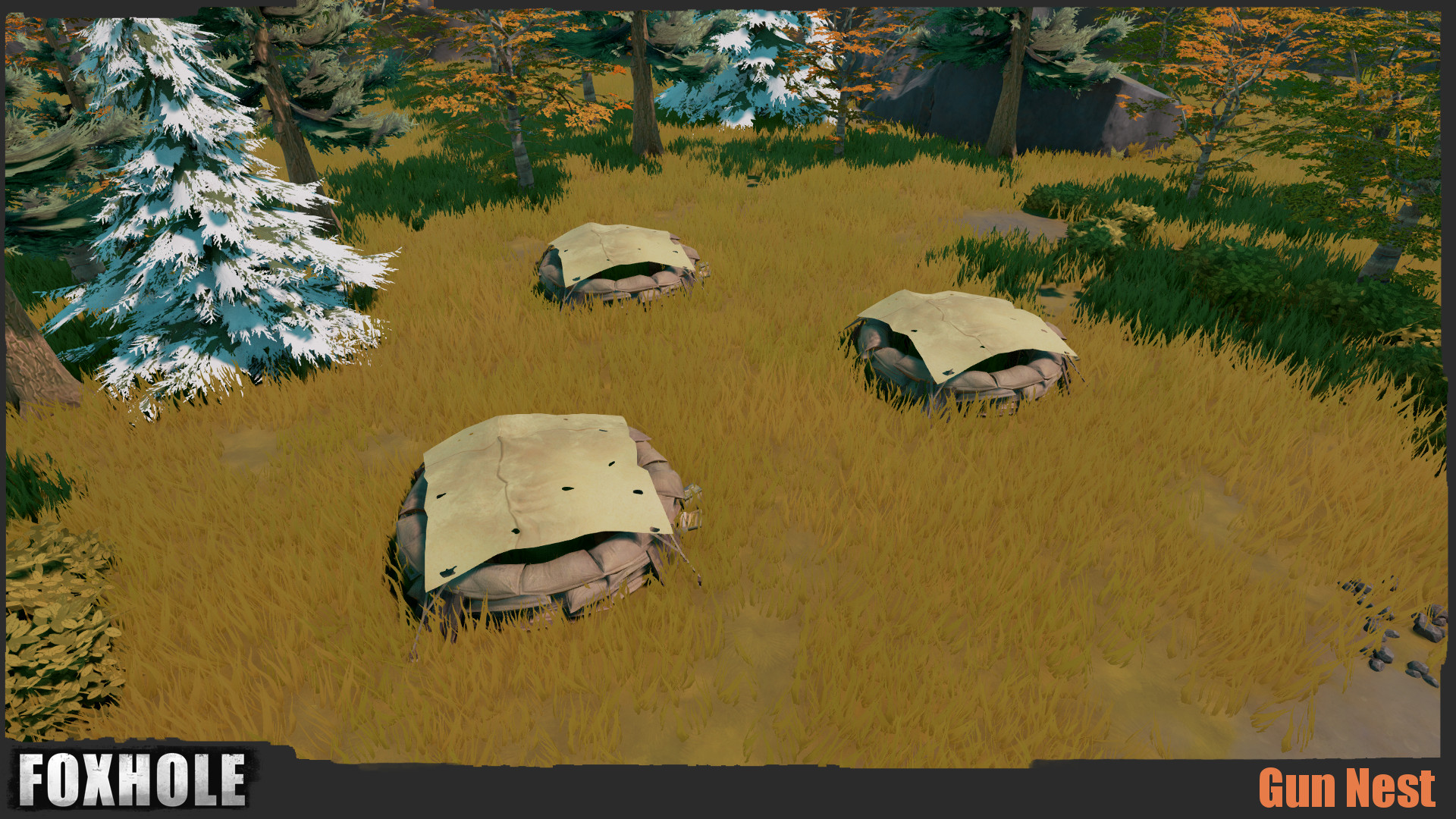 Foxholes can be upgraded into Gun Nests in mid game

We've been through a bit of a roller coaster ride over the last while in terms of figuring out the best format for wars at this stage of development and with our current player population. Campaigns is the next format for wars that we will be exploring and we hope it will solve some of the issues we have with how wars are run today.

Campaigns is not technically a new game mode, but rather a system for scheduling wars that will hopefully bring more meaningful wars to more players. Wardens and Colonials will fight through a series of wars over different regions, with the winner of the Campaign determined by the total number of regions conquered. The Campaign screen will use a world map view that's very similar to the Conquest interface. At the end of each Campaign, a war report will be generated with stats for players to examine. 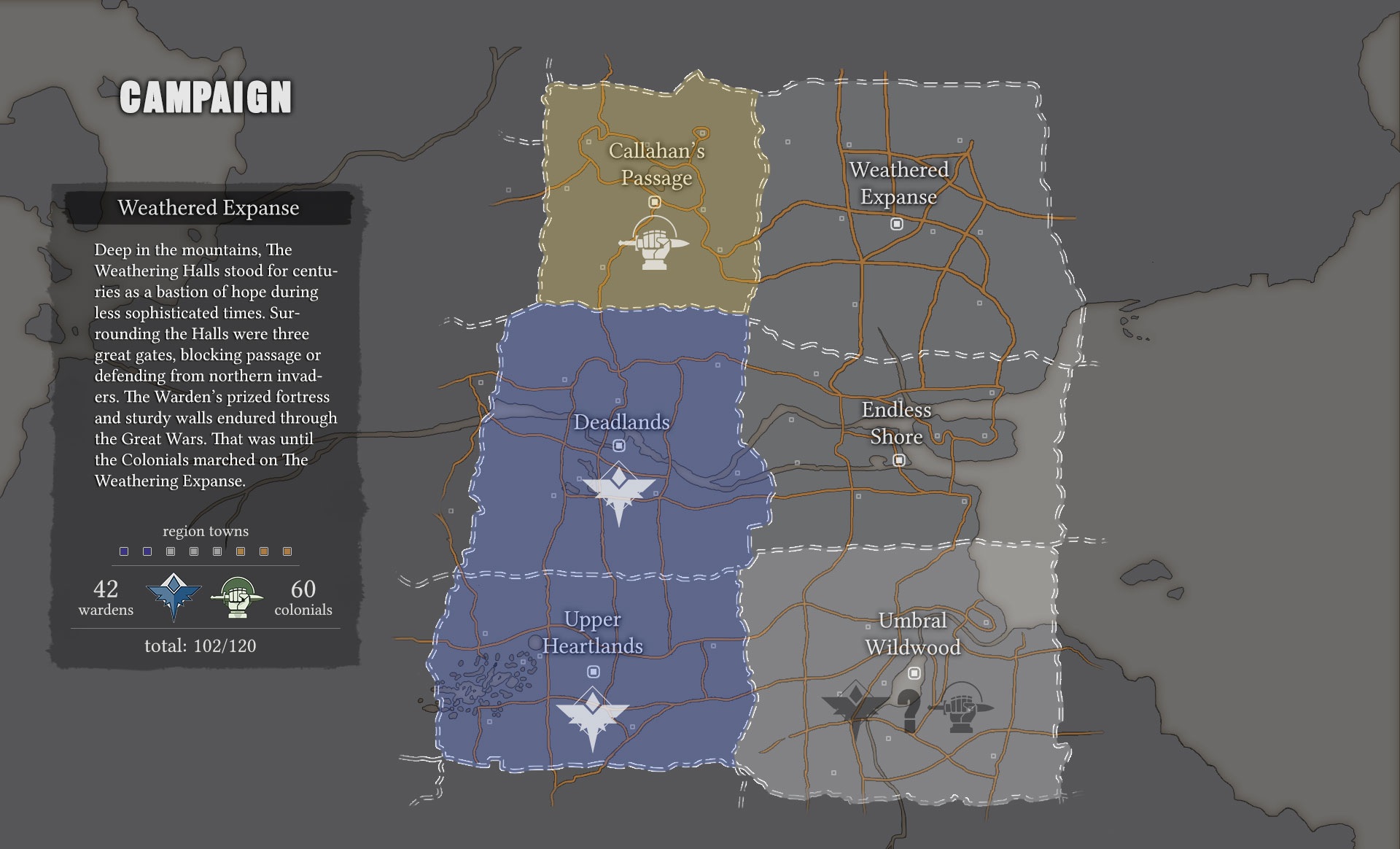 The Campaign screen will be reminiscent of Conquest, but will function differently

With Campaigns, we hope to give more players the opportunity to get invested into battles that feels significant, instead of just endlessly repeating wars. Events will also be merged into Campaigns so a larger part of the community will be able to participate in the same narrative instead of having this somewhat unhealthy dichotomy between event and normal players. I want to stress that Campaigns is not meant as a replacement of World Conquest and it's goal is also not to artificially extend the length of wars. It's main purpose is to organize wars in a way that feel more meaningful for a larger number of players.

If Campaigns in it's initial for is successful, we think there are some interesting twists that can be added such as allowing players to reclaim conquered regions. We don't want to get ahead of ourselves since the feature is still considered highly experimental. Let us know if there are any ideas that excite you.

Here are more big changes that are currently planned...

This is a controversial one, but we feel that it needs to be tested given the problems we have with the current spawn system. I won't go through all the issues, but currently spawning doesn't really make much natural sense, is frustrating for both sides during final stand situations, and the unpredictability in general makes it harder for players to organize themselves. We intend to replace "Spawn in the Wild" with "Spawn at Home Town", where the home town is initially the player's starter town. If the player's home town is overtaken, then another town (likely the one furthest away from the enemy home town) will automatically be designated the new home town. We will be adjusting respawn times to ensure that a force attacking a final town hall has a fair chance.

If one side has no Town Halls remaining, players can build a Resistance Camp at the site of a destroyed Town Hall with scraps that provides the minimal functionality needed for that side to make a comeback. The Camp will let players build Construction Vehicles, spawn, and have access to their Stockpile. It will not supply Tunnel Network connections. We hope this will help alleviate some of the frustrating situations that can arise when one side's last Town Hall has been destroyed, leaving the game in an unplayable state for the losing side if the attacking force does not finish them off quickly.

I really wonder how they're lobbing grenades out of a foxhole that has a flysheet on top.

There's some holes in the sheet. They throw very carefully through them, lol