Or should that be undead? Just a quick response to any claims that the project has been cancelled -- it hasn't.

About a month ago, someone under the name "Maddeiman" posted on our board declaring that the mod was dead. It's a pretty cruel joke to play on people, but it was convincing enough that some people fell for it. Unfortunately, I only found out about this just now, and by then the damage was done.

What can I say? First off, obviously, the project isn't dead. Anyone who knows me, knows that I'm too stubborn or stupid to call it quits. Even if I were to quit the project (which I won't), AT THE VERY LEAST I'd release everything created up to this point -- and that's quite a lot. There's no way I'd leave people hanging dry after all this time. Secondly, I want to point out that I'd never make an announcement that important in the general comments page. All major announcements regarding the status of the mod will be posted AS NEWS. Lastly, I have to admit that this guy has done me a favour, by bluntly reminding me that I need to pay more attention to the people waiting for the mod, and spend a bit more time releasing updates.

Unfortunately, finishing a project of this size and scope requires a lot of focus and discipline, which makes it very difficult for me to find the time to post regular updates, let alone make anything more ambitious like a video. Personally, I can't focus on the project if I'm hanging out on the forums talking about it. Yet if I don't do that, stuff like this happens. :-/ It's a bit of a dilemma for me, and clearly I haven't got the balance quite right yet.

Anyway, this is enough of a kick up the arse that I'm going to give some serious thought on how to update the mod more frequently, without interfering with its development.

Thanks, as always, for your patience, understanding, and continued support. 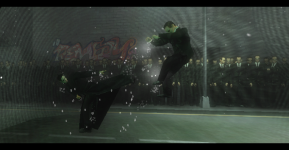 Pretty sad there are some guys who haven't anything other to do than post things like this "maddeiman"...

Well, good luck to you Maddie, we all know how hard it is to bring a project to completion ;)

Yeah, and enthusiasm has this habit to go on holidays when you'd need it for these 20% !

Glad to hear it's not dead. I became a Matrix fan only last year, after all the hype had died, and so I'm really excited for this.

Yeh it's great to hear man!

This is fantastic news buddy, very glad to hear you're still hanging in there. Looking forward to future updates :)

Awesome!! Maddieman i also thought the mod was dead but was not because of that guy, it was because of the lack of news, but i'm glad its still being developed.

Is Kenneth Yeung still working with you?

No, I'm the only one working on this now -- it's been that way for a few years. We still stay in touch though.

Keep an eye on my youtube channel. I don't have time to prepare and edit a proper trailer or anything, but I'm thinking of releasing some short gameplay videos.