Hey everybody! Sorry it's been so long since the last blog post. I'd written a draft for one last week, but decided to scrap it. On to pf that, we were going to have some guest writers come if for the blog a few times before that, but we had some scheduling problems. So. Yeah. This post today will be all about the progress of the Collapsus weekly builds so far! Let's jam!

Hey everybody! Sorry it's been so long since the last blog post. I'd written a draft for one last week, but decided to scrap it. On to pf that, we were going to have some guest writers come if for the blog a few times before that, but we had some scheduling problems. So. Yeah. This post today will be all about the progress of the Collapsus weekly builds so far! Let's jam! 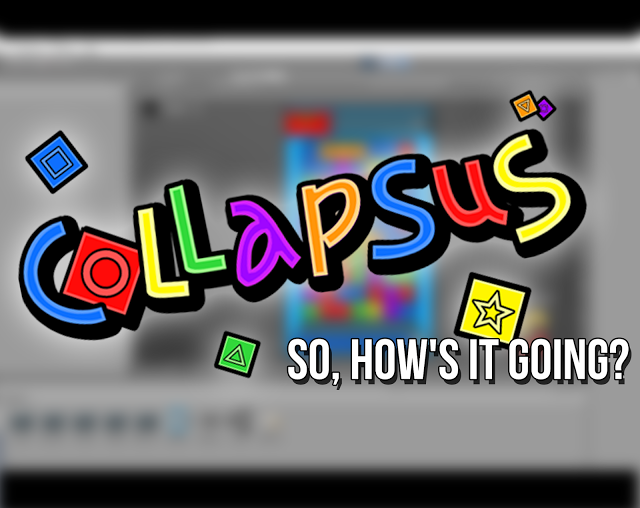 Right now, as of the time of the article, we are 13 weekly builds in and are releasing the 14th probably tonight. I'm going to attempt to ouch on most of what's been getting added and changes since the last build we had for events and the weekly's themselves (especially since we know that far more of you have played at events as opposed to on itch.io)

There have been numerous big fixes (some bugs generated by the new code funnily enough, but that's to be expected), tons of graphical changes, new modes, music (finally), and some mechanical changes. Let's go over those one-by-one, shall we? 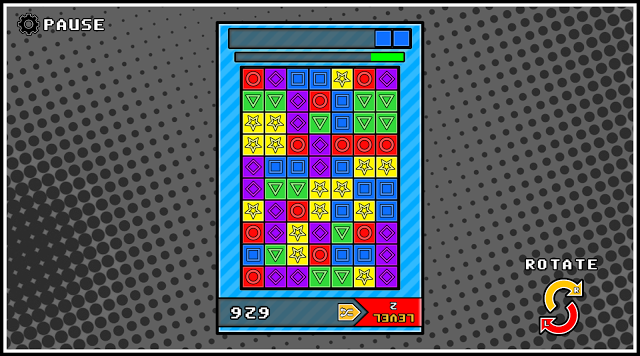 The weekly builds have a LOT of new content you may not have known about!

So, I can really only be brief on the bug fixes. Mostly because they are rather technical, boring, and I don't quite remember all of them. There were sever glitches involving things rotating when the shouldn't or not rotating when they should, menus taking you to the wrong location (or not taking you anywhere at all), particle effects acting weird, and a sprites remaining on the screen after the field transitions to another scene. Not really any of these were game-breaking, but they sure were annoying.

As for graphical changes, oh man, were there a TON of them! Heck, the graphics have even changes wildly during the development of the weeklys. One of the biggest obstacles was having an interface for the gameplay to rotate even on a desktop computer. Now, this was always something we were going to have to tackle, but it was really our trial by fire, so-to-speak. We opted for a widescreen background (starting with an awful grey placeholder and gaining a cool, dark-toned dot background) with the gameplay in the middle and rotation buttons on the side. Hey, it works! 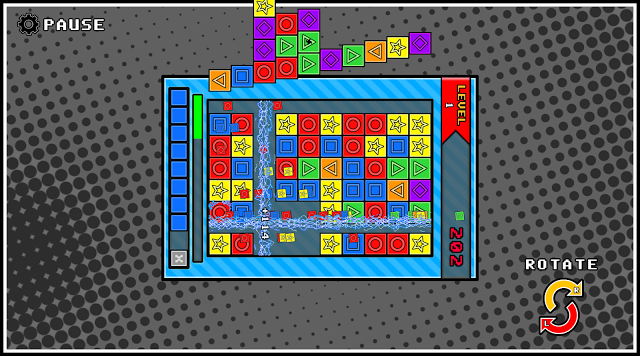 This is NOT a mockup! Yup, our baby is all grown up and pretty!

We finally added an animation to the Jolt power-up as well. We also re-added the Void power-up animation which had been missing from the game after Geoff left and Mark picked up the project. The Chain power-up now also has an animation (a quick white flash), followed by rainbow score text and a visible combo multiplier (mainly because no one seemed to know what Chain actually did before). We also made it when the menu buttons are clicked, they have particle effects like broken blocks (since they are styled like blocks). This was a little something stolen from Megaman X (well, sort-of). It helps get people familiar withe the breaking mechanic before even playing the game!

Teaching the player before even starting the game!

The biggest graphical change, however, was a major graphical overhaul involving nearly every graphical element! Hot dang! Blocks, power-ups, text, and most of the GUI! Funny thing is that I bet not a lot of you noticed. See, this was done 2 fold. The first reason was to make sure all of the images were sized properly to be scalable in HD. The other was for a much bigger reason. See, I had a mock-up that I'd been using since 2012. I would keep it in Photoshop and change it as graphics changed. You may know it as the "7350" mockup, since that's the score displayed on so many of the images we've showed off for Collapsus in the past. 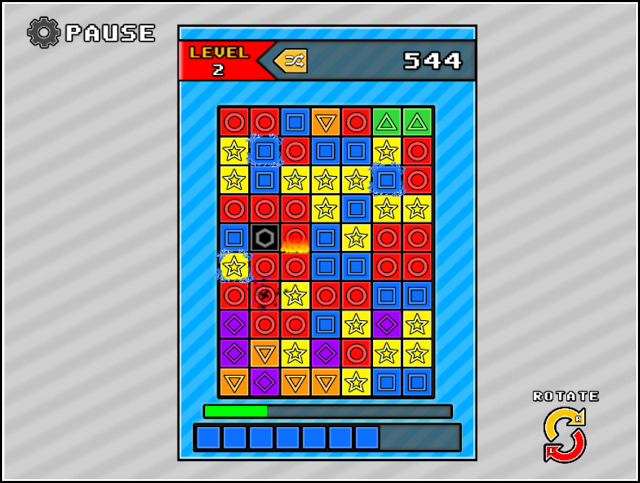 Awful background, not HD, looks nothing like the mockups

Anyway, it seemed that no one programming the game (6 programmers across 11 years, mind) were interested in implementing the graphics the way I'd actually designed them! Well, luckily, I was able to sit down with Mark and, with come considerable edits of my own and a bit of time in the engine for him, we made the last couple builds nearly indistinguishable from the mockup! All it really took, at the end of the day, was poring in the mockup at 50% opacity and then lining everything up with that in engine... but to make sure everything worked well in HD, we had to do a bunch of math. The results are amazing, though, so we can't complain! 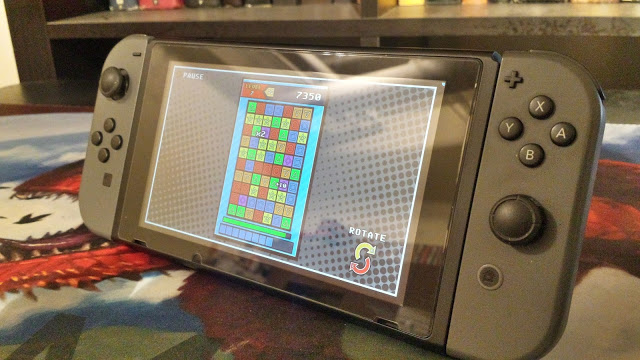 Enough of that, though. On to the new modes! In addition to the 2 harder difficulties, "Expert" and "Diabolical", we now have a grand total of 14 Special (or "Challenge", depending on the day since we keep waffling back and forth on the name) modes out of 25! There were supposed to be only 20, but it's us we're talking about... did you every think we were even capable at stopping at just 20?! Those modes include:

Meltdown: Obsidian blocks that have counters count down to game over

Fatigue: Block meter does not replenish after level-up

Shake-Up: Blocks can be shuffled at will (like the Shuffle powerup)

Flip-Out: The screen can be flipped at will (like the Flip powerup) but not rotated

Spectre: A blind mode where you can’t see how many breaks you have

Wizard: When a block is clicked, instead of breaking it, it shifts to the next Chameleon color

Warlock: Opposite of Wizard, Acidic mode but you tap to change Chameleons to normal blocks

Yup! That's a lot of Special modes, and the rest are very close to being done as well. 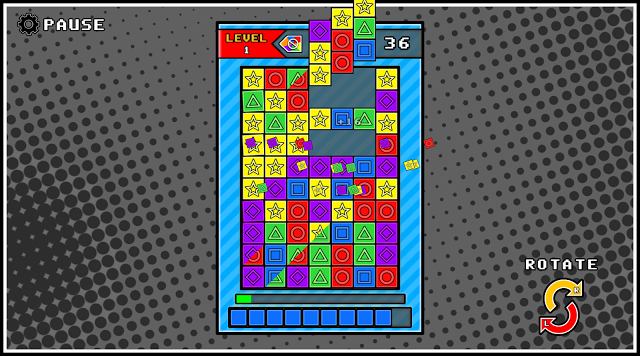 Next is another huge change: we finally have, wait for it... MUSIC! Glenn has been really hard at work making a full soundtrack for Collapsus. I believe he has 6 songs done so far. They're crazy awesome! He's still working on a title theme, since we're ditching the one that we're using right now (and used in the old trailer). He didn't make it and so it didn't really fit with the others (and most of the Wraith team members are sick of hearing it). Glenn is still keeping several elements of it, though, because it did get a lot of praise at several of the events we went to.

We also had sound effects for a while. Those were made by me and not Glenn... and, quite frankly, they sucked! Glenn offered to go back to the drawing board with me, so that's nice of him. They will probably sound like they fit the tone of the rest of the sound design now. I'm not an awful sound designer (I did all of the Radarkanoid sound effects, for example), but my style really didn't fit with Collapsus. Glenn will do a much better job than I did, I'm sure. 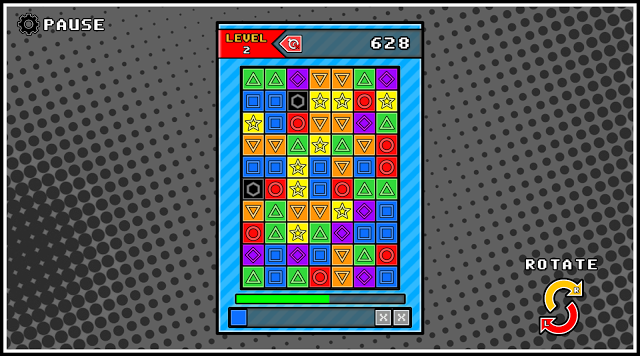 We also made some gameplay tweaks/additions. For one, we have a new Karma powerup, which clears the board of those pesky Chameleons blocks. It comes and goes (and no, I will NEVER get tired of making that joke). We also tweaked "The Bag" (the algorithm by which blocks spawn) to be a bit more fun (less Nova blocks, for instance). The weeklys also saw the introduction of the Shuffle powerup, which does exactly what you think it does, Split blocks for certain modes (they're really fun) and Obsidian blocks in a couple other modes that only clear when they reach the (true) bottom of the screen. We even have a Time-Freeze powerup! As you can probably tell, much work was put into making cool new Special modes. Rest assured, there were some balancing and power tweaks in the normal modes here and there. Luckily not much else needs to be done on that front!

Needless to say, we've been busy! Heck, Kristy's been working on the puzzles for Puzzle mode. She's got a huge chunk done, and we haven't even implemented that mode yet! This is all while she's been working on Radarkanoid3000 and our game jam project, MOTION.rest. It can't take much more time now!
Well, that's all the news that's fit to print for this week (and it sure was a long one).