More mods where the titles just happen to match some PC releases. You know this is just an excuse to port more mods anyway.

Apologies, apologies all 'round. It's been a month now, but the current delays are still caused by certain circumstances in my life, the details of which are only known by a particularly unlucky few. Be happy you don't have to know. The next release will also likely come in more than a couple weeks, but after that, I'm hoping to reclaim my old tempo. In the meantime, let's just move on. We're actually continuing the theme from a month ago, meaning more mods whose names coincidentally coincide with PC mod names. And I still have to write up descriptions for them, ugh. Let's see...

The Final Solution. What do you think of this name? Edgy? Perhaps, but also obvious given the theme, as well as rather poetic. The Final Solution is a very well known PC mod by Treece/Parafraction. Final Solution is a somewhat less known Mac mapset by Pier Luigi Andreoni. Twelve maps for the Second Encounter, though there should be no issues with the Third (not that it matters for us here). The PC mod is, surprisingly, not about Jews at all, but rather mad scientists raising soldiers from the dead; you know the drill. The Mac mod isn't actually about anything at all, the author simply promises absolute HELL. Mapping appears to be par for the course - tight design, many enemies. Fairly long and pretty well decorated floors. Worth a go.

Despite being two entirely separate entities, the two Final Solutions do share a certain trait: they come in more than one flavor. For the PC mod, I have in my collection a beta, full versions 2.0 and 3.0, as well as the very recent Final TFS, a sort of polished 2.0 version for SDL. The Mac scenario comes as a five level demo, and then as a release entitled Final Solution 2. For a while I was uncertain on the exact status of the latter - I mean, is it actually a second part? A sequel? Can't be, after all it resuses the demo maps, although with some design improvements. So is it a second demo? I thought so at first, because the original demo promises 30 maps for the final release, while this only has 12. But then, Pier Luigi's ancient website describes Final Solution 2 to be, well, final. And then *again*, the version here (distributed by Clubey as sent to him by the author himself) has 12 maps but the website says 14. Lots of mysteries around here, but for my own purposes, I'm considering this to be a full release. If a 14 map version exists, it's most likely gone forever. Either way, both the demo and full versions are ported here.

Interestingly, in the same readme Clubey actually name-drops the PC mod, noting that the two have nothing to do with each other and the naming is merely a history-related coincidence. Astute.

A word about the author, I guess. Outside of his brief Mac Wolf stint, Pier Luigi Andreoni is an accomplished musician, composer and multiinstrumentalist who has led or participated in many outfits, gracing numerous albums with his uncanny skills. I have heard a few pieces and while my understanding of music theory is nil, I find them simply interesting and pleasant to listen to. Look him up on Discogs.

===CREDITS===
Pier Luigi Andreoni. Because he's a public personality (got his own modern website, Italian wikipedia page and everything), I won't toss links around, but you can easily find out yourself. 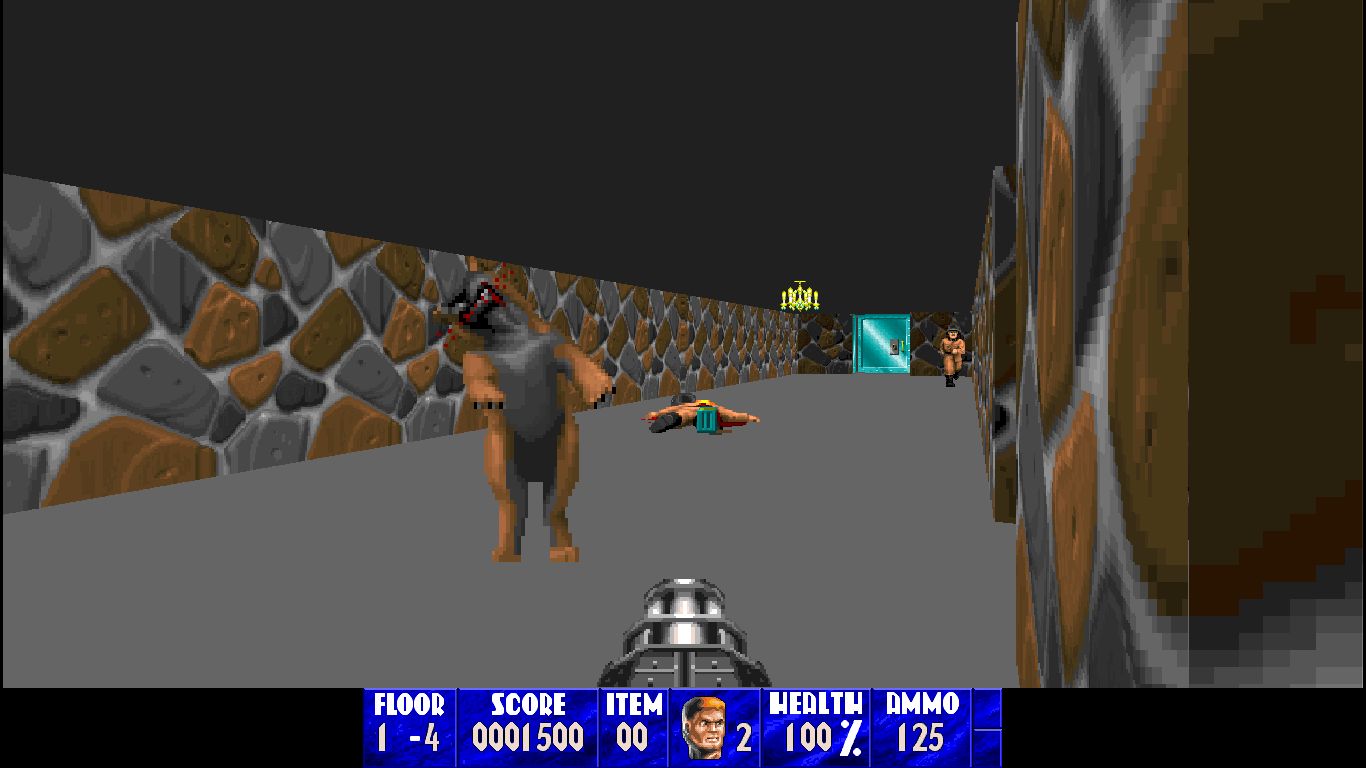 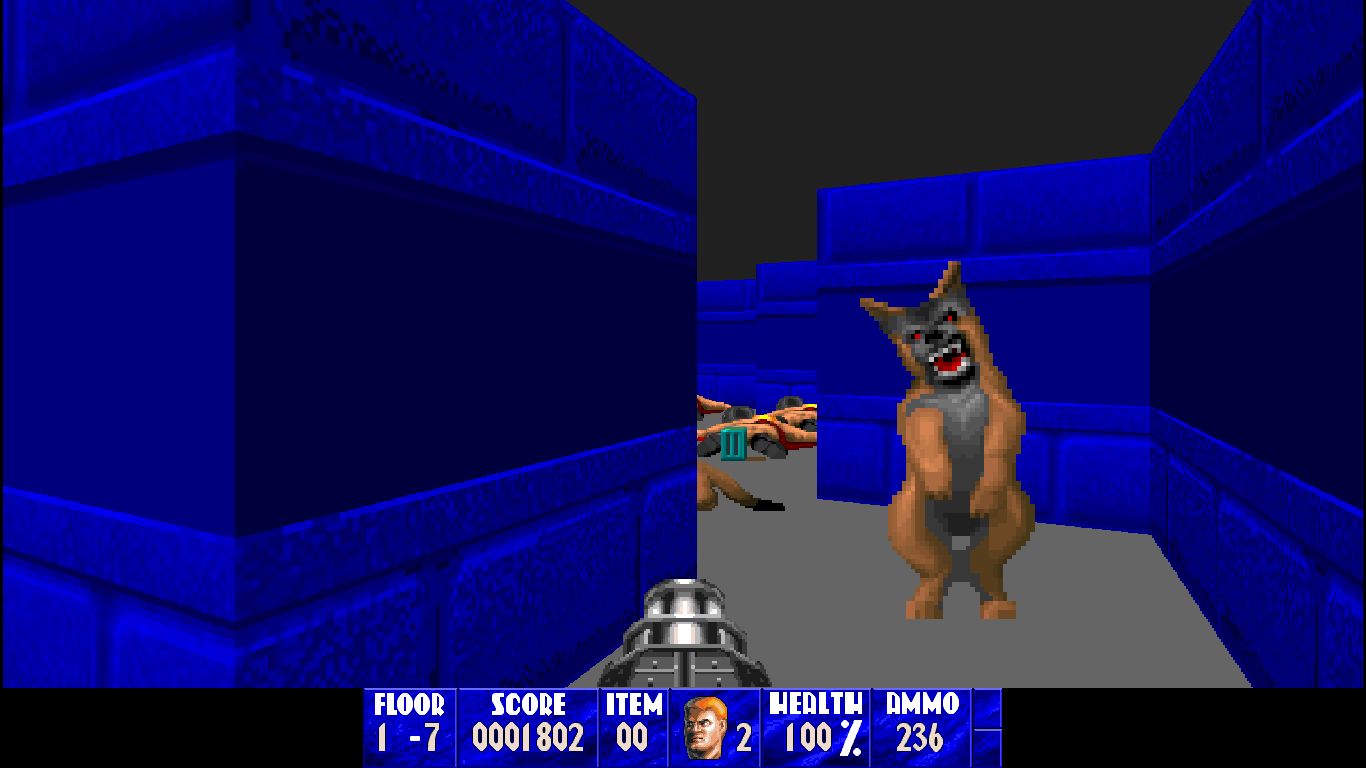 Schoolenstein, Schoolenstein. Combining Nazis, first person shooters and schools seems like extremely risky business, given what happened with Doom, but in the Wolf community it has been tried a bunch of times and nobody cared. Schoolenstein for DOS offers 10 new maps by Spiffingerroneous, while Schoolenstein for Mac comprises two new maps by ET Software/ERupinski. Both games come with a fair deal of new school-themed graphics, and while certain quirky details differ (like why are you looking for the Spear of Destiny in an American school?!), the overall storylines are similar: the Nazis have overtaken one school or more, get rid of them and kill the principal along the way. The two maps aren't very big and have a blocky desing that you would expect of a real building, but they're heavily decorated and overall competent, and so taking the time to explore what they have to offer should be worth your while. 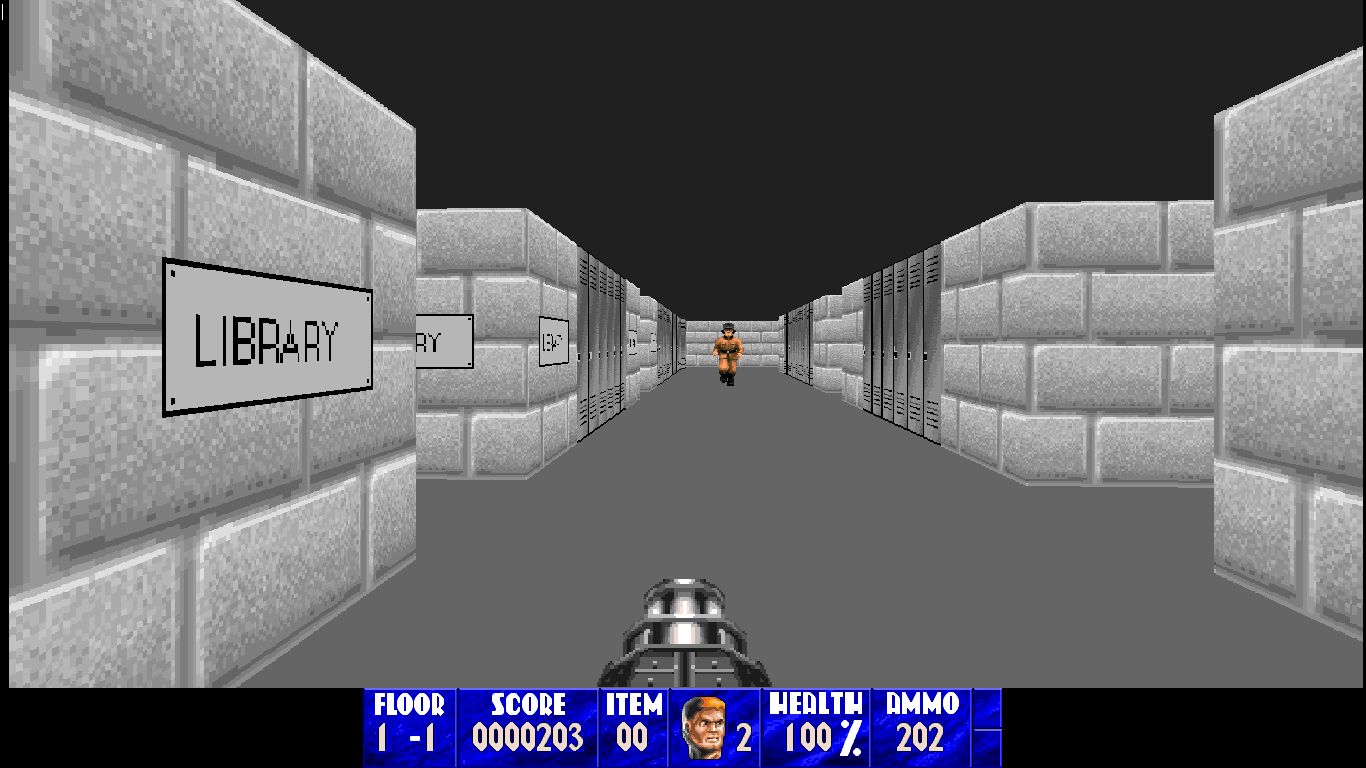 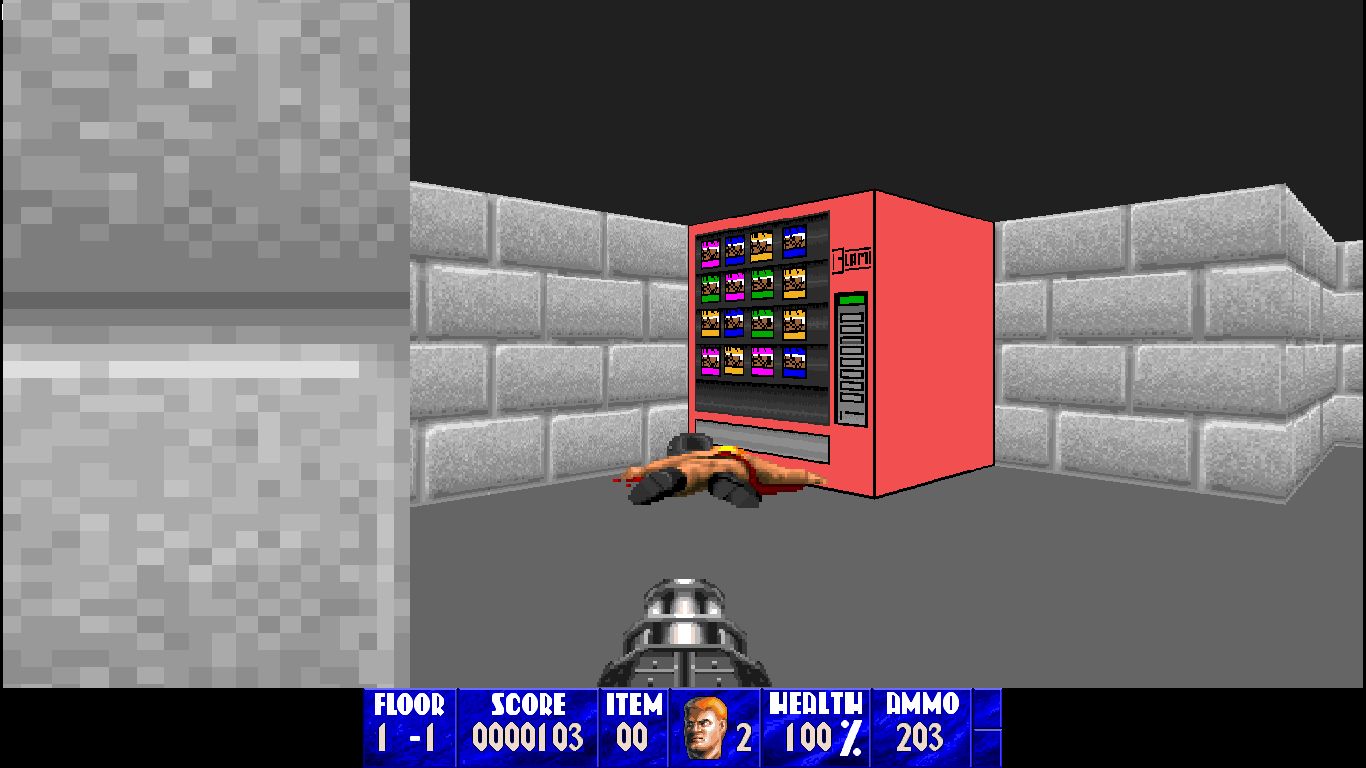 Although my files say 1998, Return to Wolfenstein for DOS by Kurt Funkyhouse was only released on the first day of 2000. With a storyline about Schabbs, 20 new maps and some changed graphics, it was an acceptable offering. Return to Wolfenstein for DOS has no new graphics and only 12 maps, but does smaller necessarily mean worse? Nah. Some maps are more interesting and some - less so, some are very small and some - expansive, but they average out to what I have to once again call "par for the course". Ultimately it's another Mac mapset, which means you will play it anyway. You might not think so at the moment, but stop kidding yourself; you will.

===CREDITS===
There was no readme included, so I don't know anything. 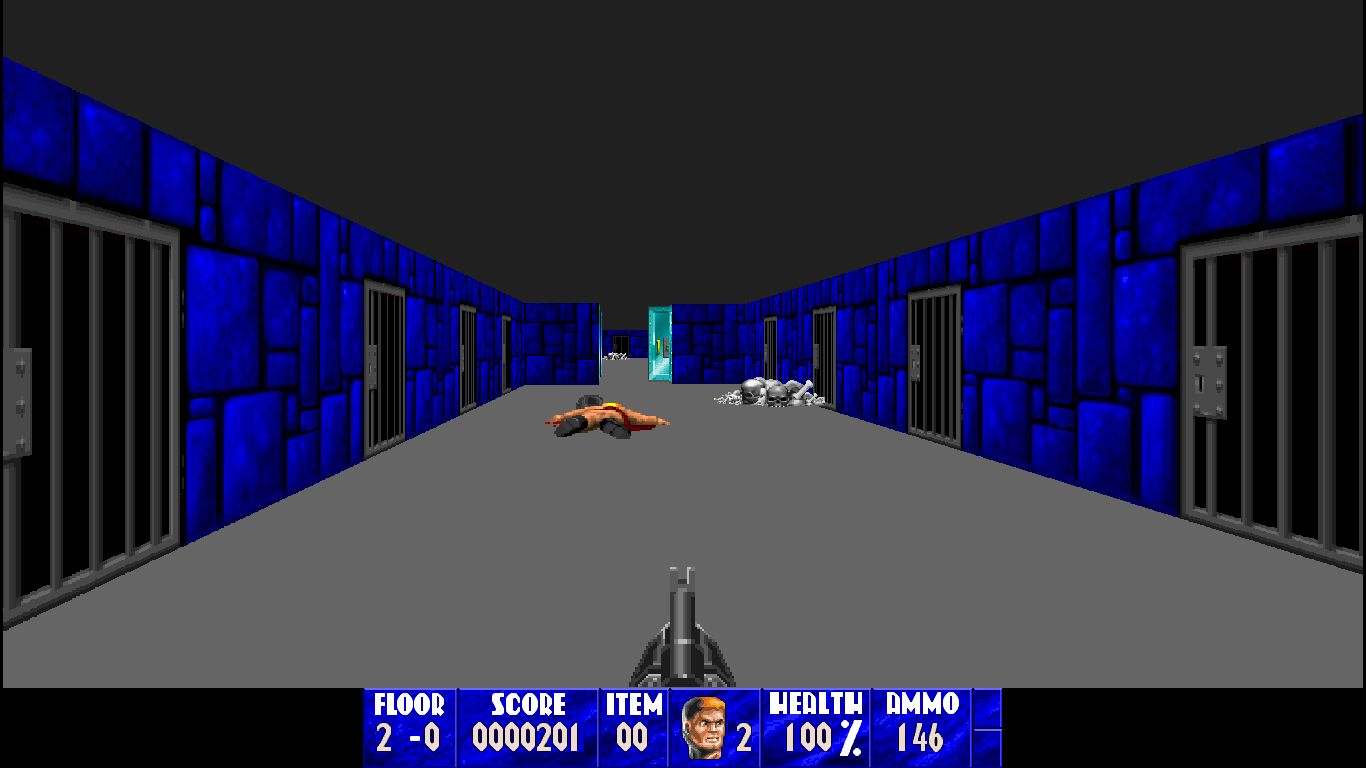 And so at the end of our journey, we arrive to the Third Reich. A pretty cool place, isn't it? No? Well I suppose you're right. Clearly, Wolf modders were thinking the same thing, as the friendly country's name surprisingly rarely appears in mod titles. Truth be told, this one is a tad of a stretch. In 2009 (demo) and 2010 (11-map full version), Dynamite released The Third Reich Episode 1: A Dark Secret, with new maps and graphics as well as code changes made by WSJ. Story: kill Fettgesicht. Somewhere in 2001, sushi released a 10-map version 1.0 and a 15-map final version of his mod called The Third Reich. Story: kill Schabbs. You also get some new graphics in the package, with various amounts of neatness, though most of it seems to be familiar, vanilla-style stuff. Some at least I remember from Munchkinstein. As for mapping, what can I say? Tight, extensive, blocky, densely populated - I guess these adjectives fit best, as is often the case with Mac scenarios. While certain places and even entire levels stand out of the crowd, in general you are likely ready for what you're about to see. Remember, 15 maps. Well, or 10, since both versions are included with the release. Still, can't resist that.

===CREDITS===
sushi, who can be messaged at bmoore (at) olympus.net, but will he write back? Of somewhat more interest is his personal website at Olympus.net which can be still found, in part, on archive org... Happy browsing. 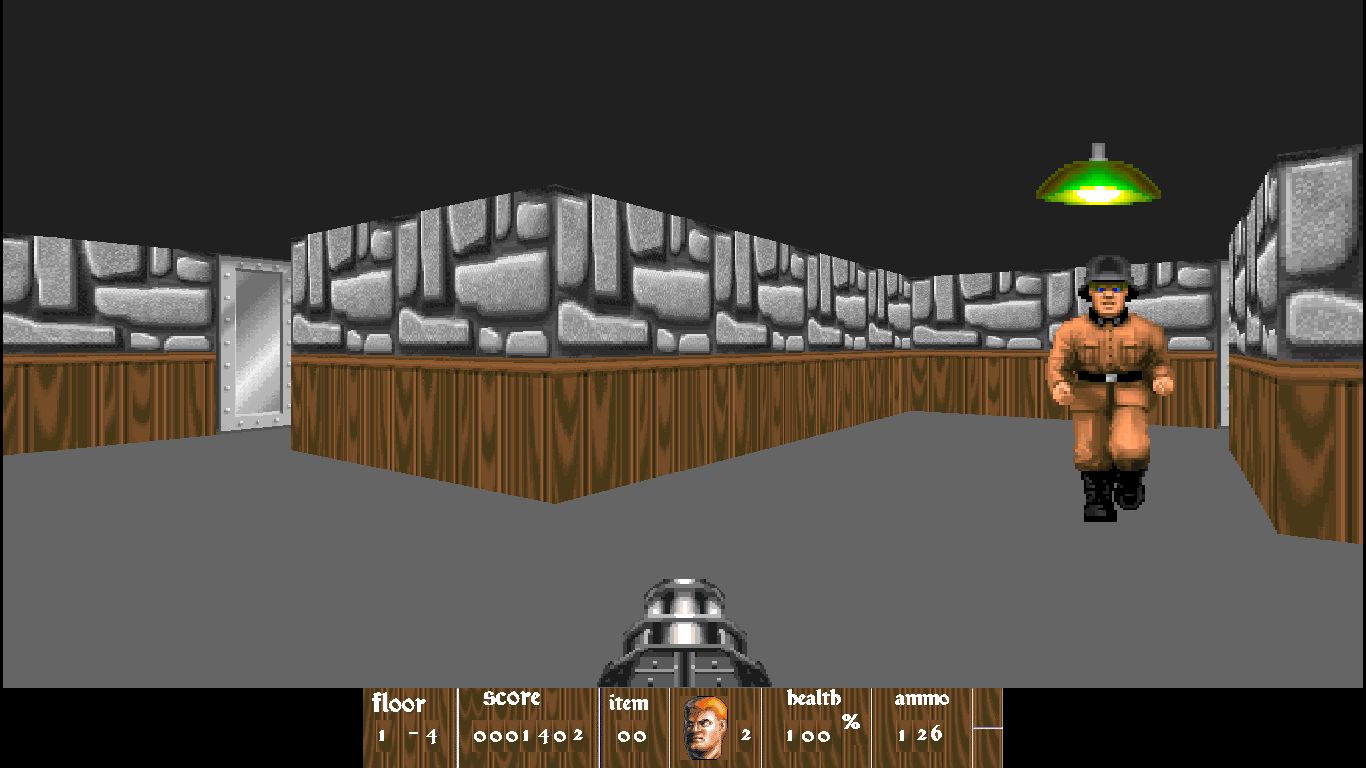 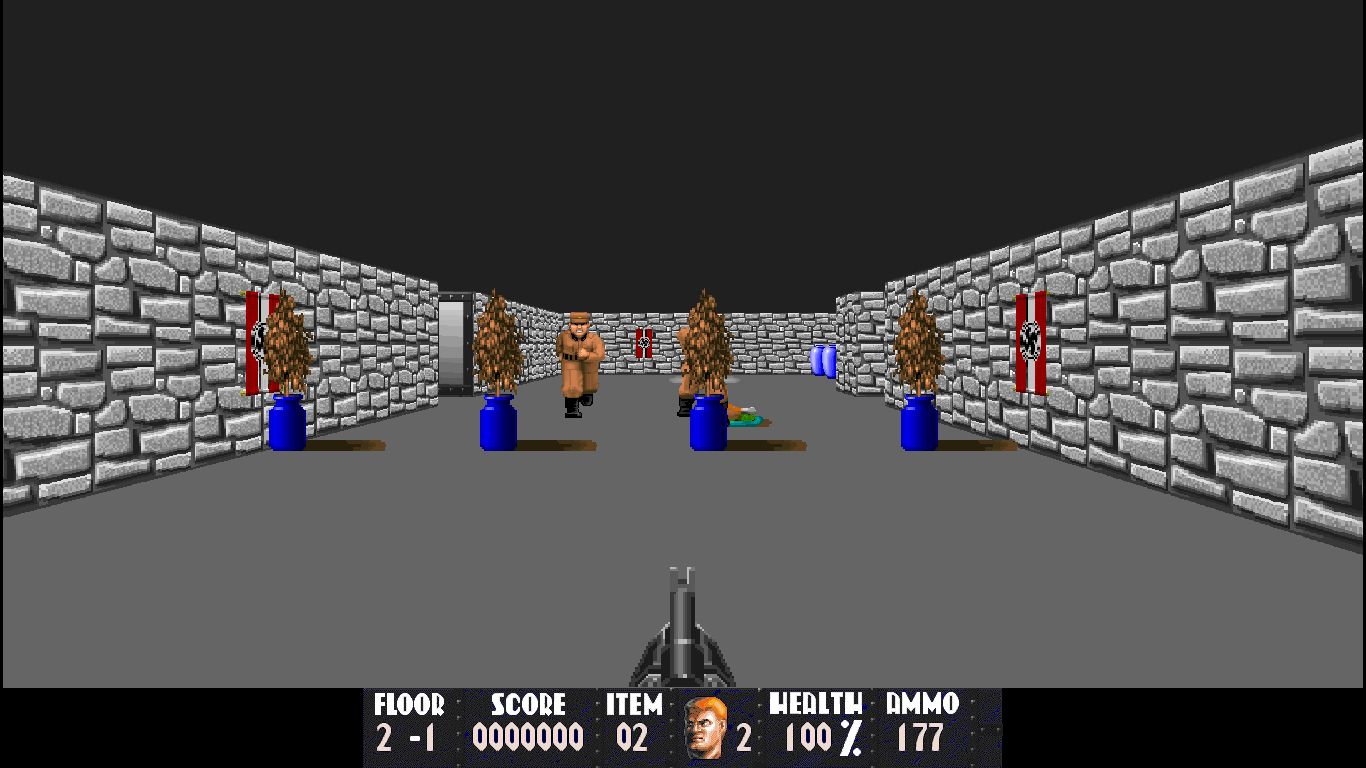 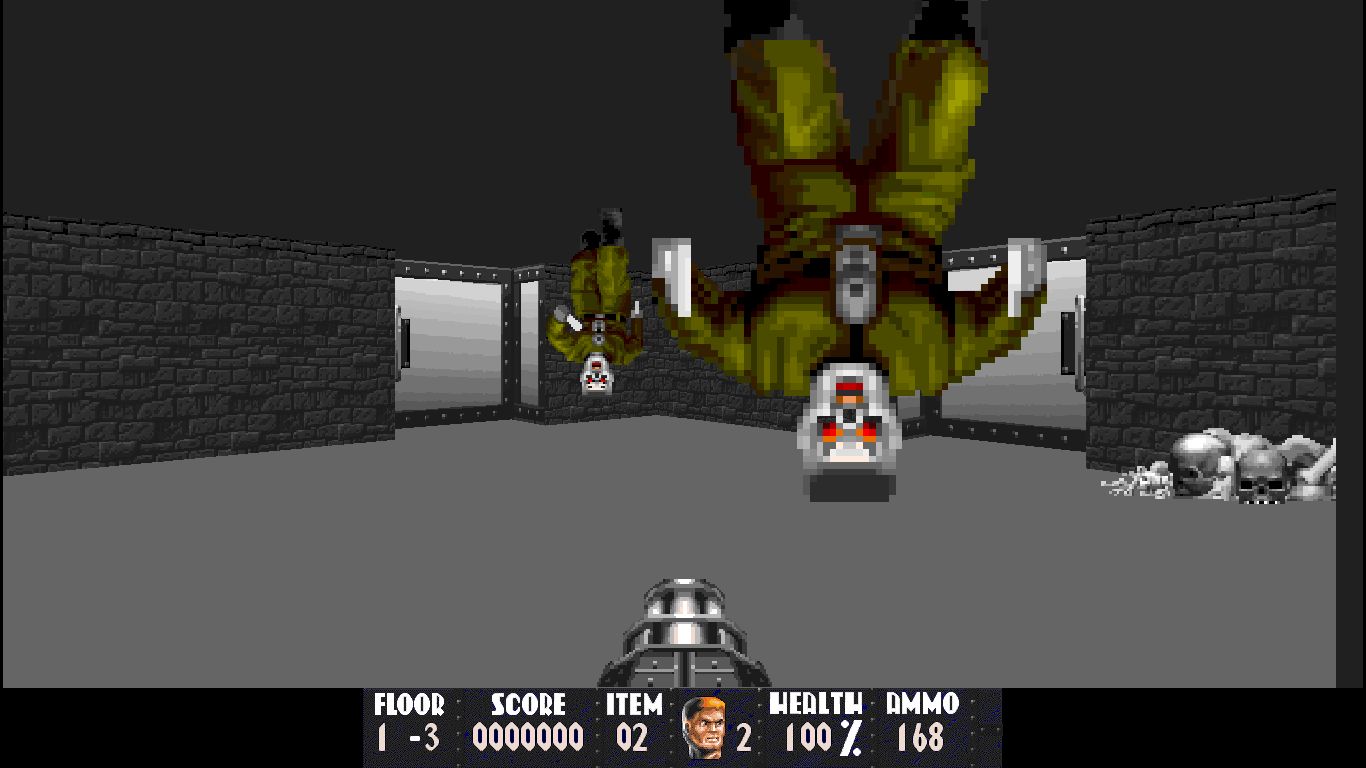