As of today, 18th of January, Company of Heroes: Eastern Front has gone gold.

All Development is now completed for our first release of Company of Heroes: Eastern Front. All that is left now is integrating our already proven and tested launcher, packing the release version into an installer and uploading it. Everything is going according to plan, and nothing is in the way of releasing on the 21st of January.

To get you guys a little more excited, here are some of our new unit cards - they are done with actual ingame models: 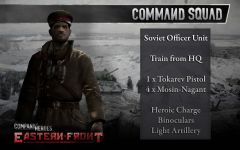 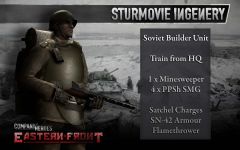 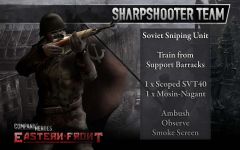 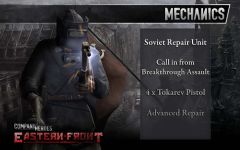 Some relevant information about our 1.0 release: It can be run with either CoH, OF, ToV, any combination or all of them. It can be used with the steam based installation. We will release EF 1.0 with an auto-installer and a game-launcher, which will also automatically check for updates.

Three years of development. Now it's only three more days! See you on the 21st!

Yessss... sticking around and bugging everyone for a year or so finally paid off :P

I definately think that this question have asked uncountable times, but I couldn't get right answer on this: How would the result of game be confirmed? Will Soviet win/lose count will be added on my original COH profile? And How??
How about win/lose count for AXIS? And is it able to meet Soviet as team?ex)US,Soviet,Brit vs AXIS

Win-Loss statistic won't be counted initially because the information is stored on Relic's servers. It is something that we are trying to do, though.

And yes, you can play US, Soviet, British vs PE, Wehr

Can i be a nazi and kill the commie scum?

Sure, but no amount of kill will stop you getting your *** kicked ;)

lol.
i love your guys enthusiasm about this xD

RUN TO BERLIN NAZI CHICKENS........... AND TELL THE AMERICANS SAVE YOU FROM THE SOVIET TROOPS...

run to ur USSR back coward, o wait then you get SHOTTED! NOOB

Thursday will be great.

oh god only two days waaaaauaaaaajajajajaa,two question the tiger tank is buidable or only off map?

any change in werh or panzer elite?

Yay! It's coming out the same day I've my first exam :)
It'd be a great thing to test in the evening!
Cool :)

Wow. Your mom is really quick.

I can't wait to unleash the IL-2 Sturmoviks upon the puny Panzer Elites units. And the mighty ISU-152, will it be comparable to the King Tiger?

I am so excited I am putting on my shuba.

This is an incredible effort. I am new to PC gaming and have a quad core i7 set up with 6g ram and HD5850 graphics card.......my first game has been COH which I am still enjoying.
This will be a fantastic addition to an already amazing series so thank you very much.

Where will we be downloading from??

It will be made pretty obvious once it is released.

At some point throughout the day.