Use forbiddenlore.gridsagegames.com to help hunt for in-game clues to passwords scattered across the internet and get access to FORBIDDEN LORE. 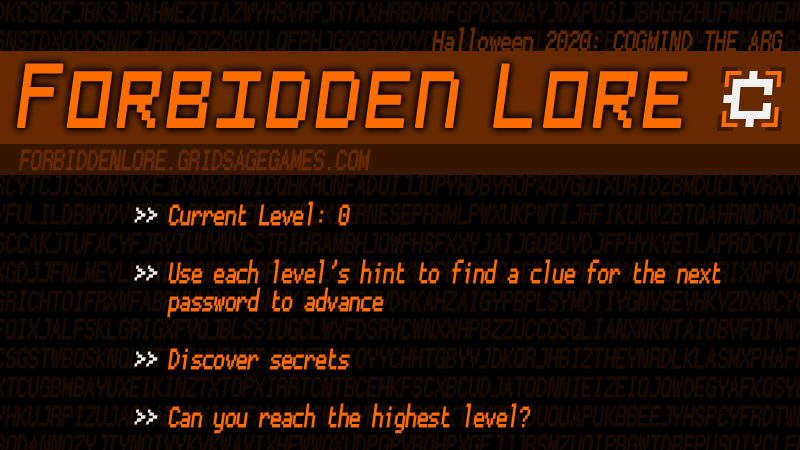 It's a special event for Halloween, and more!

Starting today and for the entire next month, playing Cogmind automatically enters a new mode built as part of a Cogmind/roguelike/tech-themed ARG. Unlike previous special modes, this one doesn't actually make sweeping gameplay changes, but instead challenges you to hunt for clues with help from forbiddenlore.gridsagegames.com, scouring the game and internet for passwords to special lore. More on that later...

As you'll see in the changelog, this release is clearly much bigger than just the event, scoping larger than planned as I started early on work to make some of the balance adjustments scheduled for Beta 11. There is still a lot more to come on that front, but a few items were either more urgent, or just things I felt like prioritizing a bit to see how they pan out as considerations regarding the bigger areas of the upcoming rebalance continue to get hashed out on Discord and the GSG forums.

Beta 10.2 also includes a bit of new content, but I'll be leaving that for players to discover.

(I didn't highlight "more important" entries in the changelog like I normally do, since the vast majority were being highlighted anyway when I went to do that :P)

Saves from earlier versions are incompatible with Beta 10.2, but even if you're on Steam and Cogmind automatically updates, Beta 10/10.1 is still available via its own legacy branch and you can roll back to finish a run in progress first if you like.

As with any other release, I might do quick unannounced hotfixes in the coming hours or days if players discover/report something new and urgent (the chance is somewhat higher with 10.2 because this release went without the usual prerelease playtesting by Patrons to keep it a surprise for everyone). We now have an even more specific version check system based on build number, so if you're playing and have the News feature active, it'll remind when you're playing without the most recent hotfix.

Cogmind is pretty big on lore, creating a deeper world with its various factions, NPCs, and the stories they share. And there's so much more room out there! In the lore you can already find references to pieces of the world which don't currently exist, some of them likely to happen one day (some of them guaranteed :P), but reliable information is spotty. This Halloween event will fill a few gaps and also give glimpses of other locations and inhabitants of Tau Ceti IV.

Starting from the event's home page, at the bottom you'll see your first hint. Hints suggest where in the game world you'll find either a password or another clue as to how to obtain the password, and with that password you can follow the link on the event page to the next level, which will also reward you with FORBIDDEN LORE (and usually a bit of art to go with it). For simplicity the username at every level is always simply "cogmind", it's the password that will be unique each time and that's what you'll have to figure out. In-game clues can take a variety of forms, but are always presented as some sort of text, be it NPC dialogue, a special announcement, etc.

Although I know at least a few people who could definitely complete this entire challenge on their own, not everyone will be capable of figuring out every step alone. Don't be afraid to ask the community for tips or additional hints along the way at various levels where you need it. I'm sure there'll be plenty of discussion and help available on the Discord.

Working together with others to solve the mysteries would also make it easier to rise through the levels more quickly, since multiple runs will be required to follow every hint. I suggest using a new password on the site immediately after discovering it, in case the next hint is somewhere still within reach in your current run, in order to achieve it more quickly.

This being an ARG, most of the passwords are actually found outside the game itself.

Shout out to PlasticHeart for putting together the CogFont based on fonts developed for the game, which came in quite handy when making the event website :D

Forbidden Lore mode will automatically activate for you on new runs started on or after 10/29 (through November), if you've played at least 10 runs before.

If you want to play beyond the end of the event, or regardless of your run count, you can still force it by adding a command line parameter when running COGMIND.EXE: "-forceMode:ForbiddenLore". Within Steam this is handled by going to Cogmind > Properties > Set Launch Options, like this example from Player2 mode earlier this year: 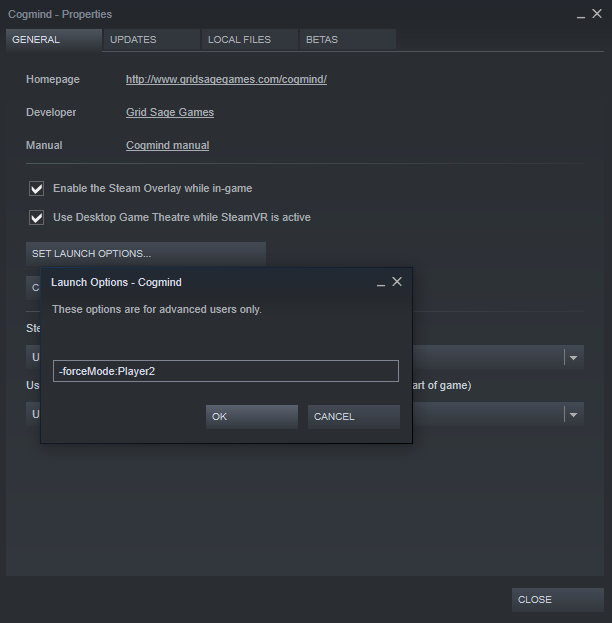 (Note that although the event mode will be accessible after the period is over, and likely also in future versions, but I can't 100% guarantee that it will be fully completable forever since, as an ARG, advancing relies on the presence of information found outside the game, elsewhere on the internet.)

If you want to play a regular run during the event*, you can suppress date-based event triggering by adding the "-noSpecialMode" command line parameter: 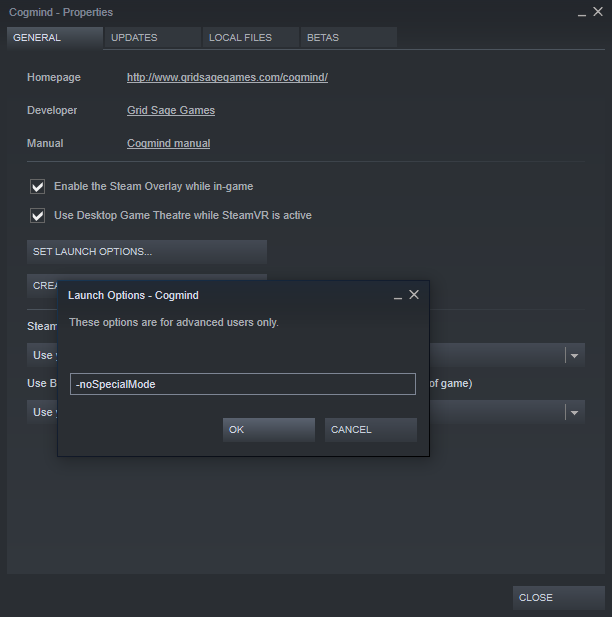 If the event mode is active, you'll see a notice in your message log on startup.

*(though again this mode doesn't really affect much in the way of gameplay, even though runs in this mode will technically go to a separate leaderboard)

Beta 10.2 includes a fair number of nerfs, and the changelog itself isn't nearly as balanced as I like to keep it (an equal helping of both buffs and nerfs/new features is best), but we'll be getting plenty more buffs and fun stuff to play with in Beta 11, and in this release I just took advantage of the opportunity to prioritize responding to areas the community has been cheesing the hardest by moving up planned changes, or just increasing the overall challenge level of various parts of the game.

Also a number of the nerfed bits here were intentionally introduced as OP features with the intention of tweaking them after seeing how they were used.

On that note, against the trend there is a new potentially OP weapon you might be able to get your hands on ;)

To address some of the biggest changes here...

All those easily-hackable single-tile door terminals that were a major security liability for 0b10 are a thing of the past. They now do nothing more than open their door, as opposed to providing one after another weak backdoor into the mapwide system :P (i.e., no indirect hacks there). All such terminals now also have unique names so they're even more recognizable at a distance, the majority simply being called "Door Terminal," although this change also applies to the other instances of special-purpose terminals that control something nearby.

Prior to now, with assistance from door terminals a good hacker could very easily end up with far more terminal resources than they could reasonably need and exhaust, especially in certain branches with lots of blast doors. Now instead of simply running out of hacking target ideas, these builds may in some cases have to be a little more selective, or in some cases have a (slightly? xD) harder time getting access to a suitable Terminal on short notice.

This change does also negatively impact builds that could only effectively use low-level Terminals to begin with, but those builds have had numerous buffs over previous releases to begin with.

Another change related mostly to flight-hack builds is that alert is now also raised when enemies lose track of you! The primary hostile interaction for gaining alert has traditionally been through destruction, but if you're zipping all over the place frequently attracting attention then slipping away it makes sense that the Complex should respond to that, too.

I'm really interested to see the results of this change, which could add a bit of pressure to flight runs and make stealth approaches that much more enticing rather than simply outrunning everything but then safely remaining on the same map. The amount of alert involved here might be further tweaked, but we'll see how it pans out in the current release first.

Also the current result of high alert accrued via this method will be assault dispatches, as usual, but the response will be different in future versions--I just haven't gotten to that point and added this bit first.

Programmer allies were nerfed by making them unable to hack if disarmed, a sad loss because it was quite fun to have a disarmed hacker friend literally owning everything, when it happens naturally, but players were starting to intentionally create these OP allies so that behavior had to be removed and put them on par with hostile Programmers.

Master Thieves got a pretty significant overhaul. They've been in the game for a while now but no one was really taking advantage of them until much more recently. Even more changes are probably in order, but the related mechanics are no longer quite so abusable.

A range of individual parts were adjusted as per the changelog, mostly nerfs of various degrees, although you've also got single-slot Terrabombs now, which will make those a lot more enticing (technically that and a few other items on the list were modified as part of silent post-release 10.1 updates, but are included in the changelog this time around since they were otherwise not recorded or announced here).

There's not a ton of QoL like we usually have each release, but I did add Escape key support for recentering on Cogmind while cycling through multiple drone views with Enter:

Cogminder aoemica has built a wonderful tool, dubbed Cog-Minder, a very convenient site to filter and search through Cogmind's many items:

Notice the Spoiler button there which can be toggled on to include everything, even uniques and other special parts you'll only find in mid-/late-game branches or the extended game. You can leave that off if you're just starting out and want an unspoiled experience but would like to examine "regular" parts.

Over on my Twitch channel I streamed my first Beta 10 run, a hover run that eventually went on to obtain one of the new endings:

That's the first of five videos, a looooong run because 1) it hit a ton of locations and 2) there was a lot of discussion along the way :P. (More recently on the channel I'm trying out the space roguelike Prospector, which is pretty cool.)

Starting this week over on Patreon we're also voting for secondary QoL features that patrons want to prioritize for Beta 11, so the results from that should probably be known by the time the next announcement comes around.

I leave you with the amazing Mobile Combat Recycling Unit by Zyalin! 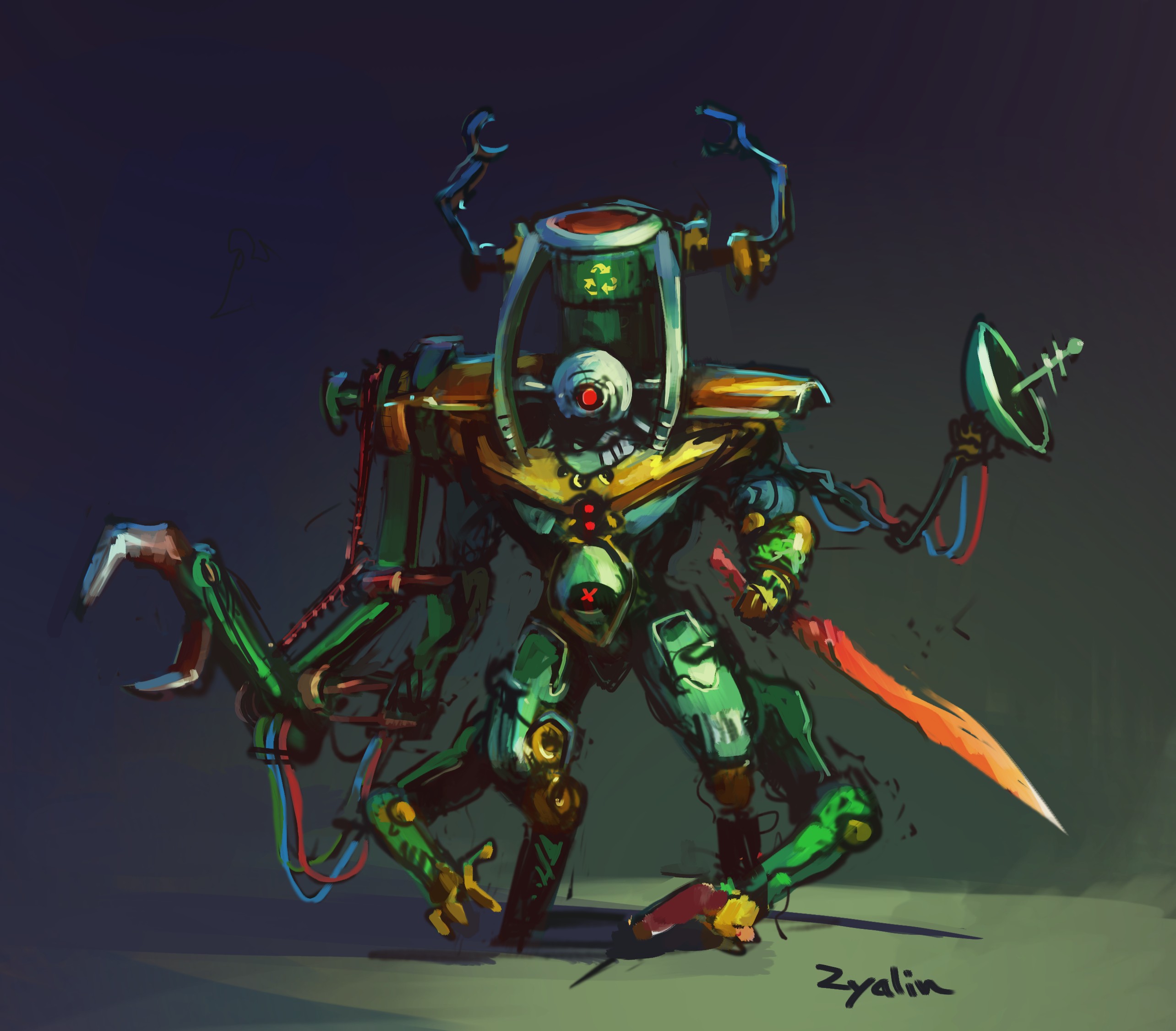 We know what happened after a good year or more of players joking about the possibility of "Combat Swarmers" (TRACKERS!). Well, the long-running joke that followed that is "Combat Recyclers." Hmm...