Cross-section of the many unique types of ASCII art used in Cogmind.

Cogmind's ASCII art has drawn a lot of attention where it's been shown on Reddit and Twitter, but I haven't been showing much of it here on the blog. I suppose it makes sense to accumulate enough of it for a grand one-place-to-go-to-see-Cogmind-ASCII-art type post.

ASCII art style is traditionally divided into only a handful of categories: shaded art that uses groups of characters based on their pixel density, block art (similar to pixel art, but with really big pixels), and line art. Cogmind falls into the last category, relying mostly on line segments and the occasional block or other glyph to form a semi-abstract outline of an object and its details.

In terms of game objects, Cogmind contains art for both items and machines. You won't see robot art--their appearance is left entirely to the imagination (except in tiles mode, of course).

For more general reading on the background of ASCII art in roguelikes and Cogmind, see this earlier post.

The majority of the art belongs to items, of which there are currently 638. It took about two weeks (103 hours to be precise) to draw and paint each individual item, including the time spent working on concept sketches and color schemes.

Keep in mind that in choosing the following art, to avoid spoilers (and giving away all the best stuff) almost no high-end parts are shown. Many of those you'll find in the game look cooler than what you see here.

Weapons make up a third of the items, and therefore about a third of the art. They're the only category that makes heavy use of color themes for easier recognition. Among them you'll notice green, yellow, or blue for energy weapons, changing to orange, red, or purple for many of the more powerful ones. Most ballistic weapons use a brown/white scheme, though they break that mold at higher ratings.

Guns, Thermal: Damage has low variability, and firing causes no recoil but is usually only effective from short to medium range. Also increase target heat on successful impact.

Guns, Electromagnetic: Cause less physical damage in exchange for the ability to corrupt the target's systems, an alternative way to destroy a robot. Some EM weapons are also capable of temporarily disabling individual components or an entire robot.

Launchers, Explosive: Affect all targets in the area of effect, dividing damage into chunks that are applied randomly across each target. Targets further from ground zero usually take less damage, and there's rarely useful salvage remaining from targets hit by explosives.

Launchers, Electromagnetic: EM weapons that affect all targets in the area of effect. Collateral damage is low, though these are the most effective way to bring down multiple armored targets at once.

Special: Unique weapons that don't fall into any other category, either tools or those with special effects.

Melee, Impact: Cause knockback, and the impact is much more likely to damage fragile internal systems.

Melee, Slashing: High damage, and capable of severing parts clean off the target.

Melee, Piercing: Critical strikes are more likely, in addition to a bonus to directly damage a target's core.

Another huge and varied category. However, colors for non-weapon item types generally don't follow any particular scheme, instead using whatever looks good for that particular design or makes the most sense conceptually. The primary exceptions: matter-related parts are usually purple, and processors/hackware are colored based on the stat they augment: 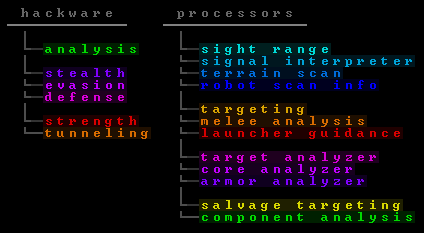 Processors: Lightweight components that benefit a single stat or ability. For these I went with a microchip-style appearance (border style indicates the relative effectiveness of each part).

Hackware: Like processors, except their benefits apply specifically to hacking.

Cooling: Devices that dissipate heat, for those loadouts which produce excessive amounts of heat under certain conditions. 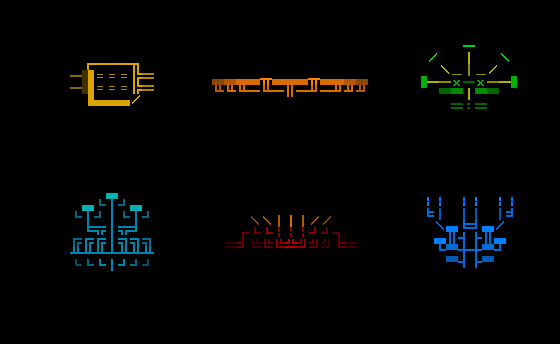 Offense: Enhance offensive capabilities of some weapons, or mitigate negative side-effects of their use.

Sensors: Devices for detection and analysis of the surrounding environment.

System: Help deal with system corruption, memory issues, and a range of malfunctions.

(The above groups were subdivided for art categorization purpose--as classified in game utilities fall under only six designations: Devices, Storage, Processors, Hackware, Armor, and [REDACTED]. The last category you can discover later in the game.)

Flight: Don't support much weight, but definitely the quickest way to get around, and even fly over enemies.

Hover: A fairly fast form of movement that can still support a good amount of weight (the viability of both hover and flight have been improved significantly over the 7DRL version).

Wheels: Easy to find, but hard to keep--most wheels are not made for combat.

Legs: A good mix of weight support and speed. And yes, you can hop on one leg ;)

Treads: Slow and heavy duty, for the tank that needs to carry everything and the sun. (No really, you can carry a miniature sun if you need the power.)

An essential but not so varied category in terms of game mechanics. By functionality, the main subdivision for power sources would be "standard" vs "light/micro" versions, where the latter weigh less but in turn come with little capacity for energy storage. But this division is not reflected in the classification system, which is instead based on power level:

In this case the art is the on-map image itself, made possible because machines are multi-space props, something you don't see too often in ASCII roguelikes.

The five types of interactive machines have each been covered before--this post contains links to pages describing their functions (along with art, though some has changed since then). Below you can see some variations of Terminals (T), Fabricators (F), Scanalyzers (S), Repair Stations (R), and Recycling Units (Y). 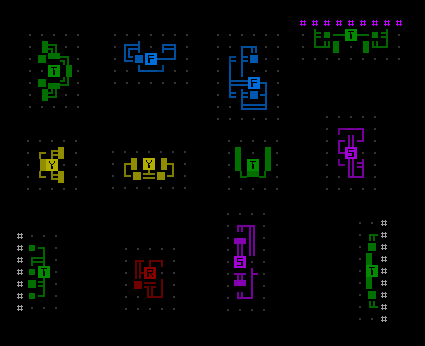 This category of machines is mostly for atmosphere, though some may explode if not treated nicely. There are over 100 non-interactive machines which appear in areas that make sense for their intended function. 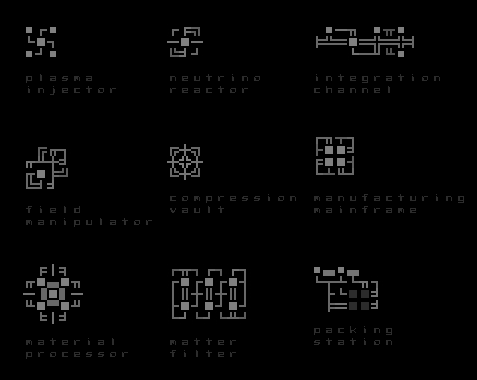 All the item art appears in the data screen for their respective item. Opening info about an item displays its image at the top of the window, animating its appearance:

The game already features some full-sized screens of procedural ASCII, though the title screen is the first of them to combine static art with animation:

Read here for more about how the title screen was put together.

More such animations will be added later for components like the evolution, game end, and game over screens.

I also consider the UI to be art, though more so when in motion.

ASCII particle effects are similarly a form of art, and come in various styles unique to Cogmind. The primary difference being that none of their components are manually drawn--they're created purely by procedural scripts. Many of these have been shown before in dedicated posts here and here, and their making was discussed here. 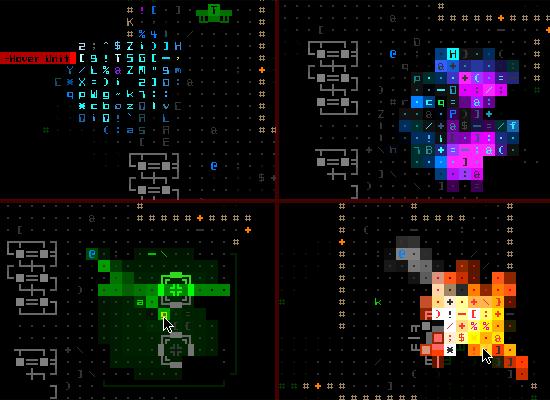 ASCII particle effects--stills from the above gif.

All of the art in Cogmind was created using an in-house tool: REXPaint. I've made it freely available for anyone to use, so check it out! In a future post I'll be covering REXPaint's many potential uses in roguelike development.

If you're interested in the process used to create some of the game's art, specifically the item art, I've written about it in detail here.

Glad you like it, just sharing a little sliver of each of the many visual elements of my magnum opus :D. Much more to discover and experience in game.

Feels like it's taking forever to make (as any epic production should...), but we're getting there! Back in full production now after lots of stops and starts over the past months. Finished up most of the AI this week, and won't be stopping development until we reach that first release.

Wow this is looking really awesome!
Must have took some time to create all of those :D

Thank you! And yep, just the item art took over 100 hours. Not to mention all the particles, UI animation scripts, and general visual design.

:D. This post is a little ahead of its time, but I decided to drop this particular awesome bomb early while the IOTY voting is still in progress, just so more people see it since Cogmind already made it into the Top 100 =p

Thanks! Hard to compete for votes against the big games already released and on Steam etc., but maybe we'll get a special mention. Next year the fun really starts ;)

I wouldn't get too disheartened - the effort you're putting in now will definitely pay off long term and players will appreciate your attention to detail. Keep up the great work!

Oh no, not disheartened in the least, just being realistic! Cogmind is getting wonderful reception everywhere I've shown it so far--couldn't be happier =p, it's just not ready for the limelight just yet ;).

Fantastic! You seem to be onto something special :)

Agreed, I believe it's just because Cogmind is so *different* from everything else out there, especially in this time where there's a massive proliferation of games, many of which are very samey. It also has an "art game" quality to it, yet it also features deep gameplay and replayability, a pairing you don't really see that often.

I'm glad I picked it up again after a year of letting it collect electron dust in my old games dir ;)