Infinity Ward's latest Call of Duty offering is debuting an all-new gameplay experience with Special Ops mode. Based on co-op centric, arcade-inspired challenges, Spec Ops mode is broken up into five tiers of missions, each allowing for up to three stars based on difficulty. Players can jump into Spec Ops from the main menu at any time -- it's completely independent from multiplayer or the main campaign mode -- and begin earning stars to unlock the next tier of missions, starting with Alpha, and moving to Bravo, Charlie, Delta, and Echo. All in all there are 23 challenges to check out (a few of which are co-op only), for a starting total of 69 stars in all.

Most missions can be taken on solo (we don't recommend it), but every mission in the bunch supports two player via either split-screen or online on Xbox Live or PSN. PC players don't have split screen for obvious reasons, but can connect via online as expected. The possibility for expansion in the mode via additional downloadable content has been hinted at by developer Infinity Ward, but with nearly two dozen missions on day one, Spec Ops mode is going to dominate more of your time than you may expect. Then you can prepare for a second round of addiction to Spec Ops when a promised game update releases post-launch which will add online leaderboards.

We've had a chance to show off some very limited footage of Spec Ops in action, showcasing three levels during a gigantic hands-on article about a month back, but as a final hurrah before Modern Warfare 2's release in just a few short days,Activision has hooked us up with an exclusive look into one more mission.
Bomb Squad is set within the Favela locale, inspired by the shanty towns of Rio de Janeiro. Players will take a quick run through a similar marketplace within single player mode, but for Bombing Run Infinity Ward combined the bomb defusal concepts found in multiplayer game types like Sabatoge and Search & Destroy with a co-op, time-based challenge. Each level of difficulty -- regular, hardened, and veteran -- will yield varying challenges in enemy AI, and also an increasingly tight timeframe for you to work your magic.

The level begins with both players donning akimbo glock 18's, but there are plenty of weapons to pick up along the way as well including a small set of arms directly available from the outset. Laying on the ground when the mission begins are two sets of thumpers, AA12 shotguns with a heartbeat sensor, P90 w/Red Dot sights, and a set of M240 machine guns. You can swap out weapons right off the bat, or leave the stash for a mid-challenge return trip. I personally stuck with the akimbo G18's, but would swap out for the P90 when the time was right.

Bomb Squad includes three main bomb sites, each guarded by an opposing terrorist force. Most players will kick the mission off by making their way to point one, located on the Southeast side of the map, but from there have a few different options for the following two sites. The first bomb is located deep within a dead end market street filled with chicken cages, plenty of rooftop overwatches, and a steady stream of ground soldiers. 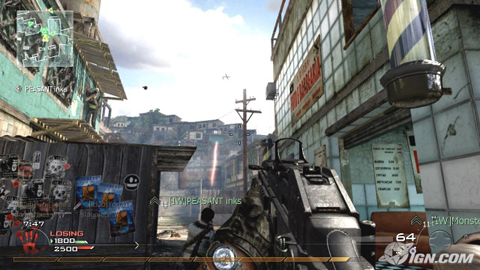 Remember Rio? You'll be back there again for a little Bomb Squad in Special Ops mode.

After clearing out the area and defusing the first bomb, players will need to make a quick sprint back up through the spawn and make a tactical decision for the final two points. The middle route will take the team down a main street filled with even more rooftop battles and very little cover. The far defuse area is more enclosed, located within a small storefront donning a makeshift basketball hoop, some high grass, any tiny main square. The team can either opt to break off and tackle one spot each, or continue on as a team.

In our time with the game we've found more success moving down the middle street as a team, capturing point two, and then moving to the last area all at once, or even using a side alley to flank the final bomb site. Since you can pick up downed teammates if you're within direct proximity of them, splitting up is a fairly dangerous tactic, though it'll reward you with a quicker overall time. Still, it's a whole lot safer moving through the crowded streets as a group, and while you're shoving your face into a laptop to defuse a bomb you'll feel far more comfortable knowing someone is watching your back. Running in blind and hoping for the best may work on regular difficulty, but if you're looking to collect two or three stars via hardened or veteran difficulties you'll need a partner, and you'll need to work together.

If you haven't already, be sure to check out our footage unveil for Bomb Squad, showcasing a side-by-side look into cross-system online co-op. It's intense to say the least.