Making a Johnny Outlaw level has never been easier. Check out the raw power of our new level editor. It will blow your mind.

As a self proclaimed high profile video game developer, people often confront me with their brilliant ideas for “the next big thing in gaming”. Bless their little souls; they truly believe that they can make it in the industry with nothing but their fantastic ideas which are, of course, entirely fresh and unique. Now, most other developers might tell you that these people are delusional: their ideas have absolutely no intrinsic value, their “games” are often untenable, unmarketable, and sometimes the ideas are simply stupid. But I would never say such things. Indeed, I would not be where I am today if I had listened to those developers.

Here is the truth, for all you big dreamers out there with your hopes of video game greatness. Those developers do want your ideas. They want to steal them! They want to horde all the ideas for themselves and control the flow of great games. As long as they can control who makes the games, they can make sure we have only bad, boring, no-fun games. They are afraid! Afraid that one day the market will be saturated with too many fun games created by great ideas. And the first step in their plan is to put you down and keep you down.

And how do they keep us dreamers down? I bet you think video games are hard to make, right? I bet you think it takes a dedicated team of programmers, designers, artists, composers, and years of experience. What if I were to tell you that this was all an elaborate lie constructed by the video game moguls? Would it blow your mind? Well then, consider your mind blown.

When I started making Johnny Outlaw, I was prepared to spend long hours, learning the basics step by step, and gradually creating something playable. I came in with no knowledge of computer programming and I had no idea how a game even worked. I took courses, read guides, tutorials. Hours became days, days became weeks. All to create something as simple as a game of pong. I had bought into their lie, just as you do now.

This was all poised to change. My studies took me deep within the sacred video game archives. I pored over the manuscripts, learned the different computer languages. I dreamed of one day being a true programmer, or “code talker”. Soon I could speak fluent computer and attempted to befriend the machines. I learned that they are much like us. They have wants, needs. They have dreams. They feel emotions, loneliness and longing. In time, I gained their trust. I was one of them. I talked to their chieftain and told him of the game I had seen in my dreams. He asked me what kind of game it was. I told him it was a top down shooter. I told him of the cowboys, of the buffalo. I told him of brother eagle soaring above and I told him of the almighty mountains kissing the horizon.

And then I told him of all the work I had done so far, and how it had been so fruitless. All I had to show was some basic graphics and limited game play. The computer tribe began to laugh. Had I made a fool of myself? Was I a poor programmer, unworthy to stand in their presence? No. The chief told me that I had been going about things all wrong. Video games were not hard to create! Not for a computer! You simply tell them what type of game you want, what sort of graphics, how much lag is acceptable, and then the computer would handle the rest. I was perplexed, but then the chief bestowed upon me a gift. He heard my pleas, heard about the cowboy game I wanted, and he had made it for me. That day I was given the gift of the Johnny Outlaw Level Editor.

Here, for the first time ever, I can show you a behind the scenes look at what really goes into making a game!


Is there any one among you who thinks this is “too hard”? Of course not. Video games are simple.

So next time you come up with a great idea that will change the face of gaming, don’t tell it to me! And don’t you go begging a programmer or artist to make it happen. Your ideas are precious and special and worth more than any simple service they could offer. Make it yourself, it’s not so hard. Speak with the computers, they will show you the way. 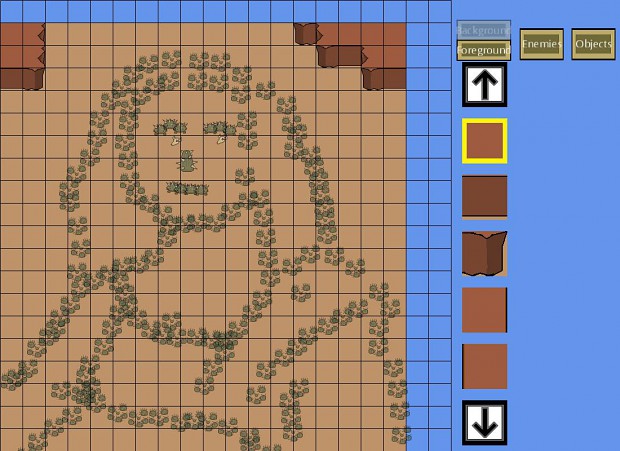