Post news RSS Clones - The Making of the Clones Character

One of the first things we realized when developing Clones is that we needed a really good design for the clone character to make the game more appealing. We decided earlier on, that the character animations would be sprite based so the question was whether we should get the animations drawn by hand, or to get them animated in 3D. After finding the right talent, we decided that the character animations will be modeled and animated in 3D as it allows for faster and better quality production of the final animations.

The first thing we did was to get our graphic artist to come up with 30 different concepts for the clone character. These were all hand drawn and colored. We then did a survey and we asked about 50 different people (friends, family, co-workers etc) to choose their top three favorite character designs. Part of the survey we asked to indicate their age and gender. Once the results came in, we tallied the votes and identified the top three designs. From the top three, two of us on the team chose the final design as a combination of two of the concepts (see below) based on technical and artistic merit. 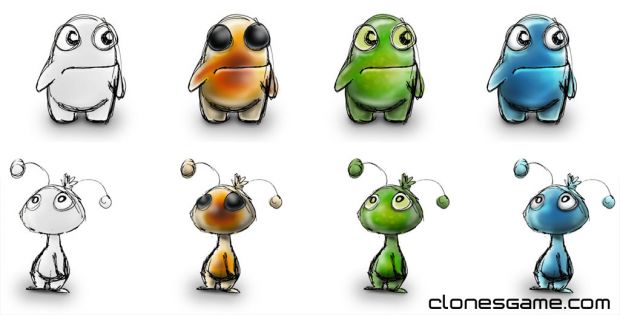 The reason why we chose the top design is because of the "big body" characteristic. Not only does "bubbly" design looks cute, but it was required for the characteristics of the clone. Clones have the ability to morph their bodies into different shapes. The body morphing wouldn't work well for a "thin" character. We really liked the head features on the second design because it allows more parts of the character to be animated (ie. the antenna bounce up and down while waking) and it allows more configurable features in our avatar creator. The final character design, after all the 3D modelling and texturing ended up as: 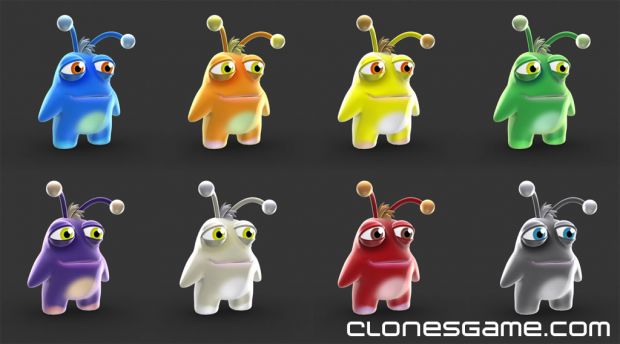 As mentioned earlier, the clones have the aiblity to morph their bodies to perform the action they are told to perform. This decision originated from the fact that we didn't want to introduce tools/equipment out of thin air (as done is many other games) but we explain it by giving this ability to the clone because they are made up of quantum goo. In total there are 10 unique morphs that you can give to a clone: Clob, Drill, Atomize, Spin, Puff, Mold, Lop, Doppel, Gulp, and Nova. These are shown in the video below:
Clones Game Clones Morphs Demonstration video - Mod DB

In total we have over 42 unique animations for the character for each of the 8 different colors (yes, that is a lot of animations files!) In addition to the Clones, we also have the CloneMaster characters in the game, but we'll leave that for another article :) Let me know what you think of the character design in the comments!

Another Lemmings clone? Wait... Clone.
Sadly this game doesn't seem to have many original ideas. Good map editor might give it longer life span.

well the little fat dudes look cool, but certainly not the type of game I expected it would be.
Personally I think it'd be better to make some sortof 3d adventure game out of this, but that's just me.

The graphics look quite nice, but the "powers" and the gameplay are straight rip-offs from lemmings. "10 unique morphs", give me a break. Where's the originality? At least make the powers reasonable; a fluffy alien using its fists to rip trough a wall? I doubt it. How about an alien using laser blaster? More like it.

Because aliens using laser blasters is a super original idea.

Clones is to Lemmings as Unreal Tournament is to Wolfenstein.

It's originality comes from the the inclusion of new features while keeping the core gameplay familiar to the awesome 2-player mode of Lemmings.

oh lol .. I had several tabs open and replied in the wrong window xD

Although seems a lot like lemons i love the art direction and gameplay looks really fun hope you succed.

Cool behind the scenes

Personally I don't mind seeing another lemmings style game however, that character could be used for something so much better.
Just think about a game like Stupid Invaders, that game was great!

I think the game looks great, and to be honest I'll wait until the release, until I make any real judgment.