A look into some of the new civics coming in the 1.2 update to the mod, and several announcements.

In this week's edition of the Civics Expanded+ dev diaries, we will be talking about some of the new civics coming in the 1.2 update. Now, like mentioned previously, this update will not be a massive update, like the 1.1 update, and it'll instead focus on making what's already in the game (and mod) better.

However, editing vanilla Stellaris files could cause compatibility issues when playing with other mods, in addition to this mod. So, there will be an announcement at the end of this article.

Of course, it is still a fairly major update, so new content is needed, and after all, it is Civics Expanded+. Five default civics will be added in the 1.2 update, the majority of which being based around authoritarianism. 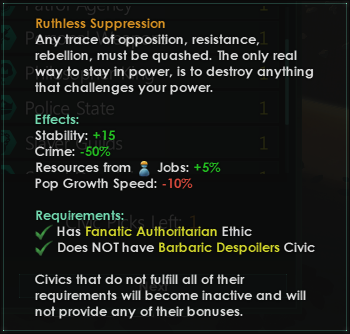 The Ruthless Suppression civic is available to Fanatic Authoritarians only, and, like most of the new civics added, has a negative part. In the future, more civics will have negative parts to even out the benefits, rather than just weaker benefits.

This is another ethic-based civic, but this time for Pacifists (and the democratic authority). 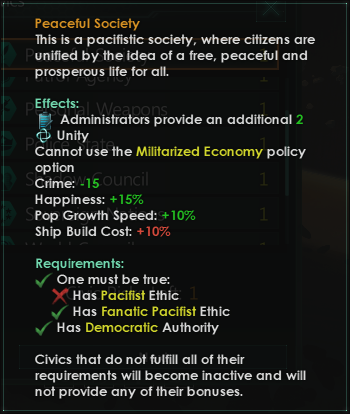 I figured that pacifists should not only get more civics, but better ones too, since, in my opinion, the pacifist ethics are a no-go. Mainly due to no unrestricted wars (or just defensive wars, for Fanatic Pacifists). So, while still following the trend that war isn't a part of a pacifist playthrough, the benefits to pacifists should attract players to choosing the ethic(s).

This is the odd one out; there aren't any ethic requirements, and is a much simpler one. 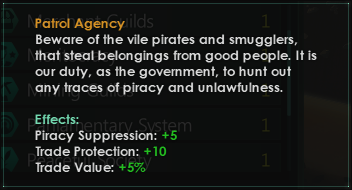 My inspiration for this civic was when I was playing a very large empire with many colonies, so, much trade value. But lots of trade value from lots of places means one thing: piracy. I constantly got pirates popping up, even with fleets patrolling sometimes, so I thought: "Man, if only there was a civic to make pirates less annoying!".

Then I realised that I'm the creator of a civics mod.

Note that the 'Piracy Suppression: +5' is quite misleading. It's due to Stellaris localisation, but what it actually does, is add 50 piracy suppression to every ship. 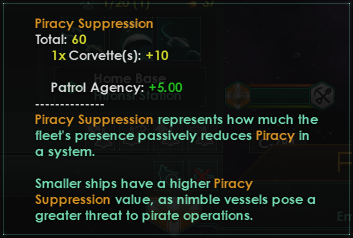 See how the base suppression for a single corvette is 10? Although the tooltip says there's a bonus of 5, if you look at the total, which is 60, it has to be a bonus of 50.

The last two civics will remain a secret. For now.

Now, about the announcement. The civics from the mod are obviously stronger and better than some in vanilla Stellaris. To fix this, we thought about buffing and changing the vanilla civics, but this could cause issues when playing with other mods that change vanilla civics too.

So, we decided to create a submod. This submod only changes all civics, and generic ascension perks too. If you're playing with this mod only, or mods that don't edit vanilla civics, then you can use the submod fine. If not, then just play without the submod.

Also, dut to some requests, there will be a civics-only version of the mod. That will also be updated -- it is the same as this mod, apart from the fact that there aren't any new origins, ascension perks, policies and edicts. The submod will also work for that mod.

The submod and alternative mod will release a bit after the 1.2 update is released, which will be on the weekend.

That's it for this week. A lot of announcements this time, no? Remember, the submod, alternative mod and 1.2 update will release on the weekend (not at the same time).