Factions? Oh yes! Find out more about the powers behind Companies (guilds) in CoS. This week: Arbiters!

This is a repost from City of Steam Cotent Dev Journals

If you’ve been following the forums, you may have seen Dave’s post giving some hints about the Companies and Factions expected for City of Steam. There will be five factions each vying for power and access to The Oracle. Today, we’re going to look at The Arbiters, the faction that rules the courts and oversees law enforcement.

Since the founding of Nexus, The Arbiters have acted to protect Nexus and enforce civilian rights, as well as protect Nexans from unwelcome outsiders. They are the Ministry of Law, controlling the courts, guards and even prisons to maintain a stable legal system. However, to join this faction requires strict devotion and they are easily outnumbered or overpowered if it ever comes to direct violence. Instead, The Arbiters play politics. Strategizing with more subterfuge than outright conflict.

The Arbiters began as a group of judges who excavated an artifact called the Fulcrum of Time from the ruins of the ancient Neruvian Ark. Following the guidance of the Fulcrum, they were able to determine a suspect’s degree of guilt or innocence. As such, the judges rendered surprisingly fair and just verdicts (scout’s honor!). As Nexus expanded, using the Fulcrum to adjudicate every legal dispute became impossible, so the judges decided to condense the principles by which the Fulcrum seemed to operate into a document known as the Song of the Founders. The so-called Song promotes peace, justice and social harmony through careful and considered analysis of intent and consequence. It forms the basis of the Nexan Code, although the Arbiters no longer have exclusive authority over its development.

The Arbiters administrate the city laws, preside over the courts, and maintain prisons. They play an active role in training the city guards, but do not directly manage them. Their policies and practices are extremely old, some would even say archaic, derived from the Song of the Founders. New recruits, even those with a background in the Nexan Code, are often surprised by the Song’s strictness. The Fulcrum itself is seldom seen, but it’s rumored that those that wish to reach the highest levels of the Arbiters must submit to its judgment. Those that fail a trial by Fulcrum learn the true meaning of the Song of the Founders… though no one has ever revealed what that really means.

Arbiters seek to enforce the ancient laws as laid out in the Song of the Founders. Although the Nexan Code has changed over the centuries, the Arbiters believe that only the Song can lead Nexus through the rising chaos in the world and into a new age of law and order. While some consider them to be old-fashioned and overly conservative (what are those ol’ coots up to this time?), their influence over Nexan law is undeniable.

The Supreme Justice of the Arbiters is a prestigious and powerful role, allowing the fortunate individual to have direct access to the Fulcrum. The fourteenth Supreme Justice and currently in power is Pheyd Lyrolenth. A draug without a house, Phyed arrived in Nexus as a teenager to live with the Soth family (sounds familiar…) as a houseless servant. Upon completing her term of service, her family’s charter in House Lyrolenth was restored to the Nexan Register. Finally free to pursue her own interests, Pheyd translated her years of disciplined service into a career with the Arbiters. 30 years later, she was inaugurated as the Fourteenth Supreme Justice of the Arbiters after exposing the now-legendary indiscretions of her predecessor. Her unerring judgment, impartiality, and reverence for the Song have served her well in her first decade of service, but some say her daily meditations in the presence of the Fulcrum have changed her.

Her meditations with the Fulcrum have always been considered eccentric at best. Now that they are becoming more and more frequent, there are whispers that she is not always as lucid and insightful as she usually is. However, even within the Arbiter faction, even the judges are strictly monitored. Outspoken or controversial judges have been known to disappear from time to time, only to return with reverted and often increased loyalty to the pure nature of the Song. For the time being, Pheyd Lyrolenth still maintains enough lucidity to lead, though there are many biding their time and waiting for her to slip. Some even within her own faction. 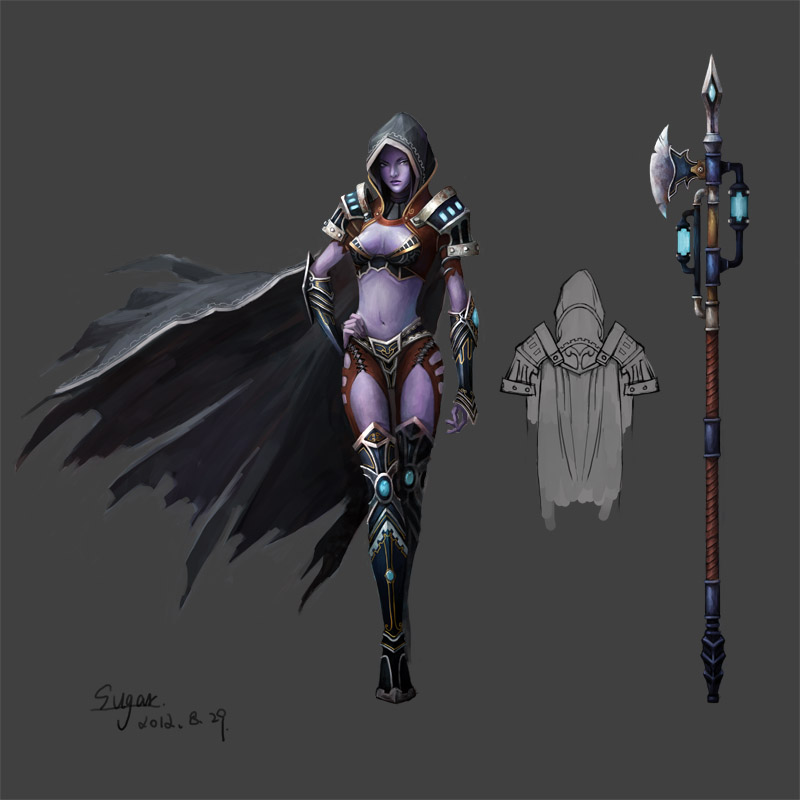 “We are the dividing line between right and wrong. We guard Nexus against dissent and rebellion, and ensure prosperity and safety for all. We serve as living exemplars of the Song so that all may live in peace. Though this Chronicle may prove to be dark, I will guide Nexus by the light of the Song and the justice of the Arbiters.” – Phyed Lyrolenth

The Song of the Founders casts some heavy judgment on the other factions and their own philosophies. For example, the Song is quoted to say that the Chroniclers quest for immortality must be justified by the possibility of eternal imprisonment. While there is some mutual efforts between the Arbiters and the Spireguard, all alliances for the good of the city are tentative at best as each faction vies for ultimate control. The Arbiters most adamant rivals are the Explicators, whose main agenda is to seek out anything related to the Paragons and destroy them. Arbiters often quote the Song of the Founders that “To deny the past is to destroy the future”, a verse which the Explicators do not look kindly on.

With the increasing contentions and conflicts between the Arbiters and the Explicators efforts to eradicate Paragon influences, many are relying on the wisdom of Phyed Lyrolenth to navigate the sensitive political waters. Though most Arbiters trust her judgment, there are many who doubt her ability to maintain civil relations with the other factions, and even some who fear that her excessive exposure to the Fulcrum to be too much for any individual to maintain their sanity.

Do you think Phyed will be able to maintain her grasp on reality long enough to deal with the other factions? Some of the other faction leaders may see this as an opportune time to push for further control of the city. This is a crucial time for the Arbiters, as they wait to see if their leader is up for the challenges of politics.

So! Next time, which Faction would you like to know more about? Let us know in the Forum!