Headtracking has been around sometime now. We've seen the eyetoy for the Playstation 2, and soon Project Natal. What about that old web camera you have? It isn't about the camera itself, just the software that drives it, even this can make Project Natal feel dumb.

This is an Episode 1 Engine feature, and we are currently porting over all of the code to the Orange Box Engine. It's been a bit difficult, but we've been getting help from the creator himself. The main feature we plan to implement is 3D space, and much to that effect, a real time scopr which we already have in-game.


It's like 3D, without the glasses. All done via some extra code, and a 10$ to 20$ web camera. As seen in the video the API is pretty smart, we've gone through some code to help track your face within a 2 second time frame, so the API gets used to where you commonly bring your head back too.

We've also been hard at work at adding Ironsights to City 17, which give a more cinematic gameplay feeling, and overall improves the quality of gameplay. 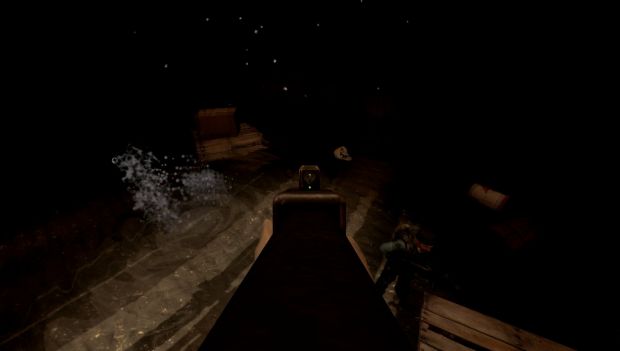 As an added bonus, you can also see our new water effects!

Haha, this is the most badass engine mod ever.

haha, that's pretty awesome, although i don't like the 180 degree turn as it's faster just to use the mouse.

We aren't going to use that, or it be: "NECK PAINS HERE WE COME!"

Hehe, that is pretty neat. This mod just got a heck of a lot more interesting!

Un-Beiliveable, all I can say is damn.

Are these your videos?

Very cool to see this coming to a HL2 mod. Can't wait to play with the results.

And it's good to see some Johnny Lee inspiration getting around. Johnnylee.net

No not ours, but the author of the original code for the API interface.

woah it makes it look 3d

I thought this was an ep1 mod why are you porting it to OB?

It's been Orange box every since the OB version was released.

I want...to put that in my mod. Wow. Did you guys purchase the development license or use the free one?

They used the free one. This is almost the same modifications made like the HL2 wii mod. Its all capable. Just needs a lot of programming know how.

Hm. It says that you have to release the sourcecode if you do that...how does that work out?

No license needed, just some code made by the man in the video, and a an in-built API manager for the engine to recognize the camera.

Awesome, but i really wish i could see some recent footage of this with your mod..

We've been porting it over, and having said that, run into problems doing so. We've been in contact with the author, but when we do get it going we'll make another video.

man that so cool i hope i dont break my neck

Only 3d space would be used, we kept ironsights to a button press.

Oh Bummer! I thought the Ironsight head tilt thingy was really sweet! Would you guys not reconsider that and maybe make it Optional for the player?

Anyhoo... Great to see this tech being integrated with a source mod like City 17! Now Watching! :)

That sounds like a good idea, maybe we can have this all controlled via options.

It pleases me to hear that you think it's a good idea! I personally reckon that the more options made available to the player to customize their preferences via this tech would make the City 17 experience so much more enjoyable and immersive in the long run! I can't wait to see how it all develops! ;)

Sorry for the low quality videos, moddb wasn't registering them as HQ.

Hi! My dial up modem takes forever to load these videos, so can someone basically tell me what this is about. Something to do with controlling HL2 with yur webcam i think.

Indeed, just simple head gestures, like looking through an actual window into a 3D world.

Awesome,
Instead of getting RSI in your hands, you can get it in your neck too!

Incredibly good. I can't wait to play this mod, you're doing a really good job.

I have to admit, the new water effect would benefit from the water being maybe more grimy? Fog, perhaps?

Damn it! I'm gonna have to by a webcam, whats a good quality one for this?

Excellent use of up and coming technology and existing game engine utilisation. Top marks...

lol great, now my neck can hurt even more while playing video games -_-

It be easier to sway your body then your neck.

hmm.. If you don't use to violent motions I think this would be better for you neck then just staring at the screen.

Incredible work yet again xD. The only thing i think is you guys are putting to much work into a mod why not just get licensing and just make this a game.

Because we are dead *** broke.

is there an API mod for hl2 out we can try? maybe just a plug-in type thing?

that was a stupid question^ ignore it.

This makes me want a a webcam.

This looks amazing! Creating the illusion of 3D space just by manipulating the camera? I can't believe no one has thought of this before!