Hey all, it's time for another devlog update!

Since the last time I have been taking a look at the Berserker class, as well as doing a lot of polishing, and bug fixing. I've also added some new content and I have begun preparations for a Steam Early Access release!

Let's start this off by taking a look at the Berserker and some recent changes...

The philosophy of the Berserker is high damage output and high mobility and crowd control capabilities.
This makes the Berserker a very strong solo character and at the same time a great supporter in multiplayer sessions.

While the philosophy was clear, the design and synergy of his abilities were not, so a lot of changes had to be made. First off, I split his abilities into two types: the very rapid hitting, and the slower hard-hitting ones. These are two different ways of play that will encourage players to seek out different weapons and different enchants, depending on which "tree" of skills they chose. You can mix skills between these trees in any way you want too, of course, and some passive effects and special items will encourage this.

The hard hitting skills were dubbed Wrath skills, and have a focus on large single hits, knockback effects, and high mobility. The mobility skills are offensive skills, not offering much in terms of survivability, so to balance that I also put a defensive skill called Embershield among the Wrath skills. This skill will increase your damage output by adding reflective damage to attackers, and keep you safe from pesky range attackers by having a chance to destroy projectiles before they hit you. Combine that with the mobility of for example the Shockwave skill which will make you leap to your target and knock everyone nearby back, you got both survivability and high damage output!

Jawbreaker, the first skill obtained in the Wrath tree

The rapid strike skills were appropriately dubbed Fury, and their focus lies in high sustained damage by either very rapid strikes or damage over time effects. The Fury skills doesn't offer as much mobility, but they do offer some crowd control and buffs, such as the Intimidation skill will cause nearby enemies to flee in terror. The most interesting method of survivability for the Fury skills is the Pummel passive ability. This ability will give all Fury type skills a chance to cause enemies to flinch and interrupt their attacks, thus allowing you to avoid damage entirely! Add the interruption ability to high attack speed, burn, and bleed effects, and you got yourself some serious pain going on.

Flamewrath, the final skill for the Fury tree

And with that, all four playable classes are ready for the release!

I've also worked on a new feature I've named Unstable Dimensions.
These areas are reachable through portals which can appear at any time when any monster dies, and are completely optional, but both highly rewarding and challenging. What makes these areas unique are that it'll be populated by pretty much any enemy from the game (including ones from future chapters) and they'll all be given a specific randomized power. It'll also be filled with treasure chests! The power chosen can be a very profitable one, such as making them all drop massive amounts of Crystals (currency) or items. But it might also be very lethal things such as giving them access to very powerful skills, or turning them all into giants.

Not only will you face some of the greatest challenges in the game here, but it is also hard to navigate, with a very confusing layout and limited sight. And once you leave it, it'll disappear forever. 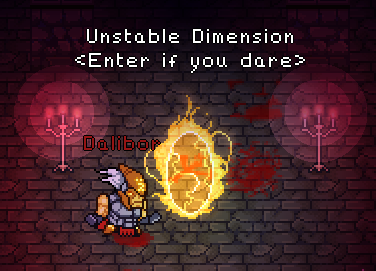 I double dare you

Aside from that, I've been doing tons of tweaks, bugfixing, polishing, and some performance upgrades.
But most importantly.. preparing for Early Access.

Chronicon will be available in a few weeks on Steam Early Access. An announcement with a set date will pop up sometime before that! The game will feature all four playable classes, 200+ items, 60+ skills, the entire first chapter of the game, and fully functional local machine co-op multiplayer for up to 4 players.
My original plan was to have the two first chapters available at EA launch, but chapter 2 has been delayed somewhat and will be added in the first major content patch.
However this patch will happen a lot sooner than originally planned!

Tell your friends, and stay tuned!