On one of my many quests into a used bookstore for lost tomes of lore, I stumbled across an old gamebook from a series I wasn't familiar with. There were a lot of these in the 1980s, after all - choose your own adventure, endless quest, lone wolf, starlight adventures, crossroads... oh, let me save time and link to gamebooks.org. There's a lot! I owned many of the things that I came across but certainly not everything, so finding a cheap old copy was an easy invitation to buy a new-old book.

In this story, you play a young woman who's training to be a sword-swinging adventurer. She travels across a landscape which clearly owes a lot of its design to Dungeons&Dragons, fighting monsters and discovering gold, with a little help from an elven ranger.

Despite being very similar genres, there's not a whole lot of spillover between western gamebooks and eastern visual novels. The CYOA crowd tends to think that visual novels are way too slow with not enough input from the player, not enough ways to personalise your experience and make a difference. The VN crowd tends to think that gamebooks are too shallow, with limited characterisation and arbitrary plots that have no consistency from one choice to another. Both of these arguments have some truth to them, but they're not always the case.

It happened that as I was reading this book I'd found, I thought "You know, this could just about work as a visual novel..." And then one silly day I leapt to the next step: why not? 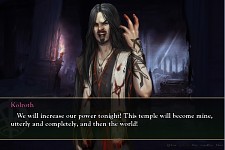 So I tracked down the original author and reached an agreement to adapt this story for a new medium. Instead of being just text and choices, we'd have illustrated backdrops, characters with varied expressions, musical soundtrack, special effects, all the bells and whistles of a visual novel. 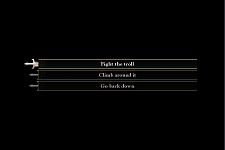 Nothing about the original gamebook has been changed, other than assigning dialog and character description to sprites instead of words. This is still very much a western fantasy world. To that end, I chose to go for a painted style of illustration rather than an anime look. I found an artist who'd done work for RPGs and hired her to create this world of dragons, elves, and treasure.

And yes, there is a bit of romance as well! But mostly, it's about adventure. And in the classic tradition of such books, making poor choices will soon lead you to The End 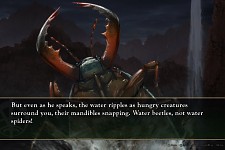 If you share my nerdy fascination for the fantasies of yore, please come check out Sword Daughter, now available for sale on hanakogames.com