Today we are showing off a render of the Centaur IV, an often overlooked partner to the more well known Cromwell.

Today we are showing off a render of an often overlooked tank in the British arsenal, the Centaur IV. 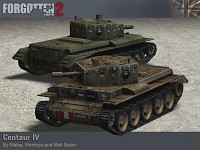 The A27L Centaur started life as an offshoot of the A24 Cavalier tank, which was a proposed replacement design for the A15 Crusader started in 1940 by Nuffield. The Cavalier had finally reached trials in 1942, and immediately showed problems with its underpowered Nuffield Liberty engine it inherited from the Crusader. While some were produced, none would see service outside of Britain. What would become the Centaur was based on a design to fit the Cavalier with the new Rolls Royce Meteor engine. Such equipped tanks would become the A27M Cromwell, but concerns over the production rate of Meteors lead to an updated Liberty engine being substituted.

The only A27L to see combat service was the Centaur IV, fitted with the Ordnance QF 95mm Howitzer. These served with the Royal Marine Armoured Support Group on D-Day, and were given distinctive azimuth markings around their turrets to allow their fire to be directed by an observer from the landing craft. Equipped with deep wading snorkels and with the hull MG blanked off to improve water-tightness, they were driven ashore and used for at least a few more weeks.

Our Centaur IV has been modified by Matt Baker from the Cromwell IV made by Malsa. Matt Baker has also updated the old textures made by Montoya of our Cromwell IV and VI.