In SORS you can collect cheat words to help you through the game!

I always loved the FPS games of old that would allow you to cheat really easily. Simply bring down the console, type ‘god’ and you were away. It wasn’t about using the cheats to beat the game (where’s the fun in that?), but about playing around with the game, all with a blessing from the developers, who made cheating so easy.

It’s those experiences from my younger game-playing days that inspired me to create the ‘cheat word’ system in SORS. Except this time, it’s all part of the game. The hospital CEO doesn’t like it, but the other doctors use them to help them with patients whenever they can.

Many games use things like money, points or power-ups as rewards for players. I decided to use cheat words. Besides, the player’s interface in the treatment room is a console, so it’s practically begging to have cheat words put into it!

Ahead of the game’s release, let’s take a look at some of the cheat words included in SORS. There are 2 types – one-off uses and permanent (ie: multi-use; obviously better but much harder to come by).

Who wouldn’t want extra time when seeing patients? Especially when you’ve got harsh government targets to stick to? (ie: see a certain number of patients in a short amount of time!)

A time cheat word will give you an extra minute to see patients. Handy! Sadly, though, only ever found in single use format.

Busy graph? Still can’t diagnose the patient? Wouldn’t it be nice if you could start again? Well now you can with this handy cheat word that (as you might expect from the name) clears the graph so you can start again. Comes in both variations. 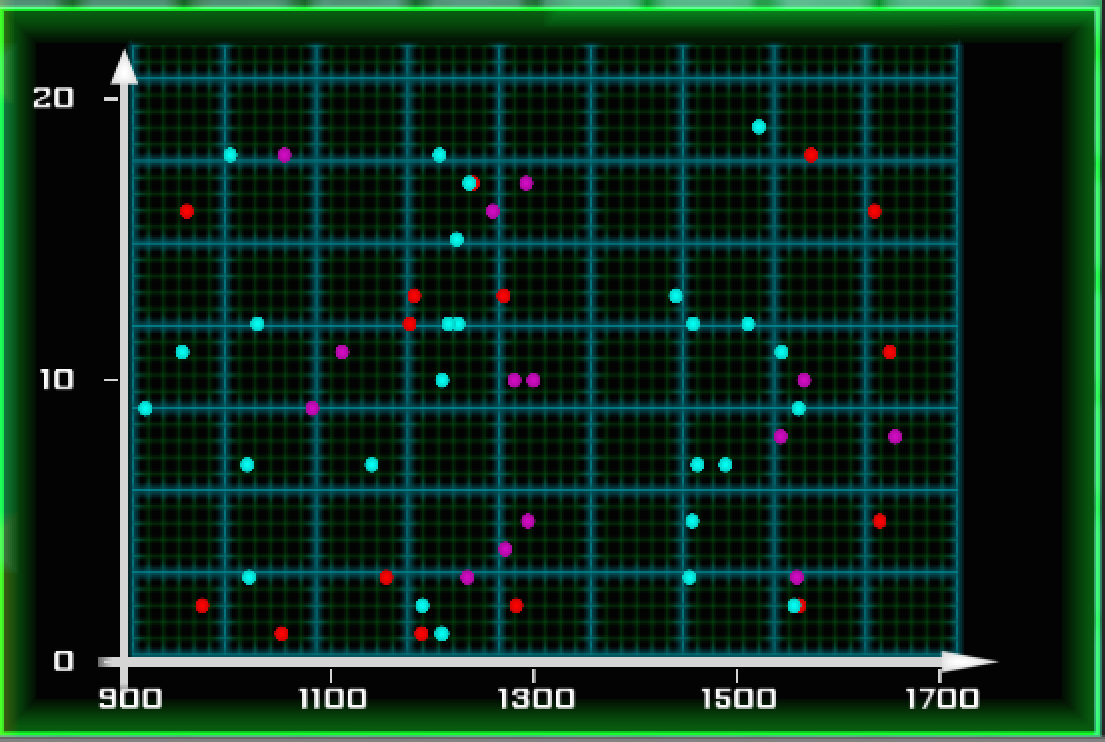 If you graph looks like this, you may want to start again

Scan noise refers to the tiny residual errors that exist in your machinery and lead to bad scan points (random points on the graph that you must ignore, but that also clot up the graph and look the same as other scan points).

Scan noise can be reduced through upgrades, but some levels see increased scan noise levels due to ‘other reasons’ (read: hackers). So these cheat words will come in handy for those instances. It’s useful, so sadly that means you can only find it in single-use formats.

How do I find them?

Cheat codes get sent to you via email. The words are also procedurally generated, so they differ between playthroughs. If you want to use them, you’ll just have to remember them when you’re in the treatment room (or write them down somewhere), as they’re not recorded anywhere but the email screen (which you can’t access when you’re with patients).

I thought having the player do this makes it more like they’re ‘prepping’ for patients, rather than having an easy in-game list of cheat words to turn to.

Players are also free to use cheat words when they want - keep them til the harder end levels or use them on the fly when you need them.

This ties in with other elements of the game. Although the graph patterns for different diseases are available in the treatment room via the diagnosis guide, it all takes time, which is a valuable resource. So if players can memorize these patterns, it’ll make their job much easier. Again, it’s all about putting the player in the mind-set of being a doctor – having that knowledge come naturally.

That covers a few of the cheat words (some of the juicer ones I’ve left out ;)). The next blog post will examine the moral choices the player faces in the game, and how they affect the gameplay.