Post news RSS Charm the pants off your enemies forcibly... with charms!

A look at Charms, the new special items in Zeran's Folly. New outfit previews, too.

There's a whole slew of new items to be found in Zeran's Folly: charms and outfits! Charms can give passive bonuses, power-ups on demand, and even special weapons! Find the alternate outfits for your characters to help you look good while you're stomping some monster mud-hole.

Here's a rundown of the different types of charms:

Enchanted Rings
These babies grant passive benefits when equipped. Here are a few of them:

Alchemical Stones
Equip these to have access to power-ups on demand! Get a load of these (cooldowns subject to change):

Special Weapons
Some problems can be fixed with finesse. Others, with bitchin' hunks of metal:

Runes
There are some character-specific charms too. They're kind of like talents! Here are some of Lone's:

Charms can be found in chests, bought from merchants, and earned by completing sidequests. Collect them all and wreck face or something! However, you can only equip up to four charms at once if you earn all your extra charm slots. Choose wisely!

Outfits
Playing dress-up just got a hell of a lot cooler. Much like charms, you can find outfits in chests, buy them from vendors, and earn them by completing sidequests. You can switch outfits at any Whisper Stone. Some outfits even have their own special benefits!

Take a gander at some of the cooler outfit concepts: Lone's "Walking Corpse" outfit: Skeleton Things are back and Lone can wear tattered rags and shuffle about just like 'em. Found in a chest. 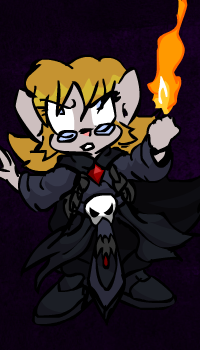 Lydia's "Arcanist" outfit: The Bellycutters are a thieves' guild but that doesn't mean they'll turn away sorceresses who want to get their hands dirty. Commit some wanton murder and destruction in these sweet threads. Earned from a sidequest. Lisa's "White Angel Armor" outfit: The paladins of the White Angel Order are renowned for their purity and resultant sexual frustration. Some of the most promising paladins attempt to ascend to Sainthood and earn their magical White Angel wings but few survive the rites. Now that the Sea Dragons are gone, why not see what's out there? Earned from a sidequest in the Epilogue. Abby's "Rogue Armor" outfit: Surprisingly conservative for the Hideout's biggest little slut. Rogue Armor is the toughest outfit in the game to earn, requiring finding several prerequisite pieces before the final outfit can be assembled. But, because it's the hardest to get, that means it's automatically the best.