There has been a lot of menus and boring things added. Which isn't that exciting, but it was really nice to get character creation out of the way so I can start adding more of the content that I'm interested in into the game. Keep reading for more specifics about what was added and send me a message please if you're interested in testing.

Slow but steady progress on the menu front. I'm trying to get all the boring stuff out of the way very very quickly so I can get back to working on quests and bosses. Those menus are subject to change, I just wanted to get them out and functional before I spruced them up later. 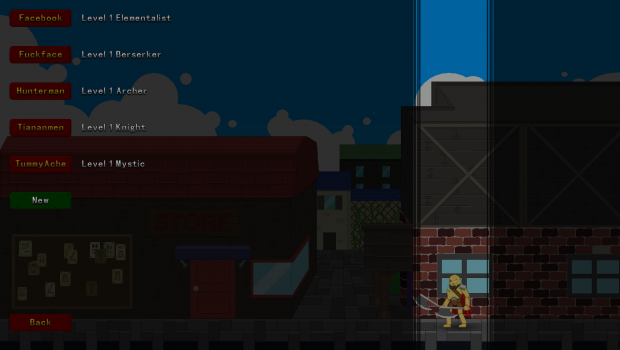 Last week I finished character creation and saving, which was quite a big deal because only half the RPG elements were in place so some of my server had to be reconstructed. Also added in the quest system. Right now quests are boring "Kill X Bad Guys" but will evolve into aiding NPCs to complete objectives, keeping items away from enemies, solving puzzles, and more fun things. 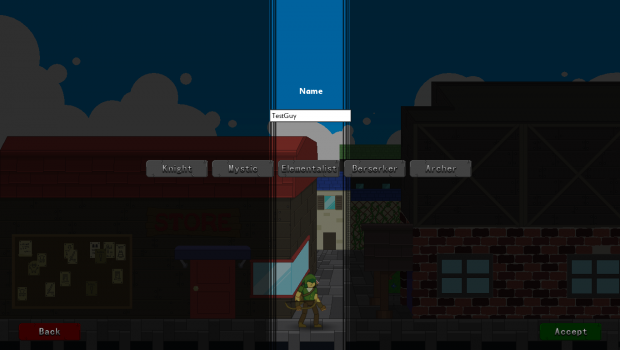 The game is almost to a stage where it could be handed out to people without me babysitting them and telling them what order they have to do things for it to not crash or break. So I'd really like to get an alpha of the demo out this month with just the Clock Tower stage to iron out some bugs.

Be sure to send me a message or reply here if you'd like to be a part of these tests!

Interesting. I'd love to test it out and find bugs. I wonder what kind of Coop Aspects you'll use to make quests unique.

I've got a lot of things planned. There are going to be generic Kill 10 Knights or whatever quests as an option, because those can be fun and are good practice to get ready for boss fights.

But just as an example there will be a quest where the team has to protect an egg for a certain amount of time and enemies will attack the person with the egg. If you're attacked too much you drop the egg, but can also toss it in the air for another player to pick up while you switch to killing and slowing down enemies.

I also thought up a quest where an NPC needs you to kill particular slimes and will yell out which color slimes he needs. But he's too sophisticated to just say "Red", he'll say things like "Auburn" or "Cerulean" and the party will have to figure out which color that is.

I'm hoping to develop a storyline with reoccurring NPCs kind of driving it inside the key quests.