It came to our attention, that some people fear, that we might have stopped working on the Dark Pastime modification. It is not secret, that the last month was somehow full of different events for all of the members of our team, though this never meant, that we seized to create things for our story and develop maps.

Last year we decided to work on the mod differently – instead of releasing the whole project at once we would like to upload it in parts, starting with Chapter I, which would explain the adventure of Kyle Katarn and why it is different from his previous operations.

Before I continue advertising Chapter I, which is dedicated to the conflict between the Republic and the former Empire over Ord Mantel, I would like to post a few new things, which will be in DP as well.

One of the Chapters in DP tells us the story of the mysterious grave robbers clan from the planet Rutana (mentioned prior). The members of this organization ally themselves with no one and their primary goal is to regain control over their sector in the Outer Rim and stay away from
large conflicts.

Their operations are very secretive, but it is known, that they like to trade rare items and weapons, and they are especially keen on historical artifacts. The true motives for collecting such things aren’t known, and the Rutana clan actually welcomes traders and travellers, as well as fugitives and pirates in their tiny spaceport among the sandy rocks. 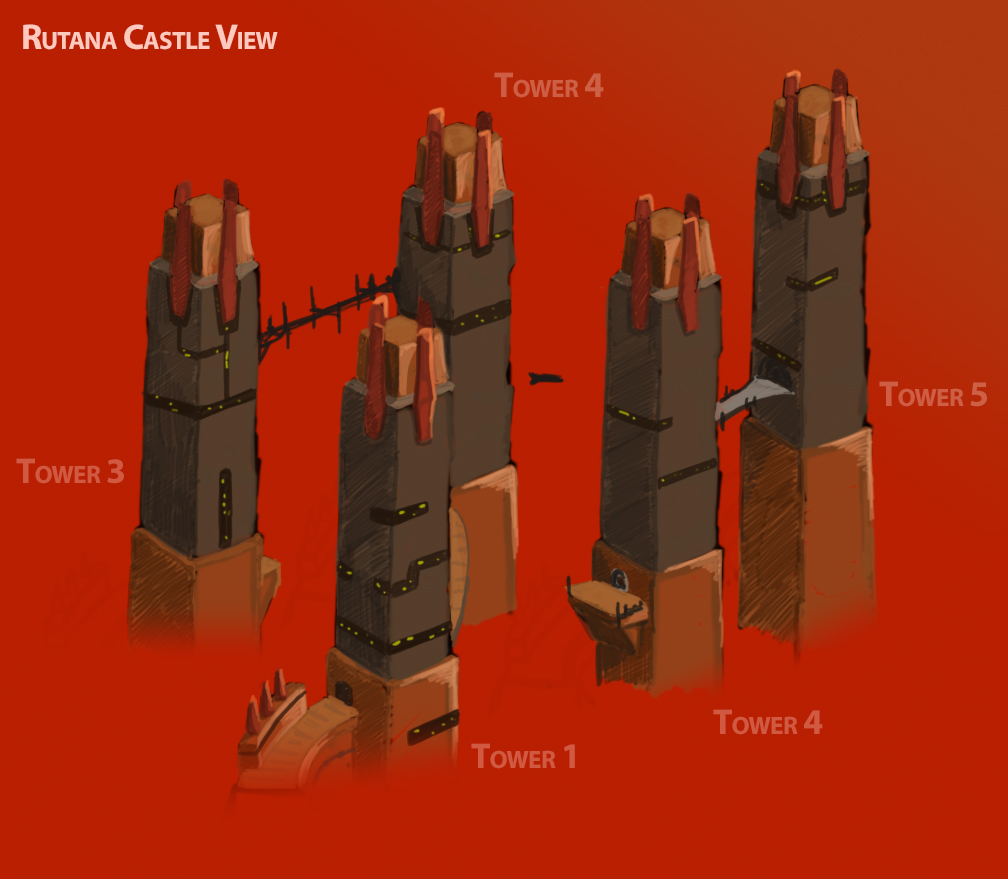 While Rutana are far from the most known star systems, their members are believed to have been spotted on several worlds. Some indicate, that the organization has been involved in smuggling several relics from such planets like Chandrilla and Dathomir. But no proof suggests this theory is
true.

While we haven’t created any new model for the Clan members themselves (just yet), we made the maps for this mission (you might have seen them earlier) and various props. One of the latest is a Rutana vessel. 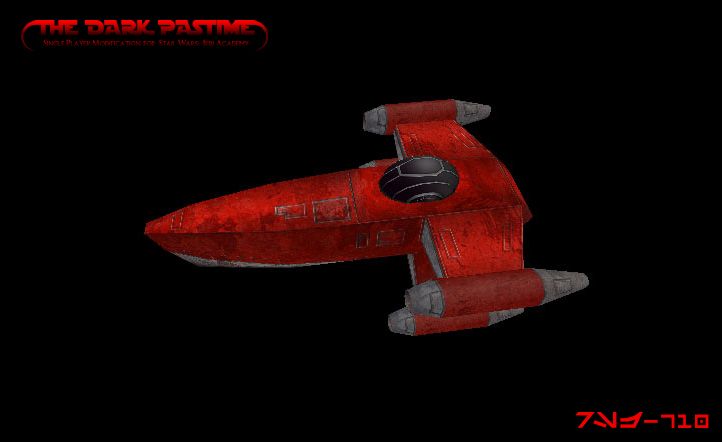 I designated this ship as RSJ-710, which serves as a light starfighter. It has a few weapons, concealed to look as a merchant vessel. However the main aim of this one is to store and transport the historical artifacts, not very large – this is the primary interest in getting relics – usually illegally from different star systems. The Clan members use it to travel to such planets like Dantooine, Onderon and Cato Neimodia to complete their tasks from their leader. 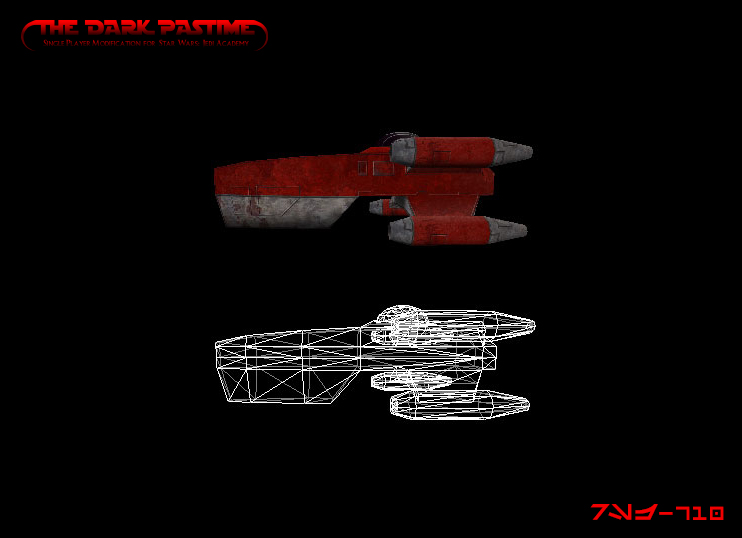 This part of current article deals with Chapter I. Kyle has a mission regarding a certain action, conducted by the Empire some time before the events of DP. The story takes the protagonist to the Imperial world of Dvorn. Imperial fans and followers as well as those keen on Dark Forces might
find this part especially intriguing.

Besides being a classic-like level pack, it shows not just the other side of the Galactic Empire (e.g. ordinary citizens, Imperial cantina, troops and officers off duty, etc), but also the way the Empire treats the most prominent Galactic events.

This is shown through very many props, objects and propaganda posters around Imperial locations. I also made a large set of datapads and terminals, which give an alternative vision of what happened near Yavin IV, at the battle of Endor or during the Clone Wars.

One such location, rich with Imperial information on Galactic affairs, is the Museum of Imperial History and Propaganda, located on Dvorn, which Kyle will visit during his second mission. 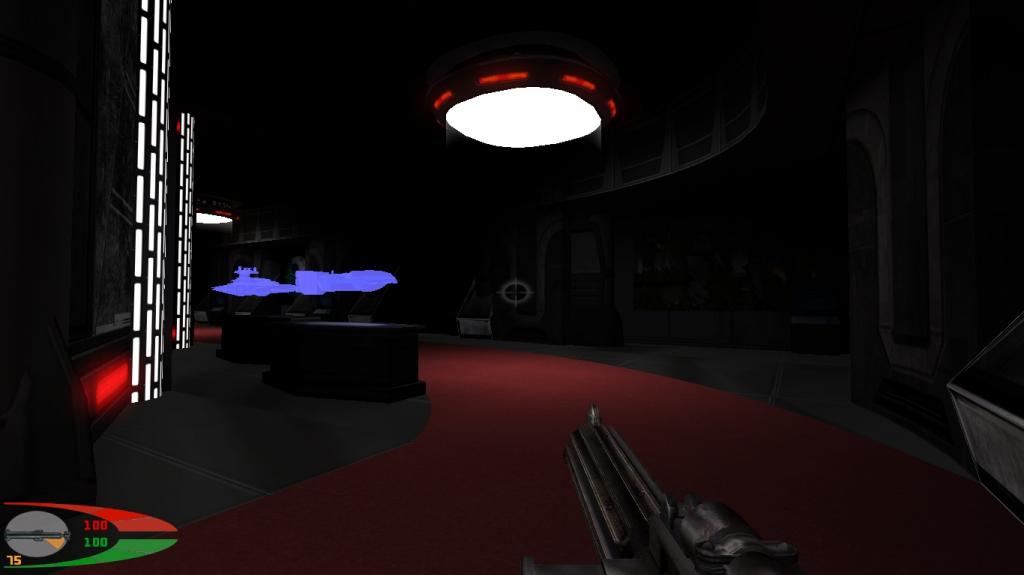 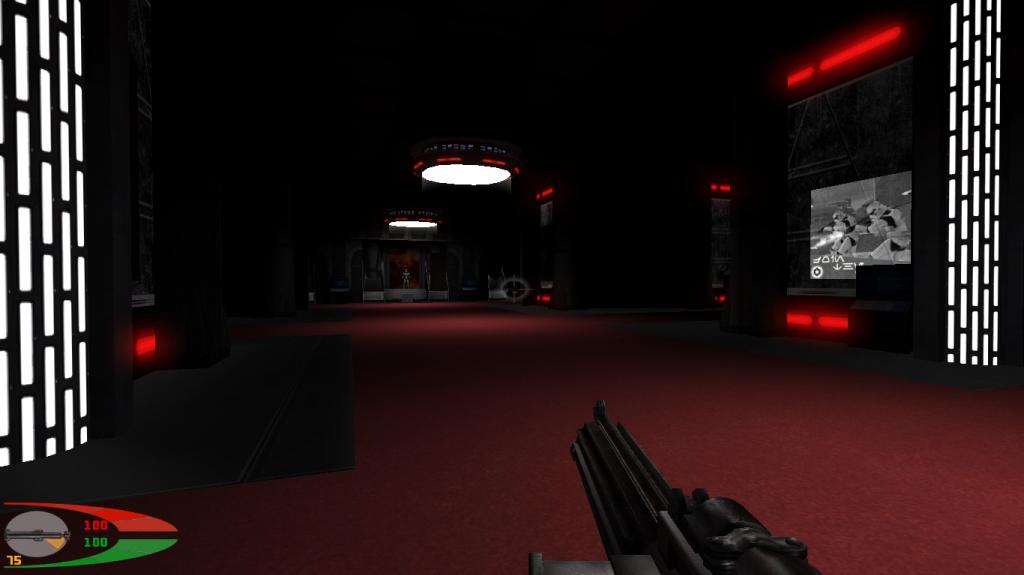 I really wanted to post an additional portion of news here, with pictures, but it will be a bit later. I can say, that we've added quite a lot of different aliens into DP, but there are more on their way. Besides the Elecrians, which you've already seen, there will a few more, including the mysterious Fuark representatives, present on Anarmar (meet them in Chapter II). Also several agressive beings, previously unseen in Star Wars.

Someone from SWTOR will be present as well.

So, when is Chapter I ready?

I don’t want to stir things too much, mainly because the “turbulences“ of the last three months haven’t passed just yet. Three maps are 100% complete, one more is on the way. One of the maps is 80% finished, but we have one more, which needs a thorough examination and correction. Due to JA
limitations the map might be revised and changed (I even feared, we might have to cut it like two other maps in DP).

In any case I already have an exact release date in mind, but everything will be announced in due time.

My goodness! I love the ui, so classic! Screenshot looks great! Looking forward to Chapter I!

Cool! I'm looking forward to more. DF, DFII, and MoTs were the best games in the series. I'm pleased you've returned to the roots.

thanks for continuing.Keep On you are our only hope for Jedi Knight .

I have a question:
I've heard that some people are making a new engine for Jedi Academy. what if you use that engine ? is it possible to make those scraped maps with that ?

I am not quite sure. Do you mean a specific team, working on it now? If the engine enhances the graphics, what would prevent anyone from bringing our material to it to see a better image? I would like to, but I am more a creative type, rather than a coder.

Thanks everyone for your comments. ;) We'll try to do our best, so that the mod would bring something new into playing Jedi Academy.

About that new engine(it's name is openJK) I found this Forum:
Jkhub.org