We’ve said from the very start that we hope to be able to include a level of character customization in Super Hematoma that will help add some depth to the multiplayer experience. We’re still not 100% sure how many people will be playing simultaneously in any given match, but we’re hoping it will be a lot. Therefore, we want to provide lots of options to choose from.

Let me take a moment to side track and shamelessly plug the Bundle In a Box contest that we're currently part of: there's a new indie game bundle for sale right now over at Bundle In A Box. Anyone who buys a bundle (bundles start at $2) can vote on which nominee they would like to receive the Indie Dev Grant... money which accumulates based on the number of Bundles sold. Note that our game is not for sale, but we are nominees for this Dev Grant. The prize money won't be much, but if you're interested in the bundle in a box, we'd sure appreciate it if you voted for Super Hematoma to receive the grant! Now, onto our development:

We've said from the very start that we hope to be able to include a level of character customization in Super Hematoma that will help add some depth to the multiplayer experience. We're still not 100% sure how many people will be playing simultaneously in any given match, but we're hoping it will be a lot. Therefore, we want to provide lots of options to choose from.

I'd tried to plan out a big schedule back in December of what needed to happen when, but let's just say we haven't stuck 100% to schedule. Things definitely take longer than we'd originally though... but of course that's how it is. That's how it always is. I'd started working on the painting of our first stage back in February(shudder), and finally got around to finishing it up this week. That took me this long because I hadn't done any painting since early 2010; I'd never really done pixel art before; and because my time gets spread out across many tasks at once rather than ever just focusing on one given thing. So when it's all said and done, it took me a little over 50 hours to go from rough sketch to finished painting on our first stage: The Oil Sands. You can see a bit of the process below.

You can see that I went through a good amount of experimentation whilst trying to figure out exactly what I wanted. Though pixel based games are typically tile based and use lots of repetition, I wanted to keep the tiling to a minimum. There's some in there, mainly because the amount of time and tedium it takes to paint rock after rock, and cloud after cloud, really was starting to wear me down, but I feel like it's a good compromise. It was originally going to be much brighter and sandy... but after looking at reference of the Alberta Oil Sands, I just wasn't feeling the golden colors as much... nor the way the platform in the middle felt as a sandy instead of a rocky material.

In my opinion, it's going to be an interesting level. It's heavily inspired by the idea of having just a small amount of "safe" area where people can duke it out. The subtly sloshing oil sands that bruisers can wade through can also be ignited if someone were to use a weapon such as a molotov cocktail. I'm pleased with how I've got the oil moving as an overall effect, and with the splashes that happen as a character moves through it, but I'm still working on a method for setting the level on fire.

So, as I said, I'm frequently shifting my attention all over the place to try and work stuff up equally. While working on this, I was also trying to figure out the effect of getting the oil to move around, and working on character animation. We've got a good number of cycles roughed at the moment, but we're kind of in an R&D phase right now to sort out the logistics of how to make the characters look the way we want them to. 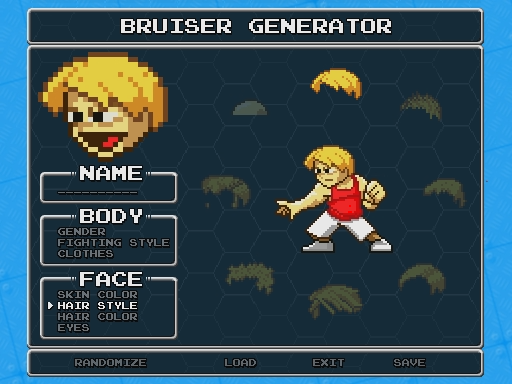 You can see that we began prototyping the character generator, but we still need to figure out exactly how to do the things we want to do in-game before I resume the animation. We need to be able to composite different hairs, eyes, and bodies together, and then do palette swaps on the fly in the game software to be able to make this work the way I want. I could manually create sprite sheets for all possible combinations but, as you can imagine, given all the different palette options for hair and flesh, and the potential number of different hair and eye combinations... that would be a terrible way to spend my time:

But the mixing and matching of parts is just one aspect of what I’d like to have happen. Artistically speaking, I’d like there to be some unique linework on the characters. This means that blond hair, or a red shirt would have outlines that are darker versions of whatever their base color is. Like this:

Though what I’d really like is to take that one step further and get all the absolute outlines to be black. Like this:

Which because of the nature of our custom body parts…to accomplish this would mean that Matt’s going to need a way to do some real-time generation of outlines in the software. Otherwise, I’ll have to do a compromise, and manually color all the lines like this:

Notice that the black outline surrounds the whole head, and not just the body in that example? The same would be true if the character is holding a weapon… which in my mind isn’t ideal. I could live with it, but on-the-fly outlining would be my personal preference. So what’s next on my plate?