Started to change some of the default quests. Uh oh...

Currently doing a final pass on all NPCs to add ‘ambient’ conversations that are not quest critical. However while doing so I started to muck about a bit with the original ‘default’ quests. Meaning their dialogue, and more specifically, the hiding places/locations of vanilla Ultima IV items. 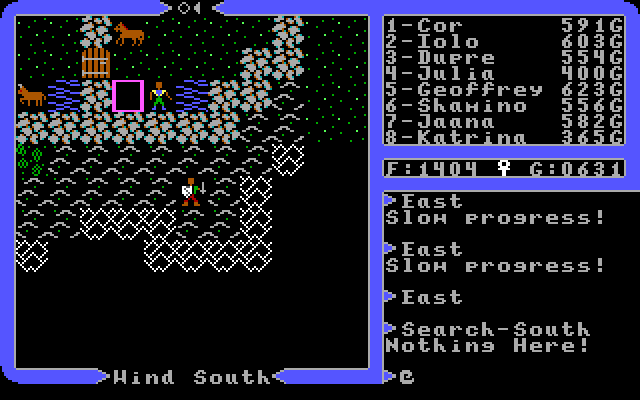 Hey! I remember there was supposed to be a rune here! What gives?!

I started out with a plan to not touch any vanilla or ‘default’ aspects of the game/quests etc. However, I feel that the current size of the ‘mod’ necessitates some adjustment of default/vanilla settings.

That is my basic feeling. However, I could be wrong. Maybe fiddling with these default aspects is the wrong route?

I’m not certain. Because more fooling with these default settings could lead me into changing default values such as mantras, words for the axiom etc. And at this point that seems like too much. But…would make the whole game new again to whoever played it. They would actually have to play it and rediscover everything, once again. That could be fun. Couldn’t it? 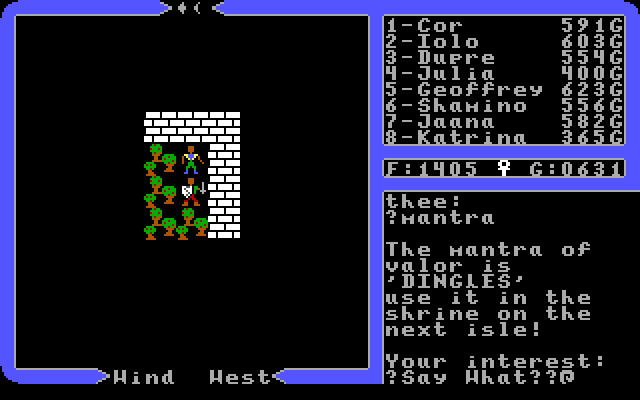 I have found the mantra of Valor!!

I am also thinking of cutting Random Encounters. It is going to be a lot of work, for a very tiny pay off. The average player might only ever experience a couple of them. They are going to be non-critical. And how many people, really, are going to play this? 5? 3? 1!?!?. If I drop them, I can see the completion of the mod/game on the horizon. In sight.